feature-u is a utility library that facilitates Feature-Driven Development in your react project. It provides tangible assistance in promoting features that are truly plug-and-play.

You can quickly "come up to speed" with feature-u by viewing the Playful Features Video, that builds concepts, and demonstrates them in a real world app (eatery-nod-w).

Feature-Driven Development (FDD) has become more prevalent in today's landscape, and for good reason! This is a lightweight Agile technique, manifest in a project structure where your code is organized by what it accomplishes (i.e. features), rather than lumping all modules of like types into separate blobs of components, routes, logic, actions, etc. This technique greatly improves your code comprehension because there is a direct correlation between the problem space (the requirements) and the implementation (the code)!

Most developers would agree that organizing your project by feature is much preferred over type-based patterns. Because application domains grow in the real world, project organization by type simply doesn't scale, it just becomes unmanageable!

However, FDD involves more than just organizing your project's directory structure into features. You want to encapsulate your features into isolated and self-sufficient modules, and yet they must also be able to collaborate with other features.

Truly isolated FDD is something that is incredibly powerful! You can improve the modularity of your system by loosely coupling your features, making your app easier to understand, develop, test, and refactor. If done right, your features actually become "miniature applications" that simply plug-and-play (where the mere existence of a feature dynamically exudes the characteristics it implements)!

As it turns out there are a number of hurdles to overcome in order to accomplish this. Rather than being left to fend for yourself, feature-u has already tackled these hurdles.

feature-u promotes a new and unique approach to code organization and app orchestration.

feature-u opens new doors into the exciting world of FDD. It frees you up to focus your attention on the "business end" of your features!

The basic process of feature-u is that each feature promotes a Feature object that contains various aspects of that feature ... things like: the feature's name, it's Public Interface, whether it is enabled, initialization constructs, and resources used to configure it's slice of the frameworks in use.

In turn, these Feature objects are supplied to launchApp(), which configures and starts your application, returning a Fassets object (which promotes the Public Face of each feature). 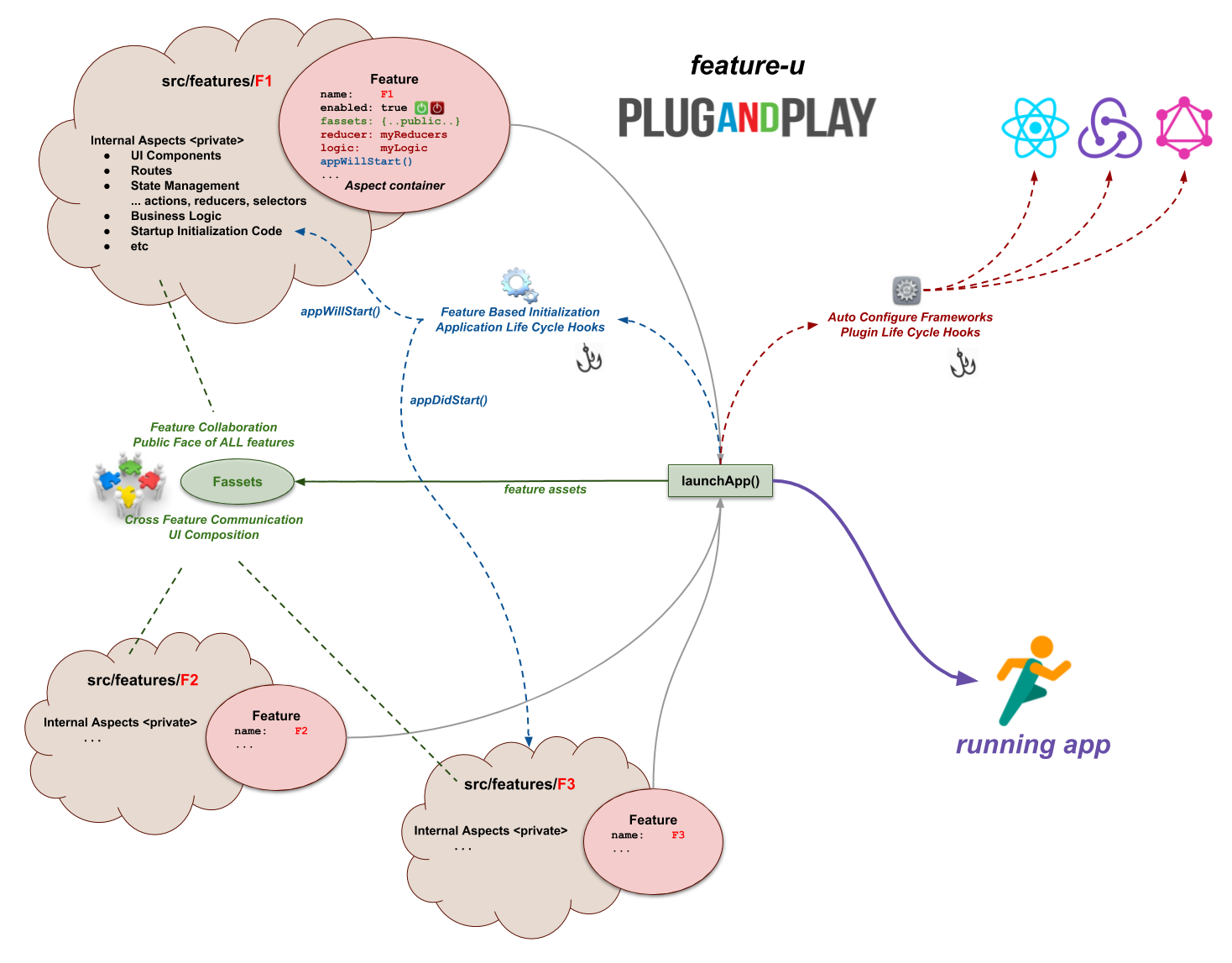 A fundamental goal of feature-u is to automatically configure the framework(s) used in your run-time-stack (by accumulating the necessary resources across all your features). Because not everyone uses the same frameworks, feature-u accomplishes this through Extendable Aspects (you can find them in external NPM packages, or you can create your own). The interface to your chosen frameworks is not altered in any way. You use them the same way you always have (just within your feature boundary).

The basic usage pattern of feature-u is to:

Here is a sample directory structure of an app that uses feature-u:

Each feature is located in it's own directory, containing it's aspects (actions, reducers, components, routes, logic, etc.).

Each feature promotes it's aspect content through a Feature object (using createFeature()).

The docs will fill in more detail, but for now notice that the feature is conveying reducers, logic modules, routes, and does some type of initialization (appWillStart/appDidStart). It also promotes something called fassets (feature assets - the Public Face of a feature) with openA() and closeA() functions which will be publicly promoted to other features.

Note: Feature directory imports are redirected to the feature object reference ... for example:

In feature-u the application mainline is very simple and generic. There is no real app-specific code in it ... not even any global initialization! That is because each feature can inject their own app-specific constructs!! The mainline merely accumulates the Features and Aspects, and starts the app by invoking launchApp():

Here are some important points of interest (match the numbers to *n* in the code above):

Hopefully this gives you a basic feel of how feature-u operates.

The sample above just scratches the service!

Comprehensive Documentation can be found at https://feature-u.js.org/, which includes both a Dev Guide (building concepts with full and thorough examples), and a complete API Reference.

The benefits of using feature-u include:

eatery-nod-w is the application where feature-u was conceived. It is a react-native expo mobile app, and is one of my sandbox applications that I use to test frameworks. I like to develop apps that I can use, but have enough real-world requirements to make it interesting.

eatery-nod-w randomly selects a "date night" restaurant from a pool of favorites. My wife and I have a steady "date night", and we are always indecisive on which of our favorite restaurants to frequent :-) So eatery-nod-w provides the spinning wheel!

When grasping a new concept, it is helpful to see it in action!

You can quickly "come up to speed" with feature-u by reviewing the Playful Features Video.

This is a screencast video of a presentation that has been given to a number of regional conferences and local meetup groups. It closely follows the Basic Concepts section, and demonstrates the newly developed concepts in a real world app (eatery-nod-w).

I hope you enjoy feature-u, and comments are always welcome.