This library provides custom Node-RED nodes for some of the most commonly used Victron Energy products. The aim is to make it easier and faster for users to create automations without actually having to touch any of the devices' internals.

This library is made as part of the "Add Node-RED to Venus OS"-project: which is about adding Nodejs, npm, node-red and more all into the Venus OS images. Manual here and issue here.

This library is not officially supported by Victron Energy: don't call our dealers or other support channels for help.

For any questions or help, please turn to community.victronenergy.com. Pull-requests are willingly encouraged!

Requirements when self-installing this node palette

More details in the instructions. 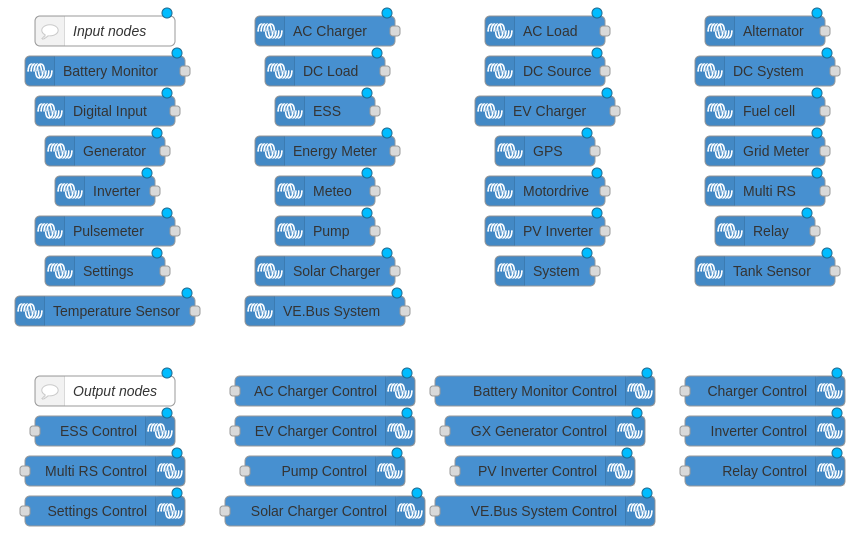 Node-palette - Input nodes on the top, output nodes below,

Here's an example on a functional flow with the Victron Nodes. More in-depth examples and use cases can be found in wiki/Example-Flows.

The input nodes have two selectable inputs: the devices select and measurement select. The available options are dynamically updated based on what sort data is actually available on the Venus device dbus.

The measurement unit type is shown in the measurement label in brackets, e.g. Battery voltage (V). In case the data type is enumerated, an approppriate enum legend is shown below the selected option. 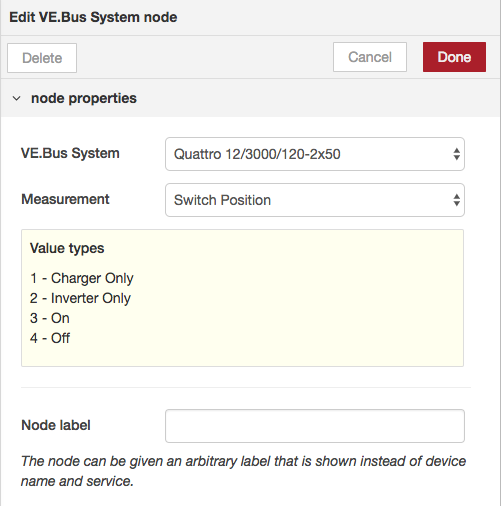 Input Nodes have the same options available, but the selectable 'measurement' only lists writable services. Additionally, the user can set an initial value to the service, which is sent whenever the flow is deployed.

All output nodes should have the control value set in its incoming message's msg.payload property. 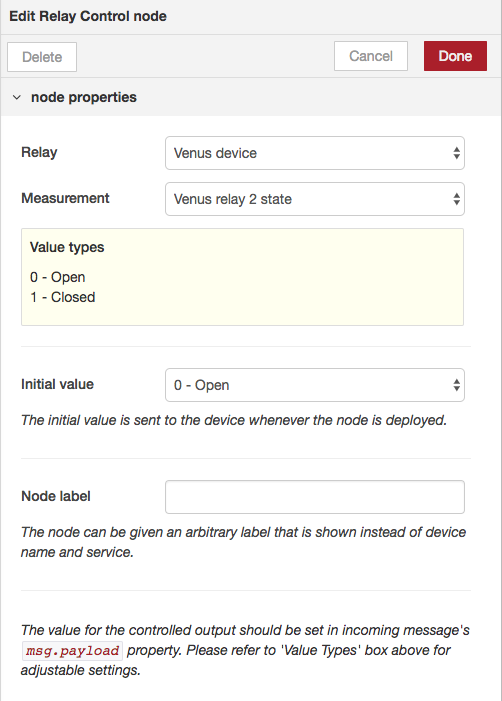 Please head to wiki/Example-Flows for example flows implemented with the Victron Energy nodes.

All the individual nodes (inputs / outputs) will use a singleton instance of a Victron Config Node to access the system dbus in a Venus device. The nodes will provide an easy-to-use interface for accessing various measurements and writing data to the system.

The following graph demonstrates the architecture of this plugin.

NOTE: these instructions are about how to install and make this node pallette working on your own Node-RED installation. Make sure that is what you want and need. The more common solution is to use Node-RED already pre-installed inside Venus OS.

WARNINGS: (A) Only do this on a trusted network. Exposing D-Bus to TCP is not secured - anyone on the same network can do anything he/she wants after enabling this setting. (B) If you do below change incorrectly, the GX Device will no longer boot correctly and will also not enable SSH nor Remote Console anymore. Also the GUI won't work; nor will anything else. Basically its rendered unusable, until either debugged via the serial console using a serial console cable; or reinstalled using an factory installation image on an sdcard. Note that after factory installation, certain files must be put back in order for, for example, the wifi to work again. There is no complete documentation about how to restore those, but the information on older revisions of this page will at least help: Venus OS Extended manual - Repart. appendix. (C) below modifications are on ones own risk. We'll help where possible; but there are only a few people available within Victron that can help; and they won't be standby all the time to help with issues like this: only do this when you (I) are not in a rush when it goes wrong and (II) are technical and know what you are doing. To get help, you could try the issues, as well as the Modifications section on Community. (D) Remember that a firmware update of the GX device will override below advised (and any other) changes to the rootfs.

To make above this change, you'll need root access to the GX device.

With all those (important!) warnings out of the way, here are the steps to locally install Node-REDand this plug-in. As well as the step to Open up the GX device, so that it can be communicated with remotely by this node-red plugin:

Further information on nodered.org and this other project that requires the same mod.

All the nodes use a manually generated services.json file to figure out what dbus services and paths to expose to the end-user. This file is used to e.g. render the labels to the 'Select measurement' dropdowns in node-RED's edit view. Please note, that this file is not a full representation of all available dbus paths -- rather, a subset of services and paths that the node-red nodes actually use.

This services.json file is generated using the parse-services.js script in ./scripts directory. The script uses two CSV files, dataAttributes.csv and dataAttributeEnums.csv, as its primary source to generate an up-to-date listing of available dbus services and dbus paths for Victron Energy's devices.

(Unfortunately, the CSV files are not committed to the repo for now -- if you need to update the services.json, please ask for the CSVs from Victron Staff or run the parse-services script with the --append switch).

The parsed services and paths are filtered against a whitelist (service-whitelist.js) before saving the file in order to get rid of undesired or deprecated dbus paths and only reveal the paths actually relevant to the VE nodes.

A few modifications to the code are needed in order to add new nodes (or new paths to existing ones). Here's an example on how to add a new input node victron-test. It uses the dbus service com.victronenergy.settings and has one option for a path /Settings/TestDbusPath.

You can use the --append switch to completely bypass the whitelist, missingpaths.json and csv parsing. This is useful if you don't have access to the CSV files. This will simply merge the given input json file with the existing services.json: node parse-services.json ./additionalPaths.json --append.

Besides that it is also important to update the wiki:

Assuming you have the wiki cloned as well in ~/git/ directory. Review and commit those changes too.

Below procedure makes a new version, and also updates all dependencies as recorded in package-lock.json. And includes instructions on how to update the corresponding npm-shrinkwrap.json which is maintained in meta-victronenergy. Doing that is important: in Venus OS, the dependencies are installed exactly as recorded in the shrinkwrap file. Which is different from how an npm install normally works. This is done to have reproducible builds; and makes sense when you think about it.

To only make a new release, without such refresh, the following steps are adviced:

Here is the full story including a refresh:

Note that this assumes that you've already made changes to the code, and committed them!