Choose from thousands of popular open source SVG icon packs and add them to your React projects easily with @meronex/icons.

Meronex icons is a react-icons fork, read here for credits and fork motivation. 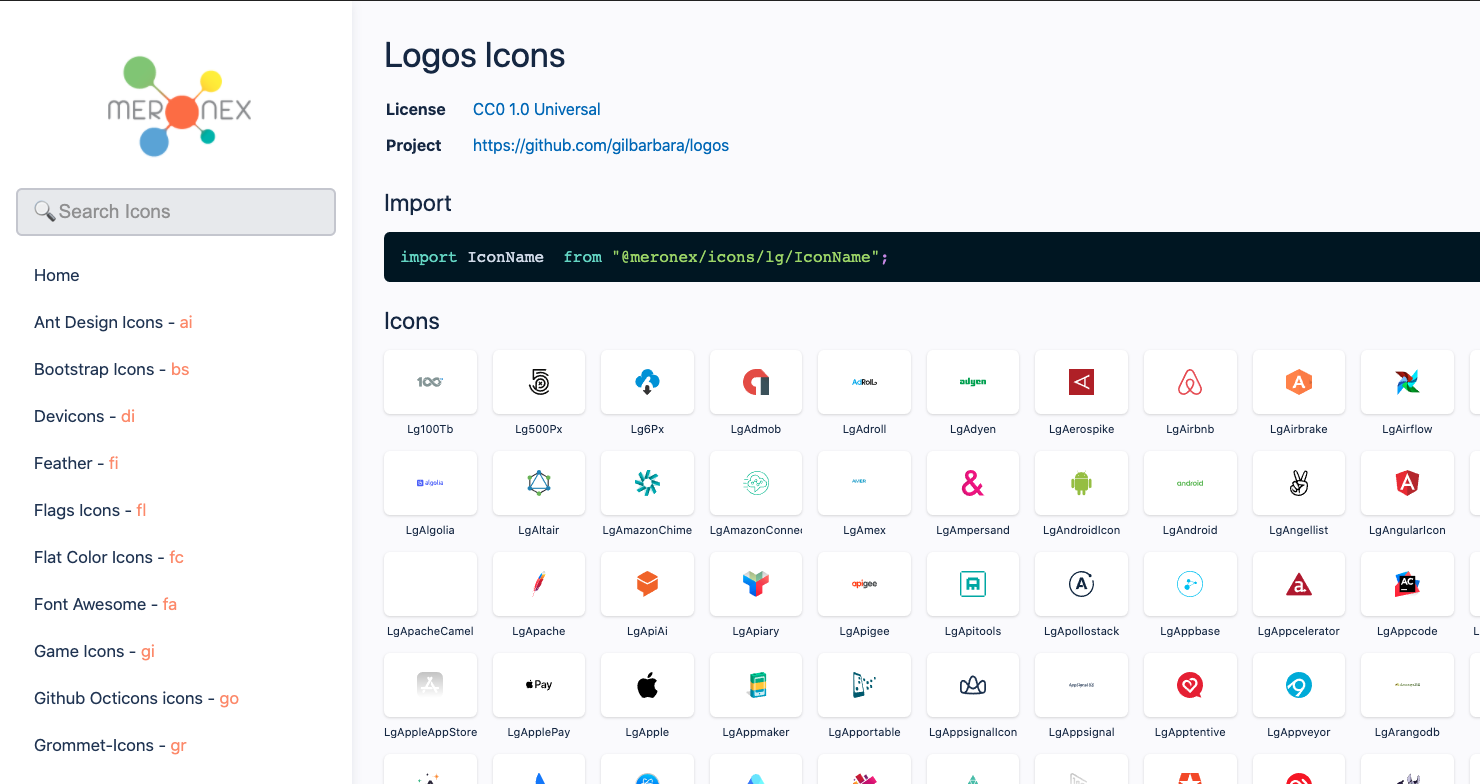 Default import (use if you don't have tree shaking)

Named import (use with tree shaking)

View the documentation for further usage examples and how to use icons from other packages. NOTE: each Icon package has it's own subfolder under @meronex/icons you import from.

For example, to use an icon from Material Design, your import would be: import ICON_NAME from '@meronex/icons/md/ICON_NAME';

From version 3, vertical-align: middle is not automatically given. Please use IconContext to specify className or specify an inline style.

Dependencies on @types/@meronex/icons can be deleted.

This project uses Conventional Commits format for the commit messages.

The preview site is the meronex-icons website, built in NextJS.

The demo is a Create React App boilerplate with react-icons added as a dependency for easy testing.

How to add an icon set

From the main directory (where this file is located) run the following command:

yarn start Add the name, URL, and the license link to the table in the ##Icons section of this file. Keep the list in alphabetical order.

Add the object with the following structure:

to the icons array.

4. Once everything builds and looks right in the preview, create a pull request

Why React SVG components instead of fonts?

SVG is supported by all major browsers. With react-icons, you can serve only the needed icons instead of one big font file to the users, helping you to recognize which icons are used in your project.

Credits and motivation for the fork

This is a fork of react-icons and was created specifically to resolve the bundling size issue #154, see here.

It was meant to be used temporary until the fix PR merged upstream however due to the lack of activity at the react-icons repo, I have decided to put publish it as it could perhaps save others the patching time and effort I had to go through.

Why did you change the logo/theme for the preview site?

As I said that was initially meant for internal consumption, the bundle issue was a show stopper for us, I've submitted a PR which is not merged yet and this issue has been open for two plus years. I don't have time/desire to redo the preview site, so I just shared what I have.

Feel free to fork edit and host else where if you need to as I did.

What else did you change?

Do you plan to keep maintaining it?

I'd rather have the changes merged upstream I don't prefer fragmented react community, however I plan to keep this maintained until react-icons regains momentum. My view on this that if you publish open source, then you've to be responsible for the longevity of it when others depend on it and willing to offer a hand, otherwise don't publish at all.