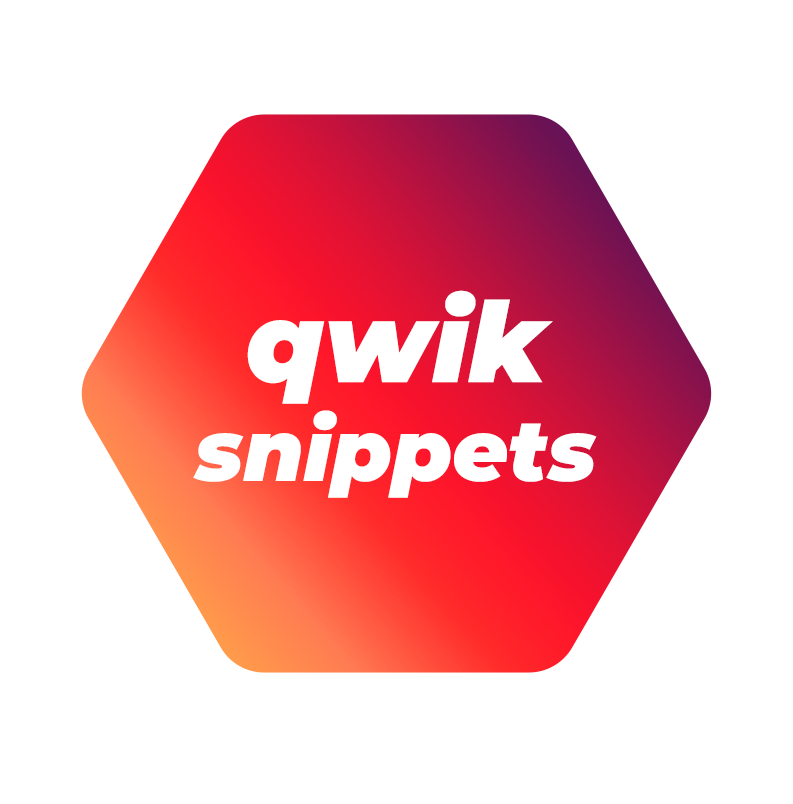 Language and Ecosystem Support for Qwik.

This extension for Visual Studio Code adds snippets for Qwik for TypeScript and MDX.

See the CHANGELOG for the latest changes

Type part of a snippet (e.g.: q-component), press enter, and the snippet unfolds.

Alternatively, press Ctrl+Space (Windows, Linux) or Cmd+Space (macOS) to activate snippets from within the editor.

Components are the building blocks of a Qwik application. Components are declared using component$() and at a minimum need to return a JSX Element.

A key feature of any framework is making it easy to listen to user events.

Qwik can listen on a variety of events by placing an on$ attribute on an element that subscribes to the corresponding browser event.

Composing functions would not be very useful if you couldn't pass in parameters. In the same way that functions have parameters, components have "props". A component uses props to pass data to its children components.

Reactivity is a key component of Qwik. Reactivity allows Qwik to track which components are subscribed to which state. This information enables Qwik to invalidate only the relevant component on state change, which minimizes the number of components that need to be re-rendered. Without reactivity, a state change would require re-rendering from the root component, which would force the whole component tree to be eagerly downloaded.

Use context to pass data to child components without explicitly passing it through components (known as prop drilling). Context is useful to share data that is needed throughout the application components. For example styling information, application state, or currently logged-in user.

When using lifecycle hooks, you must adhere to the following rules:

Styling is an important part of the design of a web application. Qwik is responsible for loading the style information when a component is mounted. Use useStyles$() to tell Qwik which style should be loaded.

Qwik's philosophy is to delay loading code for as long as possible. To do that, Qwik relies on Optimizer to re-arrange the code for lazy loading. The Optimizer is code level transformation that runs as part of the rollup. (Optimizer is written in Rust (and available as WASM) for instant performance)

The Optimizer looks for $ and applies a transformation that extracts the expression following the $ and turns it into a lazy-loadable and importable symbol.

The powerful, part of Optimizer is that you can create your own APIs with $ suffix.

Routing is a way to map public URLs for a site to specific components declared in your application.

Qwik City uses directory-based routing. This means that the structure of your routes directory drives the public-facing URLs that the user will see for your application. However, it differs slightly from traditional file-based routing, which we will discuss shortly.

The developer could extract all of these into <Header>, <Footer>, and <Menu> components and manually add them to each page component, but that is repetitive and error-prone. Instead, we can use layouts to automatically reuse common parts.

Each route has the ability to add HTTP request and response handlers, allowing for developers to retrieve and modify data. The handlers can also be used by endpoints, which only respond with data rather than a page's HTML.

This feature enables you to handle any request event, have side effects on the request pipeline, just before you render the component and respond with custom content. It is available to pages, layouts and endpoint routes, but not on regular components.

Page content can be created using Qwik components. The component representing the content should be exported as a default export.

The goal of Qwik's prefetching is not to prefetch the entire application, but to have already prefetched and cached what's possible at that time. When the Qwik optimizer breaks apart the application, it's able to understand possible user interactions. And from this, it's just as important that it's able to understand what's not possible from user interaction.

Static Site Generation, or commonly referred to as "SSG", is the process of pre-rendering site webpages into static HTML files. The benefit is that when a visitor requests the webpage, the response is a pre-generated HTML file (a static file), and doesn't require the webpage's HTML to "rebuild" on the visitors browser, or dynamically created by your server.

tag as the first element within (at the very top of the HTML content). The section is not something that your route component renders directly, yet you still need to control its content. This can be achieved by exporting a head property (or function) from your page component.

We love contributions! Check out our contributing docs to get more details into how to run this project, the examples, and more all locally.

Have an issue with using the snippets, or want to suggest new snippets to help make your development life better? Log an issue in our issues tab! You can also browse older issues and discussion threads there to see solutions that may have worked for common problems. Back to Topꜛ