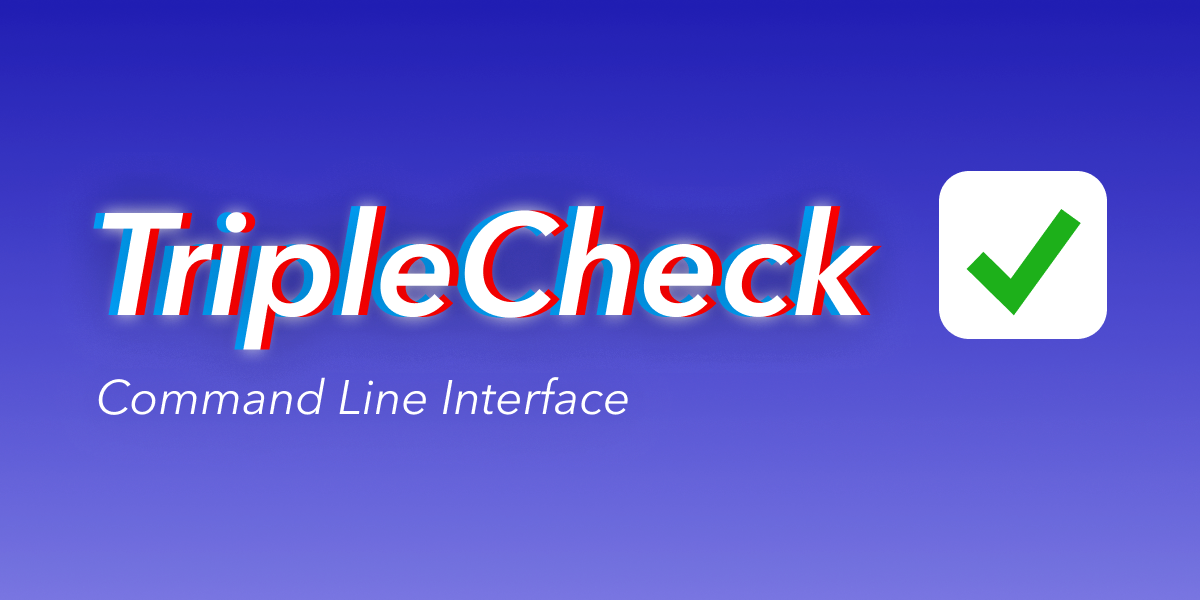 TripleCheck CLI — The easiest and fastest way to do contract testing.

In particular triplecheck-cli helps you with:

The three key features of the TripleCheck eco-system are: 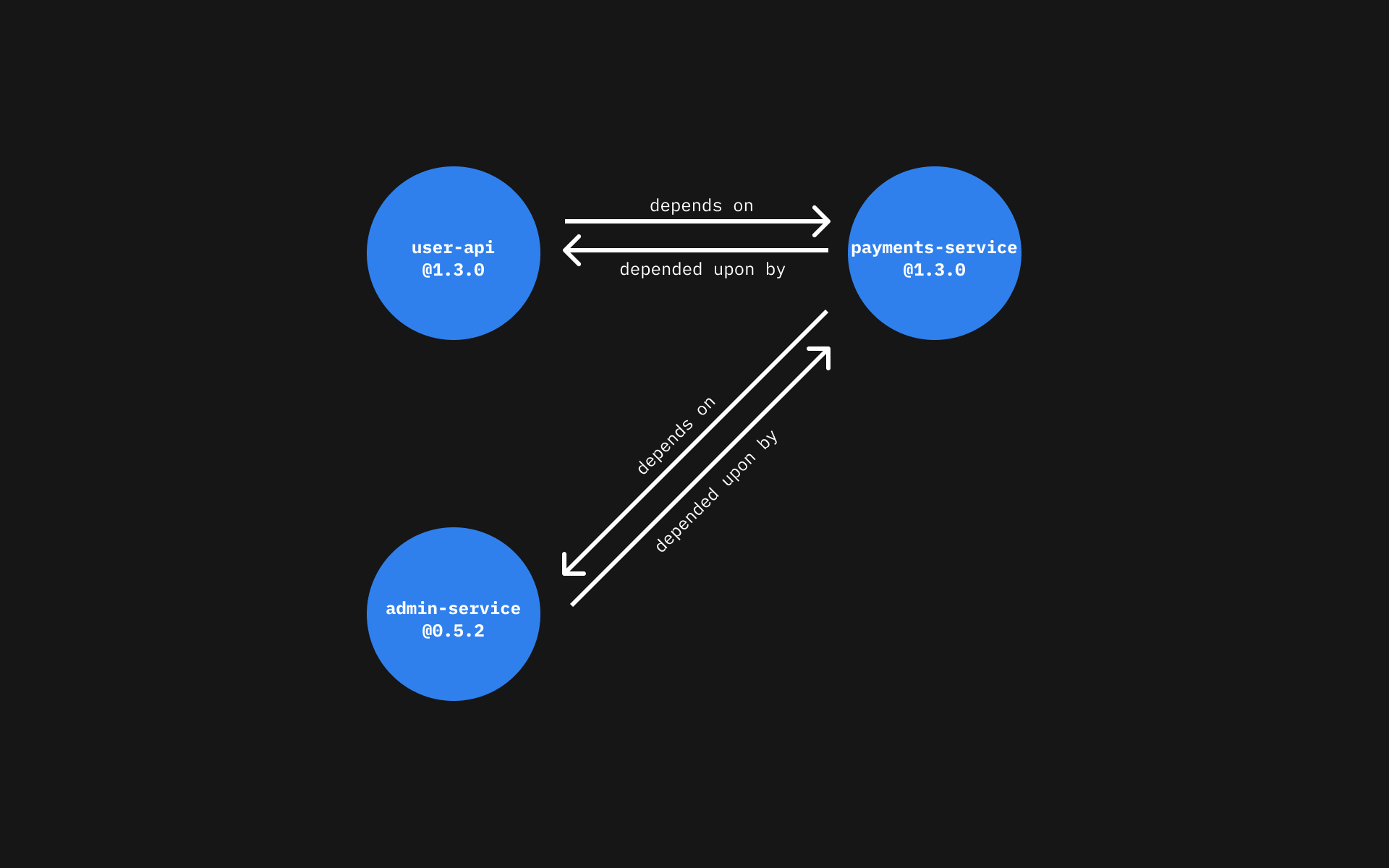 And how they would look like if you'd call the broker: 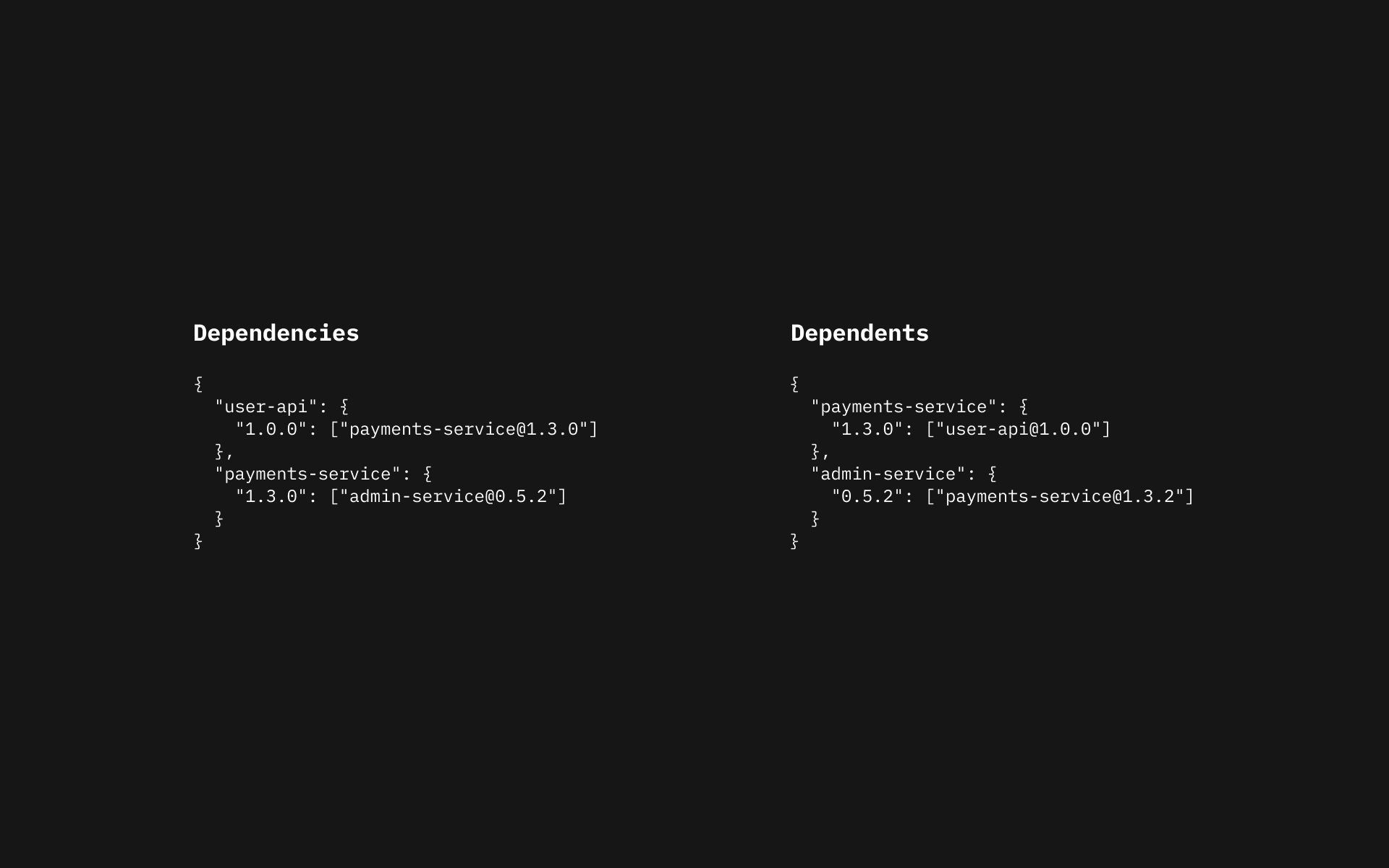 Certainly there can be services that have no dependencies or dependents, or any combination of those.

Compared to Pact, TripleCheck cannot make deep semantic asserts (like testing an expected response body), it can only ensure type and schema consistency. This is the true scope of contract testing. Tools like Pact are capable but, at least according to me, do too much. If you really want to know more than whether the contracts and tests are compatible, Pact will remain a better fit for you than TripleCheck.

You can do this manually according to the example below—or make it real simple and just run one of the following commands.

This is the configuration that TripleCheck will generate for you (with the identity fields changed, of course ):

Deploy a broker and point brokerEndpoint to it

Use one of the pre-baked brokers that correspond to your setup and deploy it. Point the config's resources.remote.brokerEndpoint to it.

Create a local contracts file and point contractsPath to it

Create a JSON file in your project folder. This should at least cover your own service. If you don't have any contracts for services you are dependent on in a broker yet, then ideally write those here as well. The format for a contract is:

Specify the file and path in the config's resources.local.contractsPath.

Create a local tests file and point testsPath to it

Create a JSON file in your project folder. If you don't have any tests for services you are dependent on in a broker yet, then ideally write those here as well. The format is:

Specify the file and path in the config's resources.local.testsPath.

Refer to the below type documentation for more details.

TripleCheck CLI allows you to run tests by verifying JSON Schemas and/or plain objects that represent contracts against test objects.

An example contract (plain object style) could be:

In our list of contracts, we've provided user-api with version 1.0.0 and the three fields that it expects. It doesn't matter who writes this contract, but it makes sense that the team/person writing the service handles this activity.

A basic test (again, a plain object) to verify schema integrity could look like:

To test the contract, we have constructed an array of tests for services and the versions of them that we want to test. An approach like this makes it easy to co-locate both contracts and tests in single respective files, or to assemble those files programmatically. If you use the TripleCheck broker this is actually one of the things it helps you do, by piecing together contracts and tests. When testing, you can use a combination of local and/or remote tests and contracts. The configuration lets you set this as needed.

Notice that the exact semantics are not validated (i.e. Carmen vs some other name), but instead the shape. If you remove a field, or make the age field a string, the test would fail. Under the hood TripleCheck uses Quicktype to do this checking. It's recommended to use JSON Schema for more complex usecases. It also makes it easier to be concrete about actual types and what fields are required.

Do I need to have a broker?

Why would I want a broker?

The broker acts as a central, global resource so you can publish contracts and tests, meaning you create discoverability of what services exist, what their relations are, and because of that allows richer testing facilities.

You also get the obvious benefit of storing contracts and tests somewhere that's not on your disk.

When does it make sense to skip the broker?

If you only want to do basic one-way testing (maybe lightweight integration testing), or anything where you are not concerned of a distributed network of functions and APIs calling each other. But then maybe contract testing just isn't something you should be too concerned about anyway?

What is the fastest way to get started with the broker?

There are several broker implementations that you can use right away or as the basis of your own starter kit. The current list is:

Read more at the respective links or over at triplecheck-broker for details on the broker.

Contracts should be "owned" by the respective services. The individual service is primarily responsible for creating, updating and publishing their contract.

Tests can be written by anyone who has a dependency toward a given service.

One contract per service

Each service should abide by one contract. This contract may have multiple versions.

One local test file and one local contracts file

Note: This recommendation stands, unless you only use remote data.

All tests are collected in a single file. Same goes for the contracts. These can, respectively, contain any number of services and versions.

Use the remote collections of tests and contracts

Make sure to publish collections to the remote data storage. Only keep locally the minimum number of things you need. For a typical provider it would be your own service (provider) contract and your tests.

Use tests.include in the configuration to decide what you actually need to test. You can match in several ways:

Dependent services will be tested by default

If a service X is dependent on you, those tests will be run automatically as well.

This can be skipped by setting tests.skipIncludingDependents to true.

How do I update or "unpublish" tests and/or contracts?

Any updates will replace the pre-existing data (being "idempotent").

Deleting tests/contracts is currently something you have to do manually by calling the broker API.

What about schemas for GraphQL services and APIs?

There's a few aspects to this. With GraphQL you do get pretty good validation and typing on the service level but not necessarily on the actual managed API.

At least I am inclined to think that if you are running a managed API (such as AWS/GCP API Gateway) you will want to have schema validation on it. If you already have that, and are running GraphQL, then that schema should be ready (or nearly ready) to use as a contract with TripleCheck—OpenAPI schemas are after all very similar to JSON Schema. This has worked fine for me with AWS API Gateway, for example.

If you want to convert a GraphQL schema you can use a package like graphql-2-json-schema. You may also want to take a look at my own API-oriented solution convert-gql-to-json that uses that same package. Frankly I've had mixed success, but feel free to try it and do a pull request if you can improve it (either the original base package or my API variant of it).

Add these these to your package.json scripts block:

Don't forget to change your-registry-name if you want to use the AWS option.

The merge-schemas command also requires your own values, so change that too if you are going to use it.

Note that the shell scripts are entirely separate from TripleCheck, and therefore won't take any options from your configuration file. Feel free to copy and modify these shell scripts if you want to extend them with more functionality.

Save the below content in an EventBridge schema named demo-schema:

The above when run with the AWS sync script will generate the following file generated-schemas-aws/demo-schema@1.0.0.contract.json:

Save the below content in a schema named sensor-data:

The above when run with the GCP sync script will generate the following file generated-schemas-gcp/sensor-data@1.0.0.contract.json:

After generating a contract from your cloud provider's schema service, it's time to put it into your local contracts file.

Given that you ran an AWS sync, that your schemas folder is generated-schemas-aws, and that your contracts are located at contracts.json, then running the full merge command would look like:

The generated output would simply be a merged JSON file. Now, if you were to run tests, then those contracts would start to be used (pending correct configuration and a set of tests for the services).