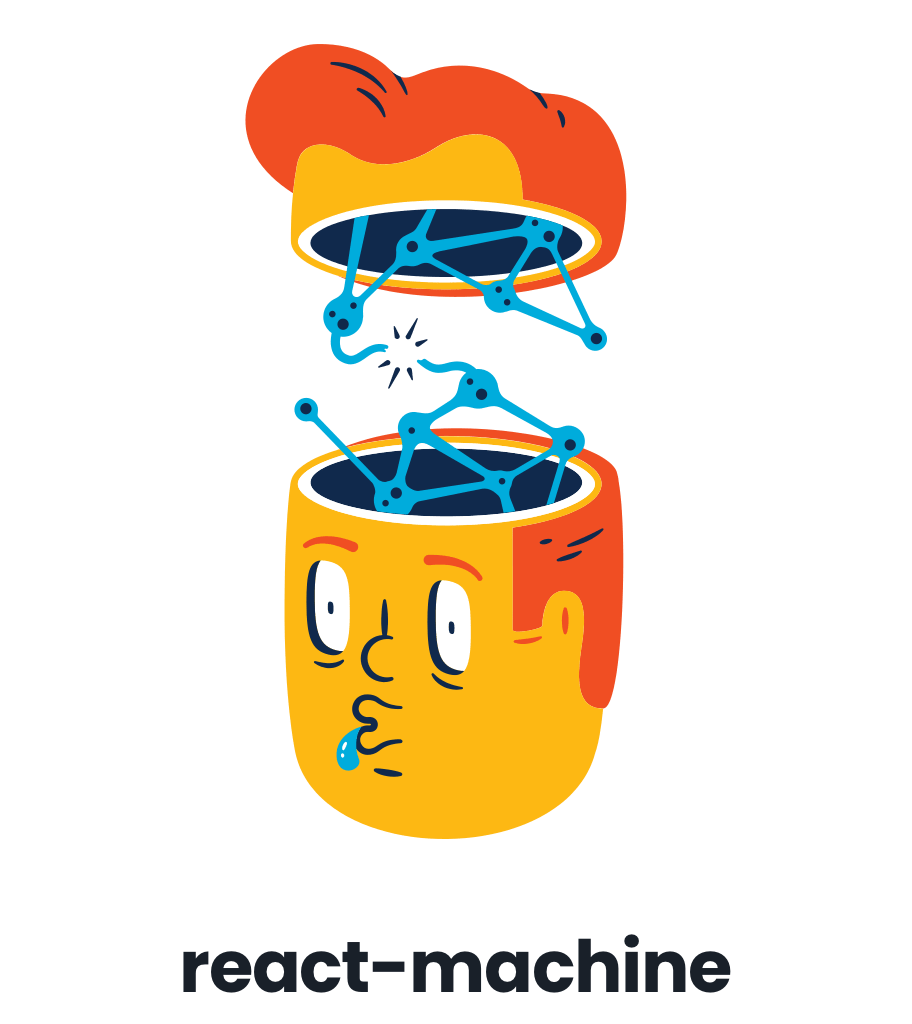 
When useState or useReducer is not enough, useMachine hook can be used to express more complex component state and business logic. Machines are especially useful for handling asynchronous effects in your components, for example, saving a form.

Robot is a great Finite State Machine library with integrations into React, Preact, Svelte and more. It has a neat succint API that inspired the API of react-machine and boasts a lightweight implementation. Here are some differences:

XState is the most powerful modern state chart / state machine implementation for JavaScript. It's rich in features and supports React and Vue out of the box. Here are some differences:

In summary, react-machine is an experiment in creating a lightweight and flexible solution for component level state management in React. The core machine logic is pure and stateless, which allows for delegating the state storage to useReducer and effect execution to useEffect, done so with concurrent mode compatibility in mind.

Machines are created using the API passed into machine description function, here's an exhaustive example showing all possible types of transitions and hooks:

When you invoke the useMachine hook it returns machine state, send, context and the constructed machine itself. Typically you'll use state, send and you could use context in case you're passing it down to other components.

State - state consists of name and data (state data). Name is the name of the current state node the machine is in. State data is any data that has been computed using reducers (and assigners) as part of transitioning between states.

Send - this is the main way you will transition machine from one state to another. Send can take the event name, or an event object with key type and arbitrary other keys as payload.

Context - context is passed as the second argument to useMachine and is not to be confused with machine state or machine state data. Context is a little bit like React component props. It's some immutable data that gets passed into every machine hook (such as guard, reduce or effect). Context provides the best way for your machine to utilise component props in machine's business logic. If context changes (or more specifically, any of value of the context object changes), an event of type assign and no payload will be sent into the machine, which will evaluate any guarded immediated transitions and any transitions listening to assign event. This is very useful if you want your machine to change states or update it's state data based on changing context. It is also efficient, since context changes that are not relevant to the current machine state will not trigger any re-renders.

Create and initialise the machine.

Declare a transition between states.

A special type of transition that does not leave the state and does not trigger any enter/exit hooks. Useful for performing effects or updating context without leaving the state. Note: this transition does re-evaluate all immediate transitions of the state.

Hooks to run when entering a state.

Hooks to run when leaving the state.

If the guard condition fails, the transition is skipped when matching against the event and selection proceeds to the next transition. Commonly used with immediate transitions, but works with any type of transition.

Updated context based on current context and the incoming event.

Return a partial context update object, that will be immutably assigned to the current context. A commonly useful shortcut for assigning event paylods to the context.

A way of handling side effects, async effects, subscriptions or activities. Once the state is entered, the effect gets started (in useEffect and only after finalising all of the immediate transitions) and can send any number of events. Note that context will be valid when initially running the effect, but will get stale afterwards. Also note that send will be ignored after the effect is cleaned up, and similarly send can not be used in the cleanup function of the effect.