A simple React component that can be used to display football league tables. It was written with small tables (i.e. 4 team World Cup groups) in mind, but you can use it for as many teams as you like.

If you want to include this component in your React app, install from npm with

Import wherever you want to use it with

This gives you a standard React component:

react-group-table has some mandatory props and some optional props.

The most important prop is an array of team objects. There can be as many teams as you want, but each can have the following properties (note some are mandatory): 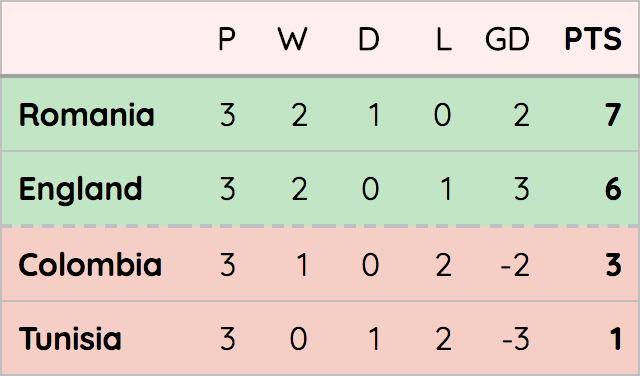 If you want to fork this repo and make changes or just clone it to play about with, it also comes with a 'Reduxified' test harness. Run

in your browser. Hot reloading is enabled so you can make changes on the fly. Although not used for this simple example (other than the initial state), there is a redux directory with an example reducer (test/tools/redux/group/increment.js). If you are familiar with Redux and wish to make use of this in development then you can simply add new actions (to test/tools/redux/group/actions.js) and new reducers. The component is rendered in test/tools/containers/Harness.js and test/tools/components/Harness.js.