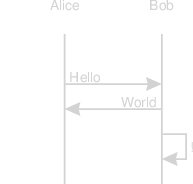 The following sections describe syntax that can be placed in a .wsd file for input to the quence processor.

# [comment] Place a comment on a line by itself, or at the end of any line. If you need a # in a string, enclose the string in double quotes (").

participant "[description]" as [name] Create a new participant in the order that the participant directive appears in the input file. The description is output, and the name is what is used for reference in later directives.

Arrows are draw between participants with open ends, closed ends, solid or dashed lines, and may be bi-directional.

The minimum message looks like participant arrow participant, but a full description is:

Draw a line with arrows between two participants. A participant that has not been previously mentioned will be automatically created. Note that a message may be of the form B -> B, which produces a self message.

A message can have a title that will be drawn over the message line. The title will be justified toward the start of the message, or in the middle for bi-directional messages.

Each message start time can have a timestamp associated with it by prefixing the messagewith label:. Subsequent messages can be declared to start or end at a given label by suffixing the participant name with @time, where time is the label from a previous message. This will usually result in a diagonal line.

Message options modify the message, and are of the form name [= value], with multiple options separated by a comma (,). The following message options may be set:

set [option] [value] set an option governing the production of the diagram to the given value. If the value is omitted, it defaults to true.

The following options may be set (followed by their defaults):

Quence was formerly known as "arrow", until I was asked very nicely to let another project use that name.