Envelop big blob of data into frames that can be displayed in series of QR Codes.

NB. this library is generic enough to not even be used with QR Codes but still take optimization decision in regard to how QR code works and from empirical tests.

for Web or Electron

The exporter only have 1 function to use: dataToFrames.

You can find an implementation example in examples/web-text-exporter.

There are a few functions you can use to be able to consume and accumulate the frames over time.

The main function is parseFramesReducer that you feed with each QR Code data and will accumulate a state. Consider that state a black box and prefer using the utility functions to extract out information.

You can find an implementation example in examples/rn-text-importer.

To find a good QRCode data size, we want to optimize the data we can put in each frame but we must not have a too big QR Code otherwise phones would have issues scanning it.

Empirical tests has shown that data size between 100-200 are the best and that after 200 threshold, the ability for phones starts to decline. A counter-intuitive result we have found is that QR Code with really few data in it (like below 50 bytes) are not easier to read than just 150 bytes and sometimes are even slower to read!

We have run an internal benchmark on various phones and get this result: 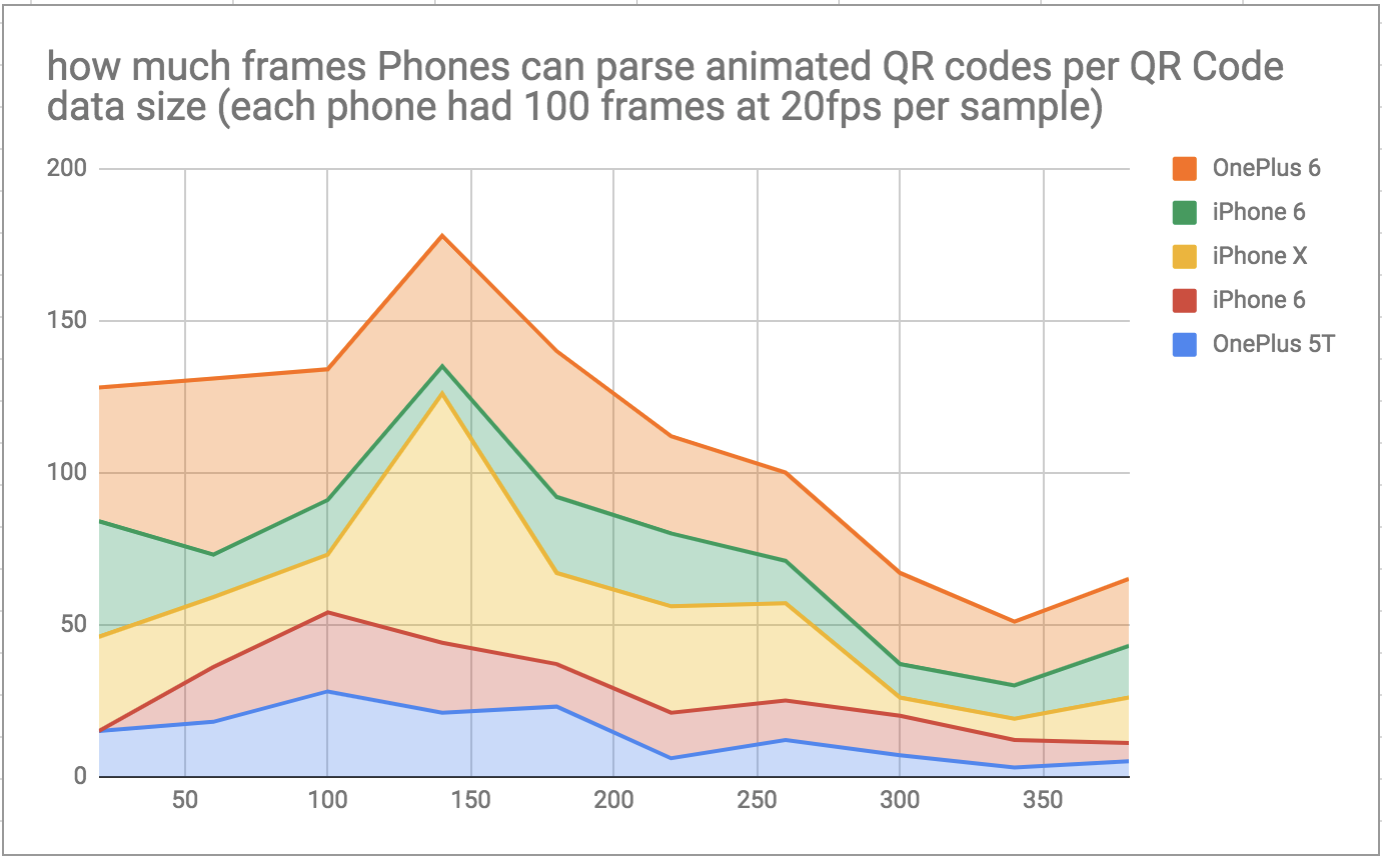 troubleshooting frames not getting caught

Since this is an unidirectional data stream, we can't tell the emitter to slow down or inform it what are the missing frames. Therefore, the emitter can just loop over all the frames until they are all parsed.

To troubleshoot this, you can try different FPS speed. Experience have shown phones are able to scan about 30 frames per second (depends on implementations) but in practice it's better to be at max 5 fps.

We also have empirically found that some frames are randomly harder for phone to catch. Therefore, we have in this library a concept of "replicas" which basically replicates frames with a nonce: one byte in the QR Code data completely change the qrcode, increasing our chance of falling on an "easy" frame.

base64 on each frame

Even though we can technically put binary data in QR Code, some reader implementation does not support this properly (for instance on iOS unless relying on undocumented hack https://stackoverflow.com/questions/32429480/read-binary-qr-code-with-avfoundation ). We have therefore chosen to convert frames to base64 (because built in Buffer). The overhead is acceptable.

On top of QRCode built-in checksums, we have a data length check and md5 checksum validation over the data to make sure some frame are not corrupted. The library is also able to recover from any possible frame corruption state (if you continue scanning, it should eventually correct).

To encode complex objects like JavaScript objects over the data, you can just use JSON.stringify. Since the result of JSON.stringify is not really optimized, you can then compress it using any compression algorithm like GZIP or node-lzw (my preferred because concise).