A Node Red node for setting global and flow context properties at startup and during runtime. 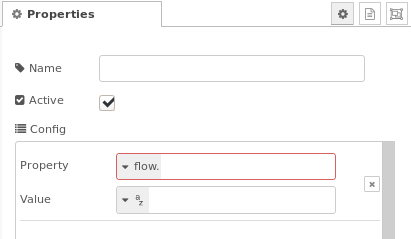 Configuration of Property and Value

If Active is checked (i.e. node is active), the configuration properties will be applied at startup before any flows are started. This may e.g. be used for initialization purposes.

If the node receives any msg, it will apply the configuration properties contained in that config node. I.e. the value of the Value field is written into the variable given in the Property field. The received msg is discarded.
This allows e.g. to alter configurations programmatically.

Pressing the button on the left side of the node will also apply the configuration properties contained in that config node.
This allows also to alter configurations manually.

The config node has no output data.

Remark: Example flows are present in the examples subdirectory. In Node-RED they can be imported via the import function and then selecting Examples in the vertical tab menue.

The example flow shows an example where the global variable PC_Stability

The lower nodes only show the contents of the modified global variable.

The following figure shows the node configuration of the upper confignode. 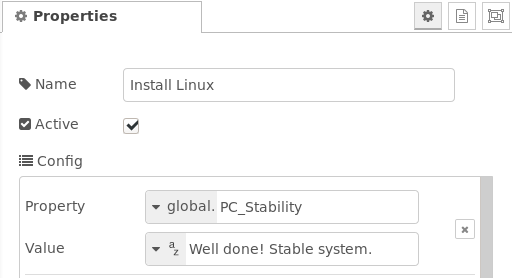