the easy way to mock a neo4j-driver session.

I couldn't find any other straightforward way to mock the neo4j driver during unit tests. It needs to be super fast and simple to work with CI and TDD.

A mock session generator for neo4j. You set up a mock neo4j session by specifying an array of query spec objects. Each query spec object contains a query string, param set, and expected response.

You can then pass in your mock session as a parameter to a function to test instead of a real session. It works for both running queries directly (session.run(...)) and transactions (session.readTransaction() and session.writeTransaction()). You also can generate a mock driver, build your server using it rather than the real driver, and mock all of the queries in the server.

There is also a function to test a query set against the live database, not intended for unit tests. That way, whenever you change your database you can confirm that the queries in your mock session are all still working!

Include the package in dev:

To mock a query, simply:

You can pass your mock session into code that requires a session.

An alternative is dataToStored, which takes as input an array of objects containing record values. That can be useful if you know what data you want, and did not copy the Results from the data browser or from a console.log statement.

The actual responses to queries differ from the stored ones in that the response include object class instances rather than simple jsons. In addition, what gets returned from GraphQL shows pure data, which differs in some ways from even the stored format for queries.

Therefore, it is important to understand that when you want to deep-compare a query result to a stored expected result you must convert one of them to be in the same format as the other. Also, you may want to store a pure data representation of a query and to compare it with actual results. Therefore, neo-forgery maintains three formats for query results, and provides conversion functions among them: 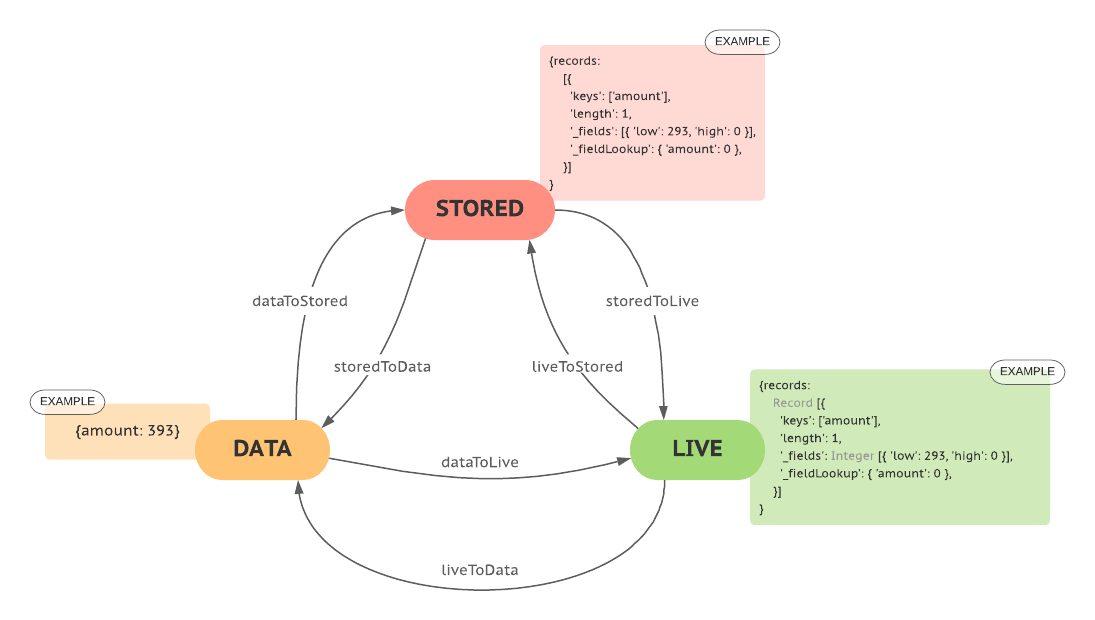 To convert from format A to B from the list of 3 above, you call AToB, e.g. using AVA you might have this:

A Note About Integers

neo4j supports a greater range of integers than Javascript. Therefore, the neo4j-driver documentation explains that the driver query results do not return a simple number, because then data would potentially be lost. Instead, the driver returns a special object with low and high stored for the number. The neo-forgery conversions support that. But your mock results must not use integers that exceed the safe range for Javascript. That allows you anything between -(2^53 - 1) and (2^53 - 1). In the unlikely event that real data has larger numbers, you may have to reduce them in your stored mock results.

In addition, neo-forgery assumes that data with the following format represents an integer:

In the extraordinarily unlikely event that you have an object in your data that just happens to match that expression, the liveToData and storedToData functions will wrongly convert it to the integer value for low.

There are two functions for generating mock output. These can be used for confirming that output is what you expect it to be.

The main function for generating a mock session is:

You pass in a QuerySet and an instance of a neo4j Session is returned.

But, if you need more precision, or if for whatever reason you want to create your own custom mock session, you can use this:

Pass in a Function and a session is generated.

The sessionRunMock function should have as parameters (query: string, params: any), and should normally return mock results. You can use the result conversion functions dataToLive and storedToLive for the returned values. You can also vary the output from the function based upon the query and params received.

In theory, you could create a session which emulates your entire database for all of the queries in your tests, and simply reuse the mock session in all of your tests. Note that you can also throw errors if you are testing for them.

There are cases where you will have to generate a mock driver. The most typical use case is for mocking an Apollo Server that uses the @neo4j/graphql library.

The following function can be used:

You can insert your driver into a context used with ApolloServer, e.g.:

Then you can include calls inside of your session.

Note: when you use @cypher directives, the @neo4j/graphql library will augment your query text as well as your parameters. So the first time the query will probably fail. But neo-forgery automatically tells you clearly how you need to change both the queries and the parameters to be able to match. So you can just copy the proper values and replace your own.

Another usage of your driver is overriding driver in code that uses one. You can use proxyquire or whatever tool you'd like to stub out the definition of driver in your code and replace it with mockDriver.

As detailed above, here are the functions for converting results to different formats:

Note that there is metadata in a LiveResonse, which has the key summary. The metadata is lost if you call storedToData or liveToData.

It simply generates the proper stored format for a response, using the records("Response") and optional metadata("Summary") copied from the CODE options:

Usually, you probably won't need the summary. But, if you happen to need a stat such as nodesDeleted you can copy the summary as well.

Here's a sample usage when all you need is the records:

Here's an example of a needed summary usage (say you deleted nodes, so you have no resulting records returned):

If you like, you can make the database info for a driver the real info for your database. Doing so will not affect the performance of the mock driver, but the data in the driver instance will show the real database info.

You can insert the information that you need. Usually you won't need it.

Here's an example usage based upon an .env file:

Verification of Your Mock Query Results

One last function is

See Checking the Validity of Your Mocked Queries below.

There are some interfaces that you can import into your TypeScript project.

You must use a DatabaseInfo type for specifying the database that you want to use for running testQuerySet.

The output from a query is specified via a MockOutput instance:

Normally, you won't need to worry about the details for that. You can just capture the output in the ways specified above.

A query set is an instance of QuerySpec[]:

Checking the Validity of Your Mocked Queries

The neo-forgery package is build based on the premise that unit tests must be fast. By removing the need to query an actual database, you get instant results. But what if your database changes and the queries no longer work?

To solve that problem, neo-forgery exports a function:

You can pass in your set of queries along with the information needed for a database, and you can check whether the queries work for the given database. If any of them fail to return what you specify as output, and error is returned.

This function is not intended for unit tests! The whole point of neo-forgery is to remove the need to query an actual database when you run your unit tests. Rather, consider creating a separate test that you call regularly, perhaps as part of a regression test or after you change your database.

NOTE Currently, testQuerySet() currently checks only records in query results, and only makes an exact match. For instance, it will throw an error even the your output for a query is a subset of the data returned. That is a problem if you want to create small sample outputs for testing purposes. A future version of neo-forgery may remove that limitation by allowing you to specify a type of comparison for a query.

Some limits to neo-forgery are intentional. There's no testing of data updates, because it should not be relevant to unit tests. You are not testing the database server, or even the queries themselves. A query is just a string from the standpoint of your unit, and your unit tests should assume that the response is predictable and unchanging. An end to end test can confirm that independently. The most that you might need from the standpoint of unit testing is to confirm that a write query was executed, which you can do with a sinon spy.

But neo-forgery is new, and there still are things that it should be able to do that have not yet been implemented.

A great way to start is with the tutorials.

Special thanks goes to some people at neo4j for helping me with this.

First and foremost to Antonio Barcélos on the neo4j-driver team for the working solution for mocking a transaction.

Thanks also to Darrell Warde and Dan Starns on the @neo4j/graphql team for some very helpful advice.