The purpose of this repository is to provide reusable components for the ManageIQ project. These are not general purpose components, but specific to ManageIQ, however, reusable across all of ManageIQ (providers). The intention is to provide components that are reusable in various ways. Many of these components are 'Smart Components' that know how to communicate to backend endpoints(data-driven by provider) and retrieve relevant data for the component's configuration.

As we achieve greater reuse, the idea is to move more and more components to this repository. Creating a repository for smart reusable components (specific to a domain) across providers. 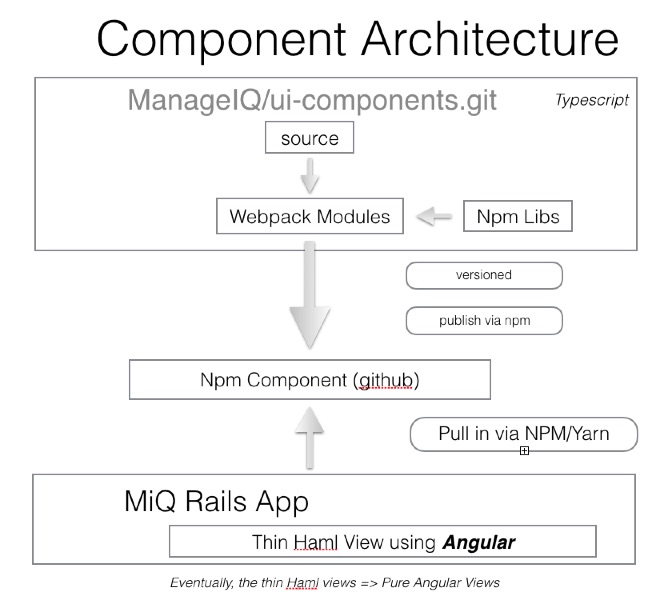 We are recommending Angular 1.5 Components instead of Angular Directives for better compatibility and easier upgrade to Angular 2.0.

You need to have installed Node.js >= 6 and npm >= 3 on your system. It is recommended to use a node version manager such as n. If you have node installed then it is just yarn global add n and then n lts to use the latest LTS version of node (see the doces for switching versions).

Install these node packages globally in the system

After yarn is installed, it is pretty much a replacement for npm, with faster, more dependable builds but still utilizing the npm packages.

Create library dependencies (run this every time you make any changes to vendor.ts) - no need to worry about any TS errors. Also, if you are pushing some changes please run this command so you will push minifed version of JS and CSS.

Before submitting code, run the following command to format the code according to the tslint rules:

This formats the code according to the tslint rules.

If you want to see documentation for each component, controller, filter, etc. run

This will generate docs from JS docs and after running yarn start this documentation will be available on localhost:4000/docs