Data transmission over sound waves written in JavaScriptTypeScript without any dependencies. All you need is just microphone, speakers and the browser!

Audio Network library is a hobby project in which the goal was to create simple network stack that uses sound waves to transmit data. Initialy it was using PSK modulation technique which was later changed into FSK.

Brief introduction to the topic is available as presentation hosted on slides.com here.

If you are interested in details you can read more in polish Programista magazine:

Part 3 of the article was the last one. It means that more focus will go to this website and Audio Network releases. If you can't wait please go trought some of the examples:

Note: some of the modules are not yet in main NPM package. Please verify roadmap.

Deprecated Phase-Shift Keying approach (last update at v1.1.0, will be removed at v2.0.0)

Initial versions of this lib were based on Phase-Shift Keying modulation technique. Unfortunatelly after some tests in turned out that this implementation was not working reliable on mobile devices. Starting from v1.2.0 this part of the lib will be marked as deprecated.

!!! IMPORTANT NOTE !!! - Everything described below (up to Licence) might be outdated or not working properly. Project is now in a phase of big technical changes. Entire v1.x was created mostly to learn DSP and share this knowledge in the 'Programista' magazine articles. Version 2.x will have more stable and simpler API and will be better consumable as npm package.

If you want to try AudioNetwork by yourself I would recommend to first open Demo - simple because Demo - full features might be little scary for the first time. You can also watch YouTube video that shows how to transmit data over sound between two laptops: 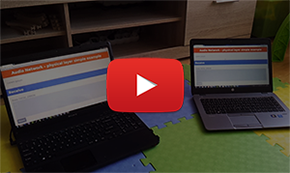 How can I transmit something over sound?

First of all you need to have two devices. One for sending, one for receiving data. It should work with any device (PC, Mac, tablet, smartphone) with browser that supports Web Audio API. Next you need to open Demo - simple at both devices and follow steps below:

By default PSK-2 modulation is used so you can use only symbols 0 and 1 but it's enough to send data bit by bit. For example to send ASCII a character (0x61) you need to put inside textarea 0 1 1 0 0 0 0 1. Please remember to always put one space between each symbol but whole text needs to be without trailing and leading spaces.

If at any point you will see FATAL_ERROR state you need to click on RESET button and start all points again.

AudioNetwork needs raw microphone output without any filter applied. You can verify that by opening Sound settings in your operating system. When you enter your microphone properties you might need to un-check all filters. The worst scenario is when your microphone has some hardware filter that you can't disable. In this case you need to throw it away and buy a new one ;)

How to add sound transmission to my project?

Audio Network is available at GitHub and npm so you can just run one of the commands below:

In both cases at build directory you will find minified and unminified js file with whole library. Pick one and include it into your HTML file. For example:

Now you can access AudioNetwork object at global JavaScript scope. It's the entry point for all components:

Below you can find Demo - simple source code:

To work properly Web Audio API requires running your HTML file via web server (http://localhost...) like Apache or some Node stuff like gulp-webserver (I'm using it and it works great). In case of local machine normal http connection would work. Unfortunately when you will want to go live you have to provide https. It's because in some browsers accessing microphone is not allowed when site is not hosted over https. You can read more about this here

Full feature demo is growing with AudioNetwork library core. It's developer sandbox for all new features.

Demo is divided into two sections - Receive and Transmit (blue bar with white text). You can show or hide stuff by clicking on View type buttons at Initialize section.

At Receive section you can also check current status of ReceiveAdapter.

The most important thing in this adapter is its state. You can find it at the top of the orange box (capital letters text like IDLE_INIT, FIRST_SYNC_WAIT, etc). Other important area to look is output of RX adapter - PACKETS. Here you can find any potential packet that will be found in the air. I wrote potential because integrity of incoming packets is not verified so some of them might be corrupted. It's because it's not PhysicalLayer responsibility to deal with it. In some future release of AudioNetwork packet verification will be added. This would be in next layer in the network stack - DataLinkLayer (like in OSI model).

Orange box is kind of developer debug box - it will be replaced to some nicer UX in the future...

At Transmit section there is not that much as at Receive section. You will find there only few buttons to send SYNC signal, PACKET and individual symbols (0, 1, ...). Number of unique symbols is determined by PSK symbol size (you need to switch view type to Complex to see that). At Packet textarea please remember to always put one space between each symbol but whole text needs to be without trailing and leading spaces.

Few more words about the project

Internally AudioNetwork library uses Web Audio API for retrieving audio data from the microphone and sending audio data to the speakers. To be more precise it is using ScriptProcessorNode. ScriptProcessorNode fires event when new portion of samples arrives (from mic) or new portion of samples is required (for speakers). Basically AudioNetwork library is analysing/providing raw arrays of sound samples inside audio events handlers. In other words all DSP is performed by internal AudioNetwork's classes or services written in pure JavaScript.

Apart from ScriptProcessorNode two other Web Audio API nodes were used. First was GainNode for connecting other nodes together and the second was AnalyserNode. AnalyserNode was used only to show some 'nice' visual stuff to the user. We can switch between time domain (to see raw samples) and frequency domain (spectrum analyzer like on FM radio display). It's optional and not required when we want to just send or receive data.

If somebody is familiar with Web Audio API one question may now come - why I didn't use OscillatorNode for sound generation or AnalyzerNode's FrequencyData output for detecting carrier frequencies? Well... I could, but the main goal for this project was to use PSK (Phase Shift Keying) modulation to send/receive data and learn a bit about modern wireless communication techniques. Those two goals even forced me to write everything from scratch because AnalyserNode's frequency domain data output (it is using FFT - Fast Fourier Transform) provides only amplitude information without any phase information. It turned out that the only way to achieve PSK modulation was to implement own Discrete Fourier Transform with amplitude/phase or use some DSP library. I wanted to dig into the details so I picked the first option :) Wikipedia about DFT looks ultra scary but in the code there is no rocket science. Basic implementation of Discrete Fourier Transform is very simple. We will not find there any mathematical tricks like used in FFT. If you don't believe me, check this class CarrierRecovery.

There's no rose without a thorn... CarrierRecovery class code is simple but when we would like to create more of its instances, to have more carrier frequencies, we will reduce overall performance pretty fast. It is not good but at least it's closer to KISS design principle ;)