JavaScript developers can now just open a .ts file and start hacking away like they are used to. No grunt no Visual Studio. Just pure coding.

Additional Notes: Some packages we love.

Featured on the TypeScript home page under tools http://www.typescriptlang.org/ and demoed by Anders Hejlsberg.

"I was shocked at how good it felt to poke around on the compiler with it." Jonathan Turner
"And guess what, it worked perfectly. Like everything else! Faster than Visual Studio!" Daniel Earwicker
"It's a thing of beauty - they had me at 'Type information on hover'. Discovering tsconfig.json support as well was just an enormous bonus." John Reilly
"This may be your best option for editing TypeScript at the moment - very nice!" Rasmus Schultz

Internally using AutoComplete+. Just start typing and hints will show up. Or you can explicitly trigger it using ctrl+space or cmd+space. Press tab to make a selection.

TypeScript files will be compiled on save. Different notifications are given if emit was successful or not. Configuration driven by tsconfig.json

Supported via tsconfig.json (read more) which is going to be the defacto Project file format for the next versions of TypeScript.

It also supports filesGlob which will expand files for you based on minmatch|glob|regex (similar to grunt).

Shortcut: F6. If there are any errors they are shown as well.

Shortcut : ctrl+alt+l or cmd+alt+l. Will format just the selection if you have something selected otherwise it will format the entire file.

Shortcut : F12. Will open the first declaration of the said item for now. (Note: some people call it Go to Definition)

ctrl+/ or cmd+/. Does a block comment / uncomment of code.

Go to Next / Go to Previous

f8 and shift+f8 respectively. This will go to next/previous errors in open files OR build error OR references based on which tab you have selected.

Integrates with atom's symbols view (ctrl+r or cmd+r) to provide you with a list of searchable symbols in the current file.

Also called Go To Type in other IDEs. Integrates with atom's project level symbols (ctrl+shift+r or cmd+shift+r) to provide you with a list of searchable symbols in the entire typescript project.

f2 to initiate rename. enter to commit and esc to cancel.

We are actively adding quick fixes so go here for an up to date list.

We will validate it and help you to fix it :)

Relative paths have traditionally been a pain, not anymore. Use import or ref and press tab to trigger snippet.

Note that within the path string you get autocomplete (ctrl+space/cmd+space) for all the files in the project by filename (works for both ref and import).

ctrl+shift+m to toggle the output compiled JS file for a give TypeScript file. The keyboard shortcut is consistent with atom's markdown preview.

Command : Typescript: Dependency View. A dependency viewer for insight into the project. You can zoom, pan, drag points around and hover over nodes. (more details) 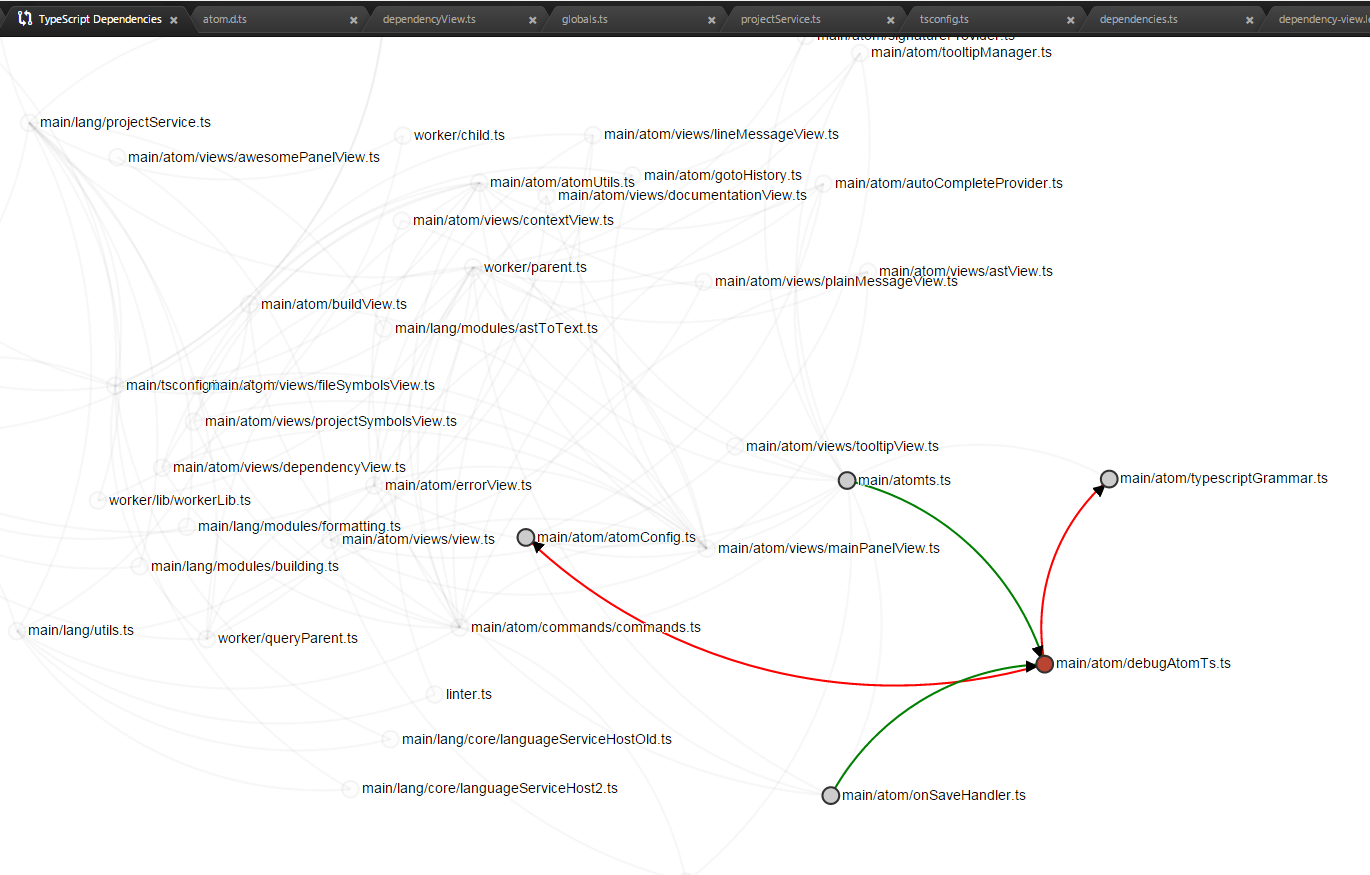 We try to keep as much of the stuff in sync while you edit code. However in dire circumstances:

Look at CONTRIBUTING.md for curiosity. We work hard to keep the code as approachable as possible and are highly keen on helping you help us.