Easily test your integrations with deBridge. A plugin for Hardhat provides the toolkit to test and emulate dApps built on top of deBridge protocol. 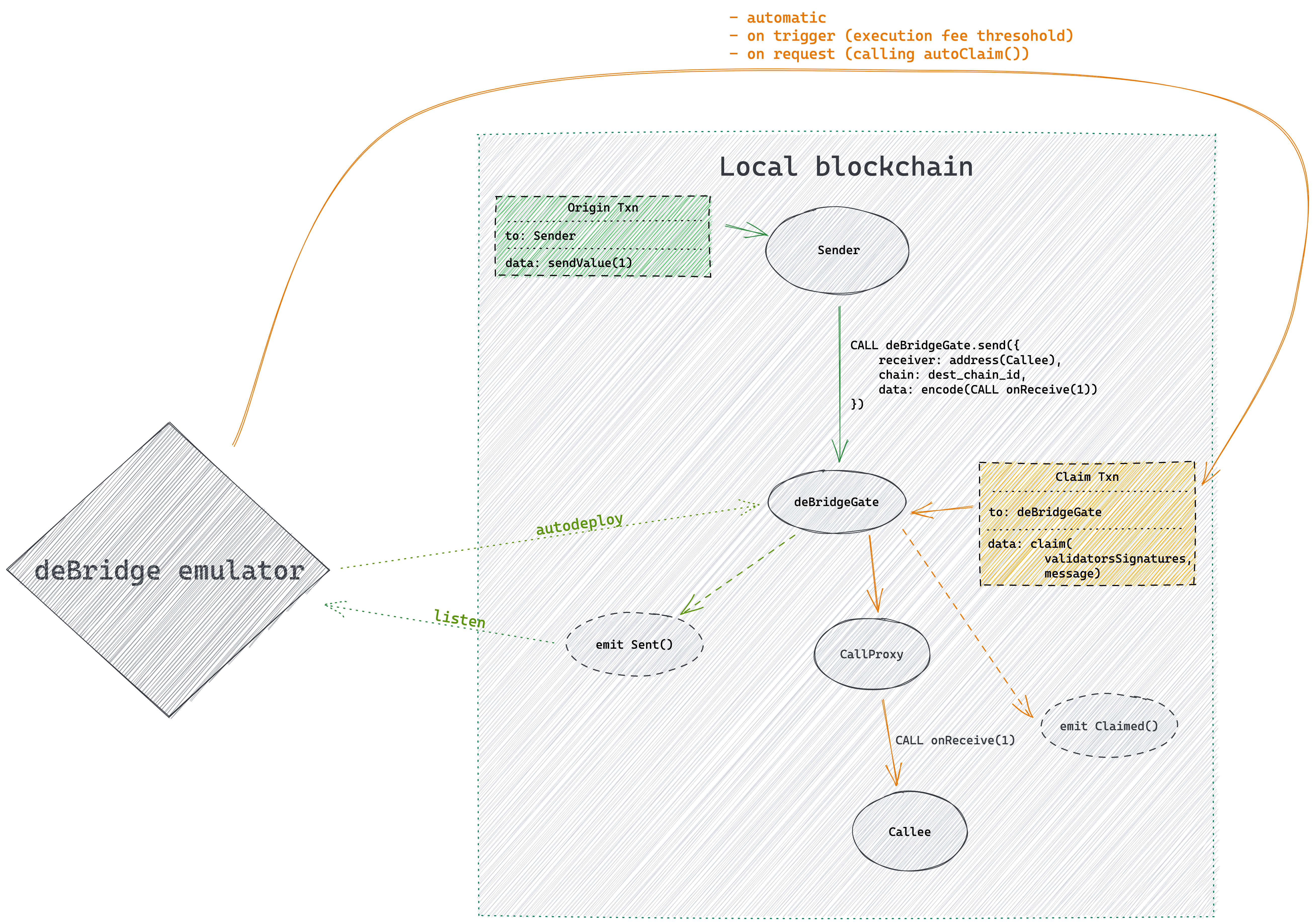 deBridge is a generic messaging and cross-chain interoperability protocol that enables decentralized transfers of arbitrary data and assets between various blockchains. Given the complexity of the protocol itself and the number of different components involved in the flow, integration development and its sufficient unit testing may by very tricky as it typically requires a complete infrastructure setup.

hardhat-debridge provides the toolkit for creating lightweight and blazing-fast emulation environment on top of hardhat network, behaving close to how the mainnet setup of the deBridge infrastructure does.

In a nutshell, this plugin is suitable to validate cross-chain interactions as follows:

Import the plugin in your hardhat.config.ts:

Consider looking into debridge-finance/debridge-cross-chain-dapp-example repo representing a complete example of a fictional cross-chain dApp which leverages the deBridge protocol to send calls between its contracts across chains. Under the hood, that example if excessively covered with simple units tests made possible with the help of this hardhat-debridge plugin.

After this plugin is being installed, import deBridge object into your test file:

Use deBridge.emulation.deployGate() to deploy the deBridgeGate emulation contract to the current hardhat network; then you can point your contracts (that are responsible for invoking deBridgeGate contract to pass messages to other chains) to this deployed contract.

Use deBridge.emulation.autoClaim() to invoke the emulation of the bridging process: this will construct the claim txn (intended to be broadcasted to the destination chain) and execute it immediately.

hardhat-debridge plugin comes with the emulator, which deploys the loopback bridge to the currently running node and starts bridging messages coming to bridge back to the same chain.

To create your local test bench:

Start calling your sender contract: you'll see transactions being printed in the first terminal while messages coming to the deBridgeGate contract being captured and bridged back in the second terminal.

The emulator itself is based on vanilla contracts that implement the core deBridge protocol, introducing some handy automation for it under the hood. This means that you can use the emulator along with the deBridge SDK and send and track submissions and claims explicitly when necessary.

The only thing to remember is to pass the corresponding context where the emulator is being deployed.

Consider looking into how this feature is used by the test cases for the debridge-hardhat itself, or inspect the following example:

Welcome to the #developers-chat at the deBridge Discord server.