This library contains components used by the CockroachDB Console and CockroachCloud Console to display cluster-level information.

Overview of how this package interacts with CRDB and CockroachCloud

The diagram below describes how this package is published and imported in the two application codebases it's used in: 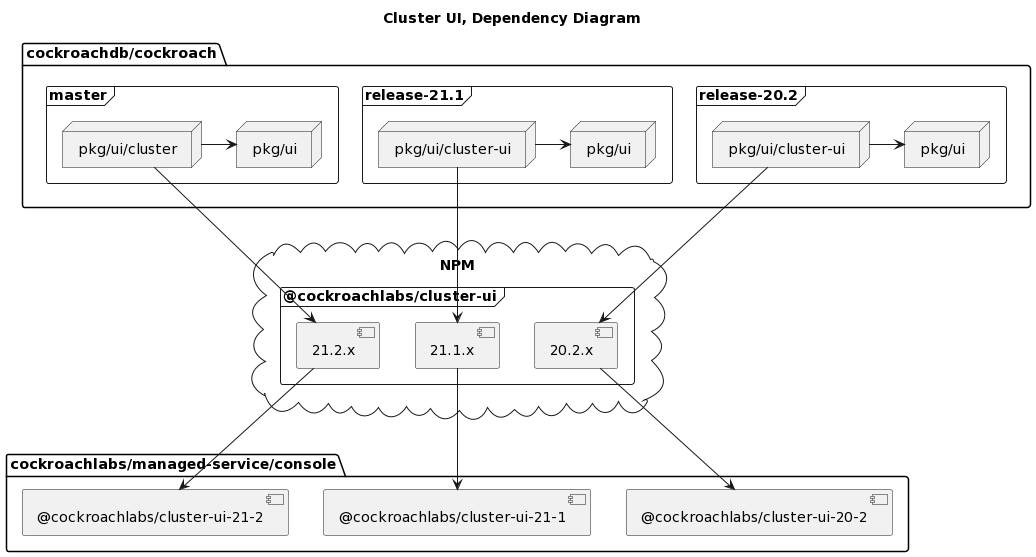 To look one level of abstraction below the diagram above, the components used in CockroachCloud and CRDB from this package differ due to the way that the component state management code integrates with the different applications. In CRDB, we import the React page component and connect it to existing Redux code that manages state whereas in CockroachCloud, we import a "Connected component" which is already coupled to the Redux code that retrieves and manages its data. In CockroachCloud we link the cluster-ui redux store to the global app store which lets our Connected component store and retrieve data. 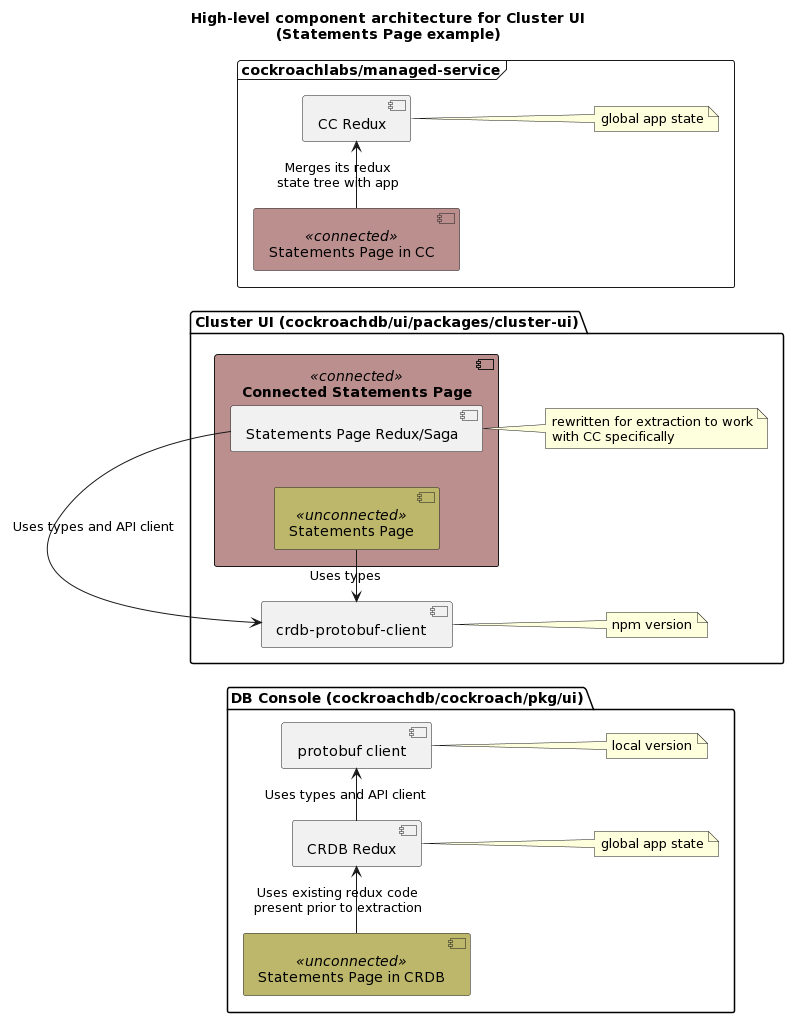 cluster-ui is dependent on the API of CRDB through a dependency on protobuf clients. Since the API can change in incompatible ways between major versions of the database, versions of cluster-ui are published following the version scheme of CockroachDB.

Note, that the patch versions of the CRDB version and the Cluster UI version will not align. The versioning schemes between CRDB and Cluster UI may vary slightly, but the goal is to provide guidance about compatibility.

The build processes for Cluster UI have been integrated into the make commands for /pkg/ui. The intention is that the development workflow between DB Console and Cluster UI components be seamless. If you would like to build cluster-ui independently, you can run the following commands,

In CockroachCloud Console, we install multiple aliased versions of cluster-ui. This, in addition to certain peer dependencies, prevent us from using a traditional yarn link for local development of cluster-ui. Instead, you must pack the dependency and install it from a local tarball. To view a local change to cluster-ui in CockroachCloud,

And then install the package in managed-service repo:

Test your changes by running CockroachCloud locally, but please be careful to not commit the changes to package.json or to yarn.lock

You can run storybook for this project using:

And opening http://localhost:6006/ in your browser.

The use of storybook in this project is to provide a controlled environment where components can be rendered or showcased for testing and sharing purposes outside of the entire DB Console or CockroachCloud app.

Often we build a component that behaves or looks differently in different scenarios with different inputs. Storybook lets us render the component in all the "interesting configurations" we define so that we can quickly get visual feedback on our work and ensure that we're not breaking functionality when editing code. Otherwise we waste lots of time getting our app in the "right state" to try and see if some random feature works or not.

Components and page developers are encouraged to use Storybook to showcase components and pages in many common states to be able to quickly review their work visually and to aid others in understanding what the various states pages and components we want to support.

Storybook stories should use the CSF format as described here: https://storybook.js.org/docs/react/api/csf in order to facilitate writing unit tests with the storybook components.

1. Change the version in package.json

CockroachDB uses a form of calver versioning where the major part is a Short Year and the minor part is an iterative number.The micro part (in semver, this is called the "patch" part) is also an iterative number. The first two numbers comprise a major version of CockroachDB, and the third denotes a minor release of that major version. For example, 21.1.6 is a version released in 2021, is part of the first major release of that year, and the seventh release in that series (21.1.0 being the first).

Once a pull-request has been merged into respective branch, a git tag should be made against the commit that contains the changes to cluster-ui and the version change. The form of the tag should be @cockroachlabs/cluster@[version] where [version] is the version found in the package.json. After creating a tag, push the tag to a remote referencing git@github.com/cockroachdb/cockroach.git.

To build the prerequisites for cluster-ui run the following commands from the root directory of CockroachDB.

If you have not done so already, request publishing permissions from the Cluster UI team at Cockroach Labs. You will be required to create an account on npm and configure two factor authentication. You will then be added to the @cockroachlabs npm organization and given permission to publish the cluster-ui package.

Before publishing, ensure that you have authenticated with the npm registry by running the following command,

To log in, you will be prompted for your credentials.

If you were logged in already, you will see the current authenticated user

Once you have authenticated, you are ready to publish to npm.

Go into the pkg/ui/cluster-ui subfolder, as you'll be publishing the package as specified by that package.json.

Note: If you've already updated version in package.json to reflect the new version, you'll need to temporarily change this back to the older version (i.e. the version that's currently listed on npm). After running the command below, the script will then automatically reverted back to the newer version.

To publish the package, run the publish command,

During a publish you can expect to see some prepublish steps before the package is delivered to the registry. clean will delete the contents of the dist directory and build will compile TypeScript and bundle the code using Webpack. The publish will create a tarball and send it to the registry.

At the time of writing, June 2021, CockroachDB v21.1 is the latest stable version so cluster ui versions from this release branch should be tagged as both latest and release-20.1. CockroachDB v21.2 is currently under development and so versions published from master should be tagged as next and are expected to have a prerelease identifiers (a portion of the version appended by a -, for example 21.2.0-prerelease-1) This is to designate that a .0 version of 21.2 should be reserved until CockroachDB v21.2 is released publicly.

Distribution tags are easily modified and so there should be little concern about adding or removing them as needed. To add (or modify) a distribution tag, run the following command,

If a mistake is made, simply add again the correct version/tag pair or remove the tag with the following command,

To see what the current distribution tags for cluster-ui, run