z1 is a Node.js cluster management program. It works on Linux Debian, Ubuntu, and other Debian based distributions.

When using Node.js on a web server, one will somehow come to the point where he wants to start multiple processes for one app. The main goal of z1 is to simplify the creation and management of Node.js processes.

This animation shows how simple it is to start a Node.js application with z1.

Note: You might want to run z1 resurrect automatically after rebooting your system. It will start the z1 daemon and all the apps that were running before. (see: install command)

Before you can start your Node.js app, you need to add a few things to your package.json file.

Important: z1 needs to know when your Node.js program (e.g. a web server) is successfully started. If you app uses ports, z1 will automatically know when it listens to all the specified ports. It will then assume, that you app is completely started. If you app does not use any ports, you must require z1 in your program and call the z1.ready() method.

If you are running z1 locally, you can set NODE_ENV=development. This will cause z1 to use the devPorts and devWorkers (if specified) instead of the ports and workers properties from the package.json. The default timeout for stop and restart will be set to 0ms.

There are some environment variables that automatically z1 sets for each process:

These variables can't be overwritten.

After you prepared the package.json file of your app, you can now start it. First go to the directory where the package.json of your project is located. Type the following command into your terminal:

This command works regardless of how many workers you have specified in the package.json file. If your app was successfully startet, the output should look like this: 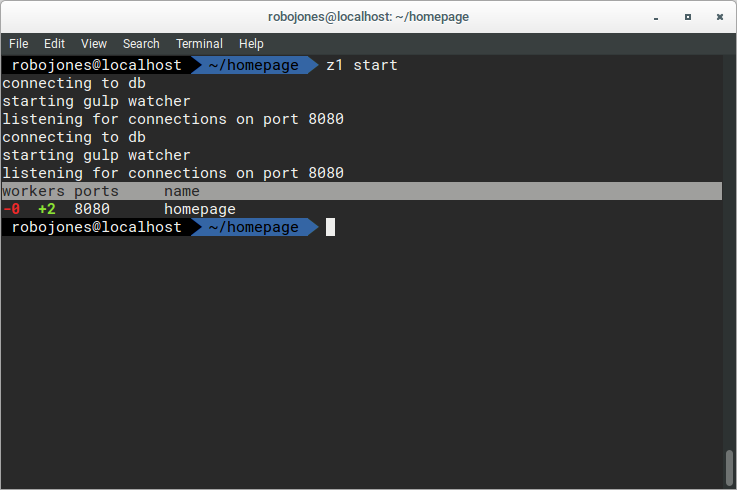 As you may have noticed, each log is displayed twice. This happens because two workers are started for the app and the logs of all workers are being displayed.

If you want to start your app with different settings than the ones specified in the package.json, you can add them to to the z1 start command.

You can restart your app to apply updates for your app or changes to the package.json. The restart process will be gapless and no requests will be refused. Just type the following command:

The first argument for the z1 restart command is the name that was specified in the package.json when you started the app. If you are running this command inside the directory of the Node.js application, z1 will automatically detect the name.

Output of the example from above: 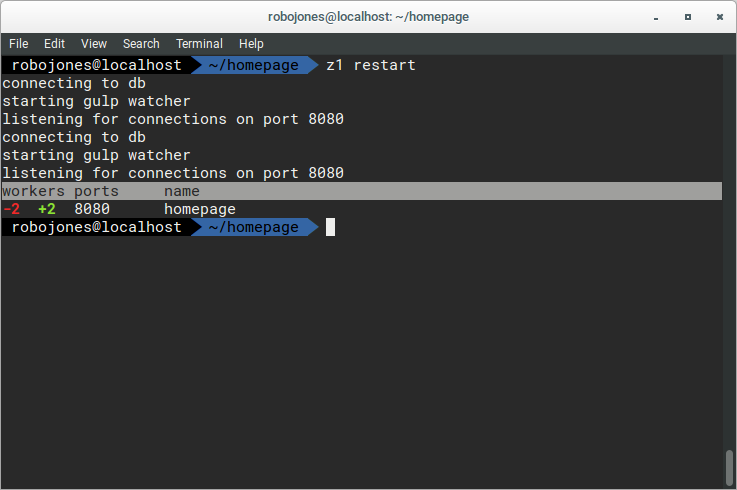 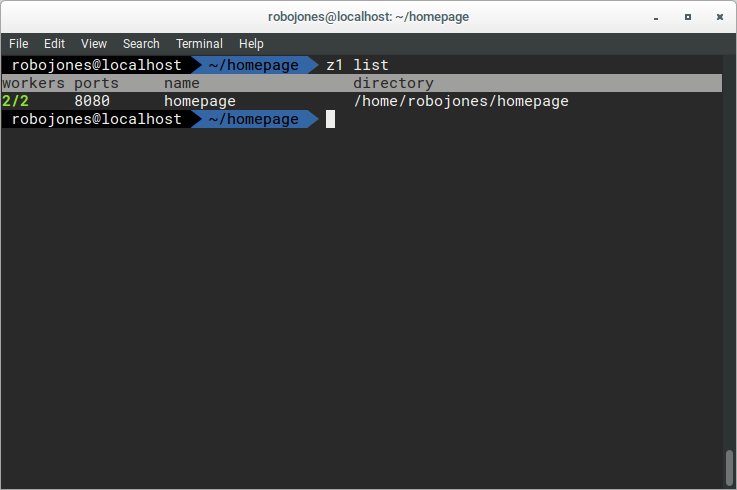 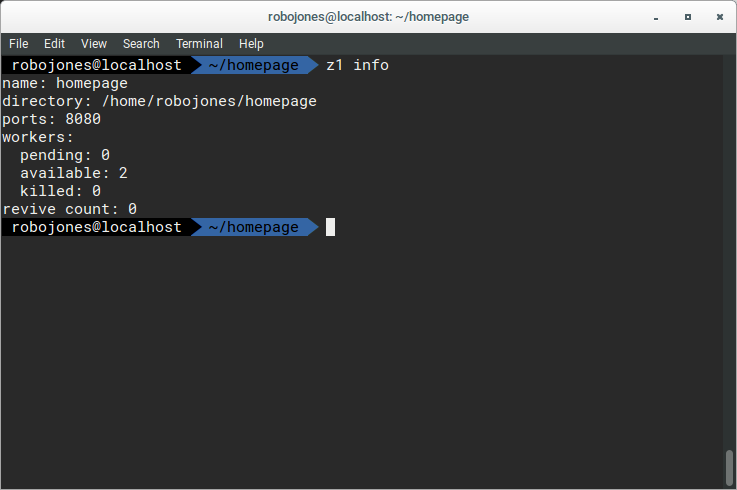 To stop an app just type: --timeout is a number specifying the maximal time that the workers are allowed to run after they are killed (in ms). The default value is 30,000ms. If you set it to "infinity" the old processes might run forever.

This will kill the z1 daemon process and therefore all apps and workers.

After you typed exit, you can use the following to start all the apps that were running before:

Note: If you are starting a new app before z1 resurrect, the old apps will not be restored.

This command allows you to add and remove additional features.

You can start your app with custom arguments.

This would start an app with the name 'custom app' that is listening on port 80. Everything behind the -- will be passed to the workers. In your code you can get the "hello" as argv.

Besides the CLI, you can also require z1 to control your apps with a Node.js program.

Returns a <Promise> that gets resolved when the app is started. If you set immediate to true, the promise gets resolved immediately after your command was transmitted to the daemon.

By default It resolves to an object with the following data:

Returns a <Promise> that gets resolved when the new workers are available and the old ones are killed. It resolves to an object with the following data:

Returns a <Promise> that gets resolved when the old workers are killed. It resolves to an object with the following data:

Returns a <Promise> that gets resolved to an object that contains information about the app.

Returns a <Promise> that resolves to an object containing data about all running workers.

You can access the data for an app by using the name as key:

The output would be:

Returns a <Promise> that resolves to an empty object. It gets resolves after the z1 daemon has exited.

Returns a <Promise> that resolves to an object.

It will be rejected if z1.resurrect() or z1.start() was called before.

Resurrect will start all apps that were running before the daemon was killed.

Returns a <Promise> that resolves when the ready signal has been transmitted.

This function must be called if an app does not use any port. It will tell the z1 daemon that your app has been started successfully.