This project is still in a very early stage, eventually it will be a complete set of modules that you can use to build your own web-based DAW. This project is the successor of 2 of my earlier projects: heartbeat and qambi, and as such it will contain all functionality of these libraries combined. The current code will be cut into the smallest possible modules for optimal flexibility.

Where heartbeat and qambi need to be imported in their entirety, with the new modular approach you can just import the modules that you need for your project. Also you can change or extend the modules without the risk of breaking anything in the rest of the library because all modules will be able to run without requiring a specific context.

Note however that some modules will need the functionality of other modules, so if for instance module A needs module B and you change something in module B it might break module A. But there are numerous ways to circumvent this from happening, the simplest solution would be to create a new module B1 based on module B. A more elaborate solution is that you make your changes in module B compatible with module A. For every module I will compile a list of the modules that are dependent on that module.

Notably heartbeat stores a lot of state inside the library code which oftentimes leads to memory leaks or other unwanted behavior. In qambi a part of the state is kept in the members of the instances of some classes, the class MIDIEvent for example.

The new approach will hold no state and use as little classes as possible. This means that state management should be implemented in the code of your project. I often refer to this as 'user code', i.e. the code of the user that uses the module, not sure it that is an appropriate term.

My goal is to create modules that will be basically just functions that transform data structures. Because the data structures are plain objects, they can be very easily stored in any state management setup.

Here is a quick draft of the order in which I will build the new modules:

So heartbeat (all lowercase) is the module and Heartbeat (with capital) is the namespace where all heartbeat typings live.

I have deliberately chosen a descriptive name instead of a more 'poetic' name such as heartbeat and qambi because the project is basically just a set of building blocks, not a complete product; I think a poetic name is more something that you put on a completely working DAW (that may or may not use the modules in this project).

The name heartbeat was chosen because before the metronome was invented (and wide-spread) musicians derived tempo from their heartbeat. But the name is actually somewhat misleading because in technology a heartbeat usually refers to the state of a service. The name qambi is a Zulu word that means creator, inventor. I like that name very much but I think it is a bit over the top if I would use it for this project which merely is a simple set of modules.

Also I think the term webdaw, or cased like WebDAW, describes a concept, a way of organizing things. It would be great if together with developers of related libraries some kind of standard can eventually be evolved. Then if our libraries adhere to that standard you can seamlessly connect library A to library B as long as they are both WebDAW compliant.

I couldn't get webpack-dev-server to work and I didn't have the time to investigate it so for development I use the python webserver:

Now you can see the examples at http://localhost:8000/examples.

Because I run the webserver in the root folder, the examples run on github.io as well (the examples need to have the right path to the assets folder).

You can find the live version here

This version uses so called anchors to determine the position of the playhead. The anchors are calculated based on the bounding boxes of the rendered svg note elements and contain the following information:

This is done because otherwise the playhead would travel into the next bar before jumping to the next staff or measure, see screenshots with the anchor debugger: 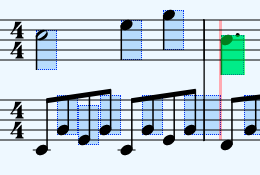 Loop set on the first bar 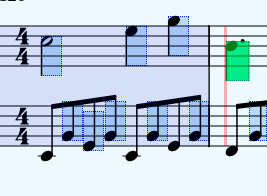 The anchor debugger shows all anchors in blue and the anchor that is currently used by the playhead is drawn in green. You can turn this on by importing the setup method from debug_anchor.ts:

A word about the ghost key: when a score contains a multi-bar rest, we only have a single graphical element in the score to calculate the playhead position. This can be too coarse and therefor ghost anchors are rendered for every beat in multi-bar rest bars:

Update the position of the playhead

This is done by two actions:

In index.ts you will find the event listener for setPlayheadFromPointer and the other action setPlayheadFromSong is called on every animation frame by songWrapper.ts.

The calculation of the current anchor based on a user event or the song's position is all done in a webdaw module so you only have to process the returned anchor data.

There is an option to make the playhead jump from anchor to anchor instead of smoothly travelling from one the other by setting smooth to false;

For example code see the code of the 2 action files listed above.

You can use the webdaw module osmd/getPlayheadAnchorData.ts to retrieve all anchors from the rendered score, in the example this action is called from scoreWrapper.ts. Note that you have to retrieve the anchor data again after the score has resized.

In OSMD an upbeat always has its measureNumber key set to 0 which is very unhandy because you can't simply convert measure numbers to indexes by deducting 1 from the measure number. Therefor getPlayheadAnchorData returns a key upbeat which is true if the score starts with an upbeat; this is key is necessary for multiple calculations, for instance for calculating the right position of a loop.

Quick run-through of the files

In the actions folder:

In some scores the anchor are not calculated correctly which results in the playhead jumping back and forth inside a measure. I am not yet sure whether this problem originates in the code that calculates the anchors or that is because of errors in the MusicXML file. Rest assured that this bug is rather rare. You can easily spot wrong anchor data if you turn on the anchor debugger:

As you can see there are 2 anchor that are way too long. If this error occurs in your score and you can't solve it in the score (for instance by importing and exporting the score in MuseScore) then you can turn off smooth which makes the playhead jump from anchor to anchor. Less elegant but at least the playhead isn't jumping all over the place.