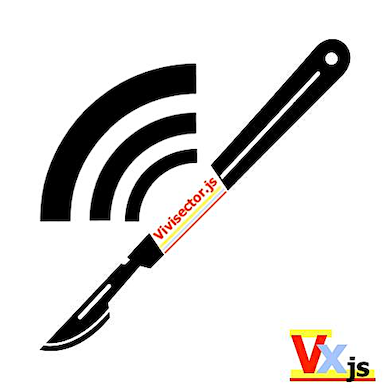 Vivisector | Convert any object into an evented, reactive state machine

Convert any object into an evented, reactive state machine.

Vivisector is a light-weight building block for pub/sub modeling, state management, and reactive programming. It works by enabling you to add event listeners to plain objects and arrays, binding N actions to their state mutations. Registered actions can then intercept state transitions and decide whether to commit or revert them.

Before we dive in, here's a couple of quick notes that are rather important:

This function will take our object or array and return an evented copy.

In this example, we'll vivisect an array and register a callback function for the add event. Our callback will be invoked whenever new elements are added to the array. We'll keep things simple for now by passing along the alwaysCommit option, which means any state transitions associated add events will always be committed.

Both arrays and objects can be vivisected in this manner:

The object's prototype is unaffected, save for the added event registrars (more on these later)

Event handlers are registered by calling subscribe. This method will exist on every vivisected object:

And when we're done, we can remove the handler by passing a reference to it into the unsubscribe method:

This section documents all builtin Vivisector events and their behaviors.

A new element or property has been added to the target. 'Add' typically constitutes as a new indexed property that previously did not exist.

Note: Operations such as Array.prototype.push are considered batched events if provided more than a single argument

An existing element or property has changed.

An element or property has been deleted.

Fires on: methods such as pop; delete called on a property

Fires on: methods such as shift, unshift, push when called with multiple elements

Methods bound to all vivisected objects:

Bind the callback handler to fire whenever an event of eventName has been triggered.

Throws when: provided an invalid event type or non-function handler

Remove an existing callback from the respective event-type to which it has been registered.

Throws when: provided an invalid event type or non-function handler

As we've seen throughout the documentation, Vivisector events provide the opportunity to commit or revert state mutations. Every event callback is provided a done function with the following signature:

You'll have the opportunity to preview what the state transition would be by inspecting the nextState property. Then, you may programmatically commit the transition by passing true to the done function.

Passing false or not invoking done at all will revert any state changes and nextState will not take effect. The exception to this rule is the alwaysCommit option, which may be passed when registering the callback.

What's Next for Vivisector?