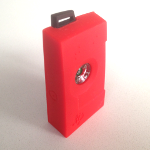 This allows you to

The [thing-it-device-ti-sensortag] Plugin is installed with [thing-it-node], hence there is no need to install it separately.

Install the thing-it Mobile App from the Apple Appstore or Google Play and set it up to connect to [thing-it-node] locally as described here or just connect your browser under http://localhost:3001.

Push the Advertisement Button on the SensorTag.

On the [thing-it] Mobile App or in the browser, confirm the registration of the SensorTag.

You will be able monitor the SensorTag from the [thing-it] Mobile App immediately.

The UI depends on the settings of sensor quantities to be observed, e.g.