Small JS module for calling asynchronous actions which require an "updated state", in order to be executed.

You can install it using _NPM or Yarn.

Use the --save or --saveDev parameters accordingly your needs.

If your system supports ES2016 modules but it isn't automatically checking the module property and you want to use the ES2016 version, then you can import directly the same script indicated by the module property, present in the pacakge.json file.

On the other hand, if you need the ES5 version, you can directly require the module, or even you need it so, you could require the script indicated in the main property of the pacakge.json file.

Is it production ready?

It should be; we developed the module with tests and currently it has 100% coverage, in case that's a metric that matters to you.

We started to use it in production in the front-end of our product, however it hasn't passed too much time since we developed and started to use it, so, for being cautious, we decided to keep the version of the module on 0.0.X, which means that's in development. In reality, we don't expect any change in the public API, and if we don't realize that we have to do any and we don't find any issue with this module in our production environment for a several weeks, then we'll bump its version to 1.0.0.

So far, we can say, use it under your risk.

Small JS module which allows to call asynchronous actions which are required to have an "updated state", which is shared by all them, and when the state isn't up to date, they get, some how, a result which notifies them to update the state previous to be executed again, in order to be executed.

A clear example is a HTTP API service which requires to send an updated authorization token for some of its endpoints, so the actions, which are requests to such endpoints, send the authorization token on each request and the server responds, some how (status HTTP code, specific header, etc), that the request cannot be fulfilled, when the token is outdated, until the token is up to date; the API offers a specific endpoint which allow to renew/refresh the token, in order to update it.

Meanwhile a auto state functionality can be implemented inside of the business logic, this module abstract such part from it, making the logic of this functionality easy to be tested and not to have to repeated each time that's needed.

This module has an implementation which avoids multiple calls to the state update action (henceforth updater) and/or actions, when more than one action has been called and notified with a "required updated state", because, meanwhile the updater is executing, the actions are on hold and the ones which were run concurrently, previously any of them was notified with a "required updated state", the updater is only called once, and when it finishes successful, the actions are recalled, when they were called previous the notification, or called, when they were on hold. In case that the updater finishes unsuccessful, all the actions calls return the result of the updater.

In the following image, you can see an UML state/activity diagram of the implemented logic by this module. 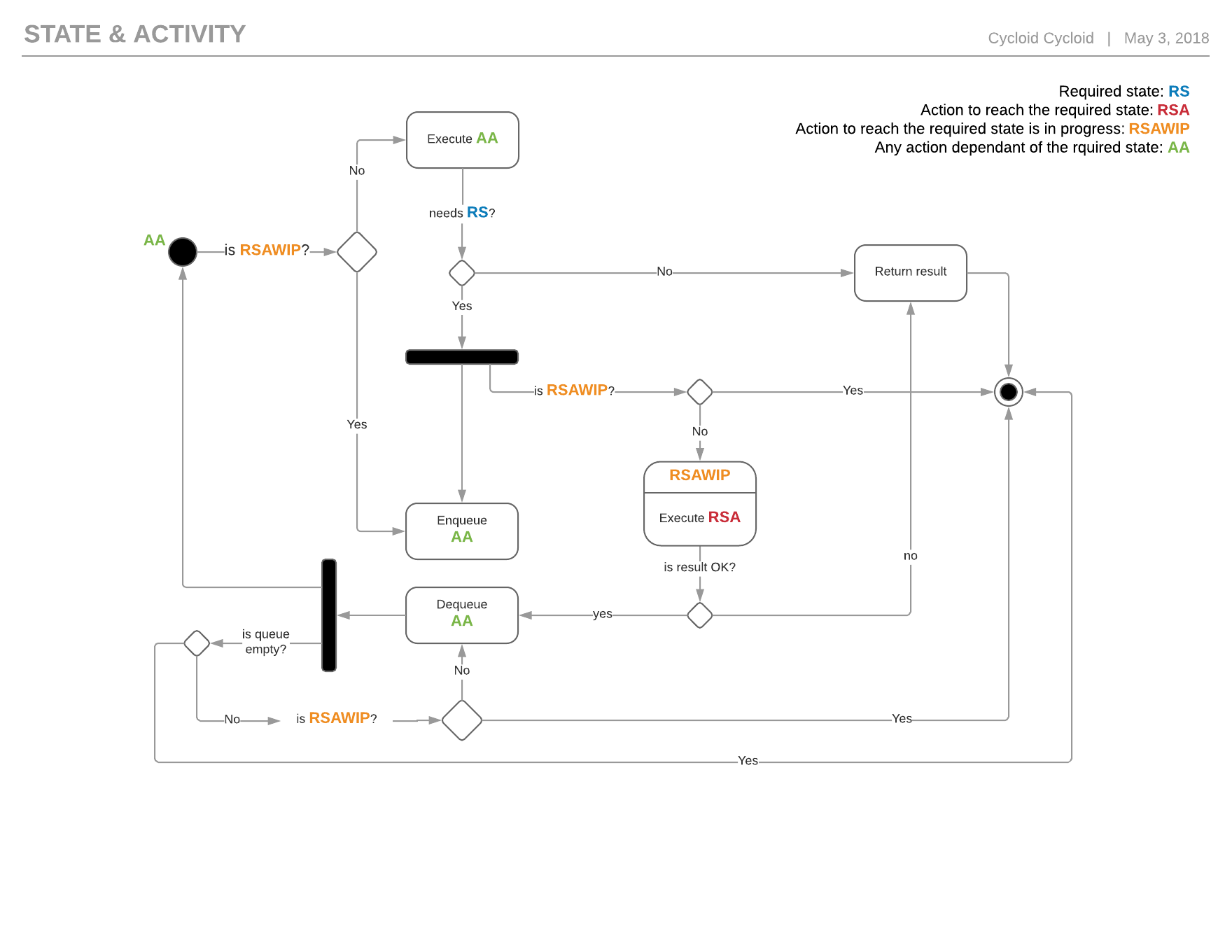 Below, the same diagram but for the HTTP API service commented above. 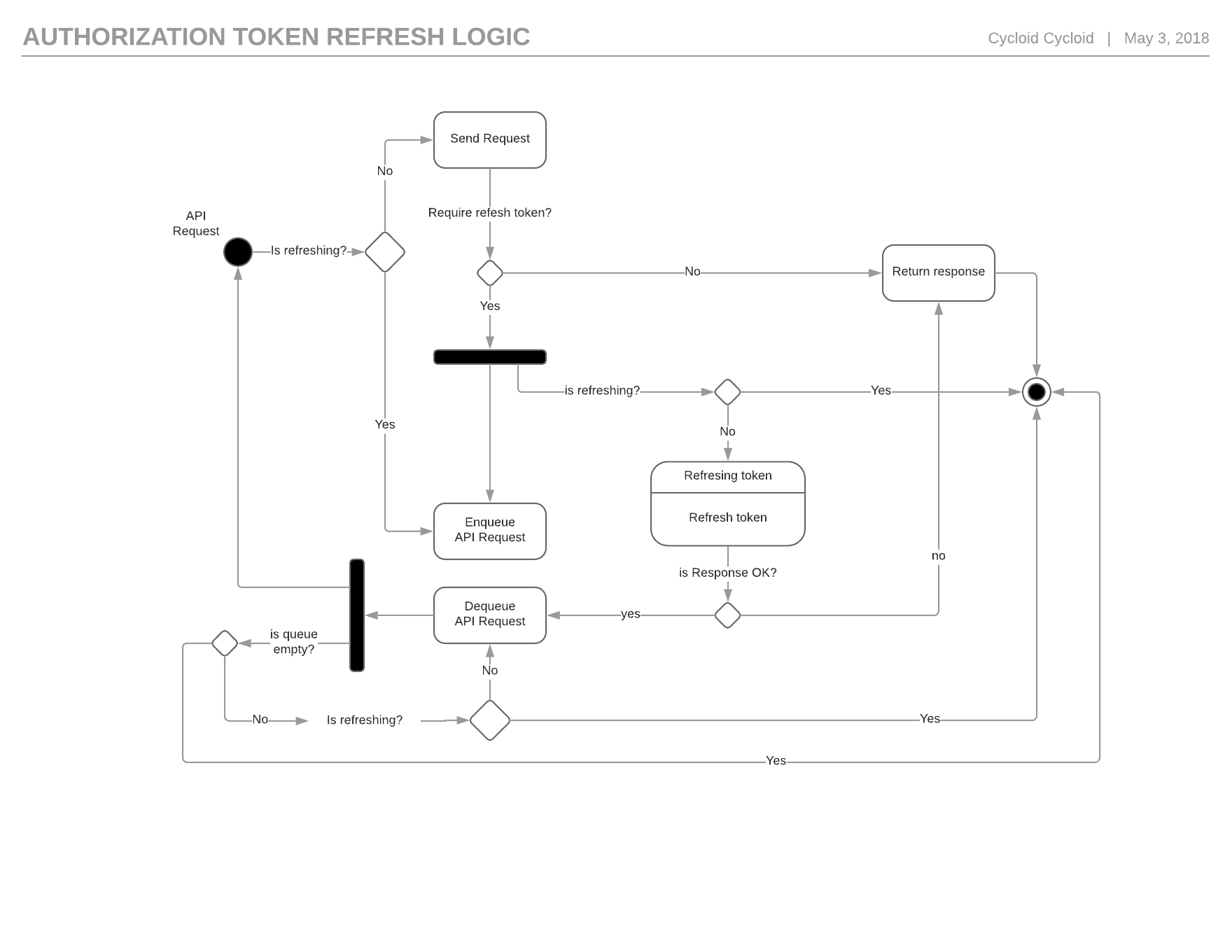 On the other hand, the updater must be determined previously to be used, it's likely the most of the cases and we haven't thought in any use case which may need to change the updater once an instance returned by one of the constructor functions of this module; however, it doesn't mean that there is one, so if you have one which require it, you may want to open an issue to expose it and we'll decide if we should create a new version of the module which allow to do so or not.

The public source code (i.e. the public API or exported functions, if you want to called it in such way) is documented using the JSDoc syntax, so you can see the API documentation in the Github pages of this repository under the path docs/api.

Notes about the implementation

The API of the module, may look a bit weird if you consider that it's a javascript module and we could have done the same with only one function; however we believe, maybe influenced by other programming languages, explicit is clear than implicit, so the constructor and one of the methods exposed by the instances returned by the constructors, have a counterpart which do the same but allowing to pass a context object (that's basically that the updater or action will be called with bind JS function, using such context).

Another thing to state is that JS Classes haven't been used for the implementation, and you may think that we should/have/may use them, meanwhile that's totally right, we have our reasons for not using them, so we haven't used them because we don't know them, it's a mistake or another thing, it's our choice.

We have written this section with these 2 clarifications, to make you aware of them, and avoid that you be in a doubt of them and open an issue with the only purpose of changing so.

A conventional NodeJS development, so you need Node and NPM.

Although BabelJS is used, you'll see that in the packgage.json file, it's indicated that node should be greater or equal than 9.0.0, that is because we developed with it and we haven't bother to test it in previous Node versions, so we know that it work on this version and we can ensure that it will probably work in the following newer versions, but we don't know if it works on previous ones, although we think that in some previous ones should.

The pacakge.json also contains the scripts which are needed when developing this module, they are self explanatory and some of them must be used in a branch which is sent through a PR, as they are required to run without any error in order to be accept and merged. Because you should familiar with NPM, and they are pretty clear, we don't list them in this document, basically, go an check package.json file scripts property to find them out.

Currently, everything must be run manually, we have planned to add a CI configuration at some point to run the linter and tests on new PRs and run the build and NPM publish once a PR is merged into the master branch and update the Github pages when the master branch gets updated, but for now isn't done.

The module is developed with ES2016 version, all the source is src including the tests, which are the files with the extension *.spec.js; however for not excluding possible consumers that requires to use an JS ES5 version, the sources are transpiled, with BabelJS, and made them available in the dist directory; that's what the NPM script build targets does.