To enable me to make state charts ...

A no-frills interpreter on line: state-machine-cat.js.org.

Within the Atom editor

There's an Atom package with syntax highlighting, a previewer and some export options. You can install it from within Atom (search for state machine cat in the install section of the settings screen) or use apm i state-machine-cat-preview if you're a command line person.

This is what smcat --help would get you:

... so to convert the above chart to sample.svg

Or, if you'd rather pull dot output through GraphViz dot yourself:

Leaving the options at the default settings usually deliver the best results already, so if they bewilder you: don't worry.

The --dot-graph-attrs (and the node and edge variants thereof) exist in case you want to override default attributes in the generated picture; e.g. to get a transparent background and draw edges as line segments instead of splines, use this:

When you pass the --desugar (⨻ experimental) switch, state-machine-cat will, before rendering, transform some pseudo states into transitions - see de-sugaring state machines for details.

state machine cat can write and read valid core constructs scxml documents. If you're into that sort of thing you can read all about it in State Machine Cat and SCXML.

After you npm i 'd state-machine-cat:

There's also a script available to embed state machines into html with script tags like <script type="text/x-smcat"></script>. Documentation for that 'in page' feature resides over at state-machine-cat.js.org/inpage.html

You're free to do so, but smcat doesn't check for it. It internally takes the notation into account, though and if you choose to export to json, scxml or scjson you'll see them nicely split out. 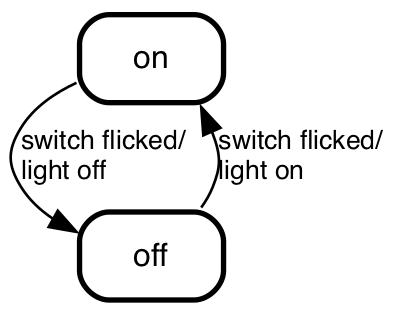 You note that smcat rendered the states in this chart top down instead of left to right. It did that because we told it so. You can do that too with --direction on the command line, or in atom by direction -> left to right or direction -> top down from the chart's submenu. 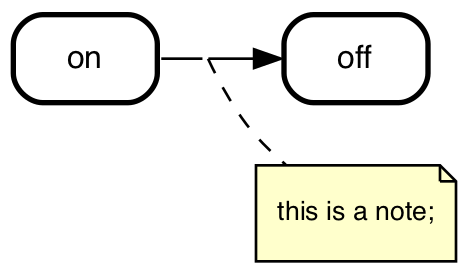 If you need to define activities (e.g. entry or exit triggers) on a state, you can explicitly declare the state and put the activites after a colon:

smcat recognizes the entry/ and exit/ keywords and treats everything after it on the same line to be the 'body' of the trigger.

Here too: you're free to use them, but you don't have to. smcat takes them into account in its internal representation and uses them in exports to json, scxml and scjson.

If you want to use a display names that differ from how you name the states (e.g. if the display names are long), you can do so by adding a label to them:

When initial or final, is part of a state's name smcat treats it as the UML 'pseudo states' initial and final respectively:

smcat recognizes states with history in their name as history states:

History states are shallow by default. If you want a history state to be deep just put that somewhere in the name (e.g. "running deep history" or running.history.deep) - and smcat will render them as such.

smcat treats states starting with ^ as UML pseudo state choice. Strictly speaking 'choice' is a superfluous element of the UML state machine specification, but it is there and sometimes it makes diagrams easier to read.

In UML you can fork state transitions into multiple or join them into one with the fork (one to many) join (many to one) and junction (many to many) pseudo states. Fork and join are represented by a black bar, junction by a filled circle. To make a join, fork or junction pseudo state, start its name with a ]. Here's an example of a join: 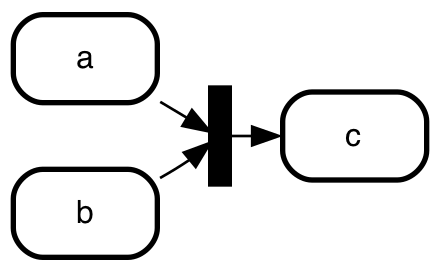 State machine cat automatically derives which of the three types you meant by counting the number of incoming and the number of outgoing connections:

If you want to defy UML semantics you can do that with explicit type overrides . 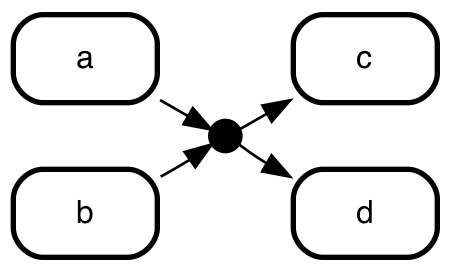 UML has a special pseudo state to indicate your state machine didn't exit properly: terminate. If you want to use it, declare it explicitly:

For proper exits you'd typically use the final state.

results in (/ is equivalent to):

It's possible to have state machines within states. the states stopped, playing and pause can only occur when the tape player is on:

If stuff is happening in parallel within a state you can express that too. Just make sure the state has the word "parallel" in there: 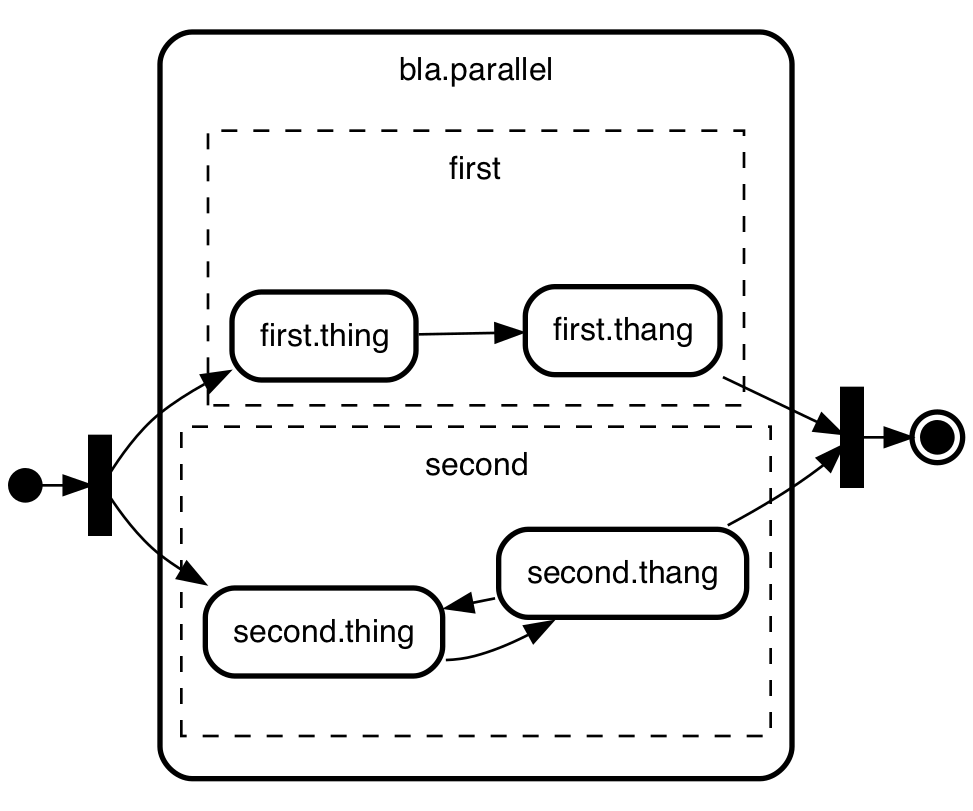 If you need to mark a transition in a nested state machine as either internal or external - use the type attribute. The default type for a transition is external - just like it is in SCXML. 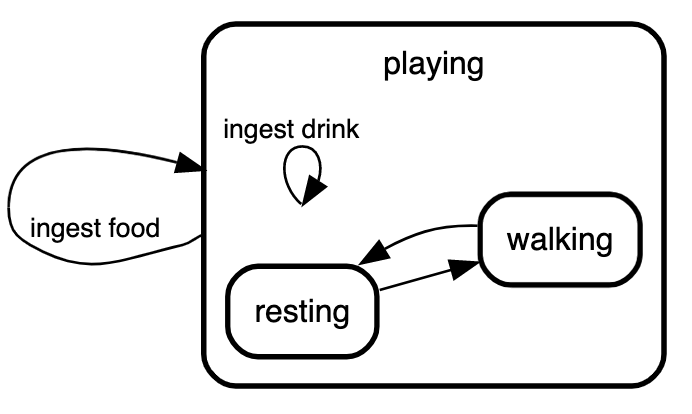 You can mark one or more states as active by adding active as an attribute for that state. E.g. to make the do state an active one in the demming circle, do this:

which will result in

As of version 4.2.0 state-machine-cat has (experimental) support for colors on both states and transitions and from version 8.1.0 for width on transitions.

... would yield this diagram:

What does 'experimental' mean?

The color attribute is probably here to stay, as will the width

However, I haven't found the balance between ease of use and expressiveness yet. Should the text in a state be rendered in the same color? should the background color automatically be rendered as well? In the same color, or in a shade smartly derived? Or should I include a bunch of color attributes (e.g. fillcolor, textcolor, textbgcolor) for ultimate control?

As of version 7.4.0 you can use the keyword class as an extended keyword on both states and transitions. When you render svg or dot you'll see what you entered there in the output in the class attributes of their respective elements, along with the type of element (either 'state' or 'transition') and optionally the type of state or transtion (e.g. for state: 'initial', 'regular', 'final' etc.).

Which will pass the class attributes on to the svg like so. E.g. the svg snippet for the a state will look like this:

overriding the type of a state

As you read above, state machine cat derives the type of a state from its name. In some cases that might not be what you want. In those cases, you can override the type with the type attribute, like in this example for the initialized state.

The values you can use for the type of a state:

I made the parser with peggy - you can find it at src/parse/peg/smcat-parser.peggy 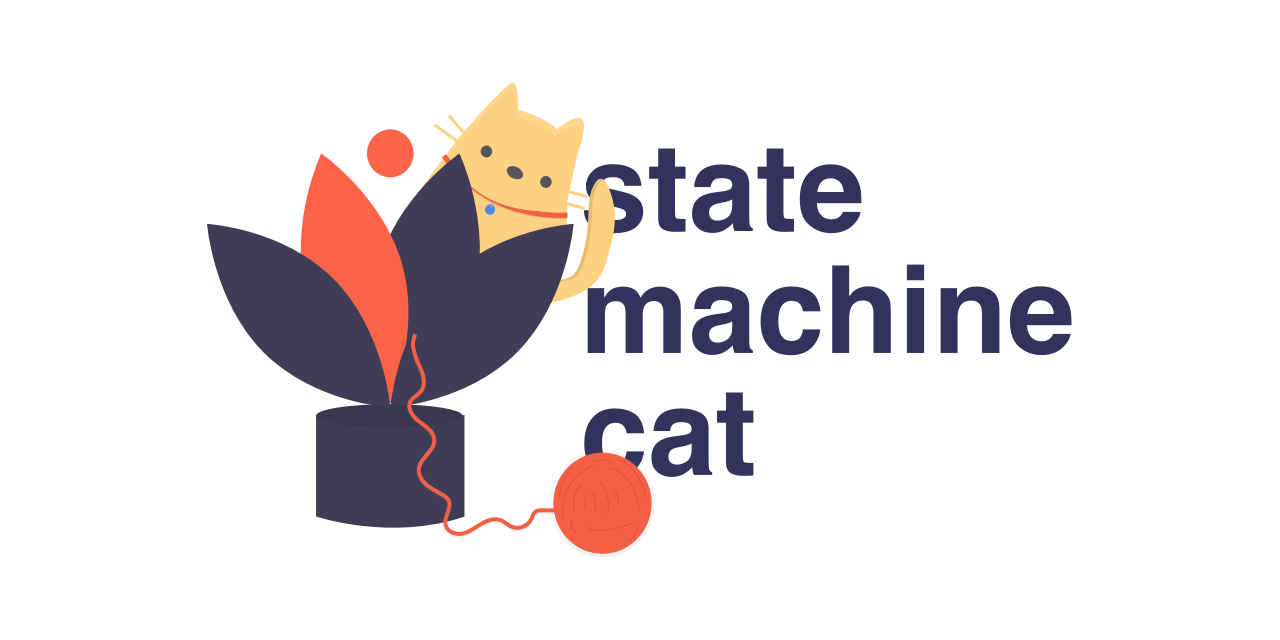