To get a better understanding of what SGD is for, take a look at this post on the Salesforce Developers Blog: Optimizing Unpackaged Deployments Using a Delta Generation Tool. 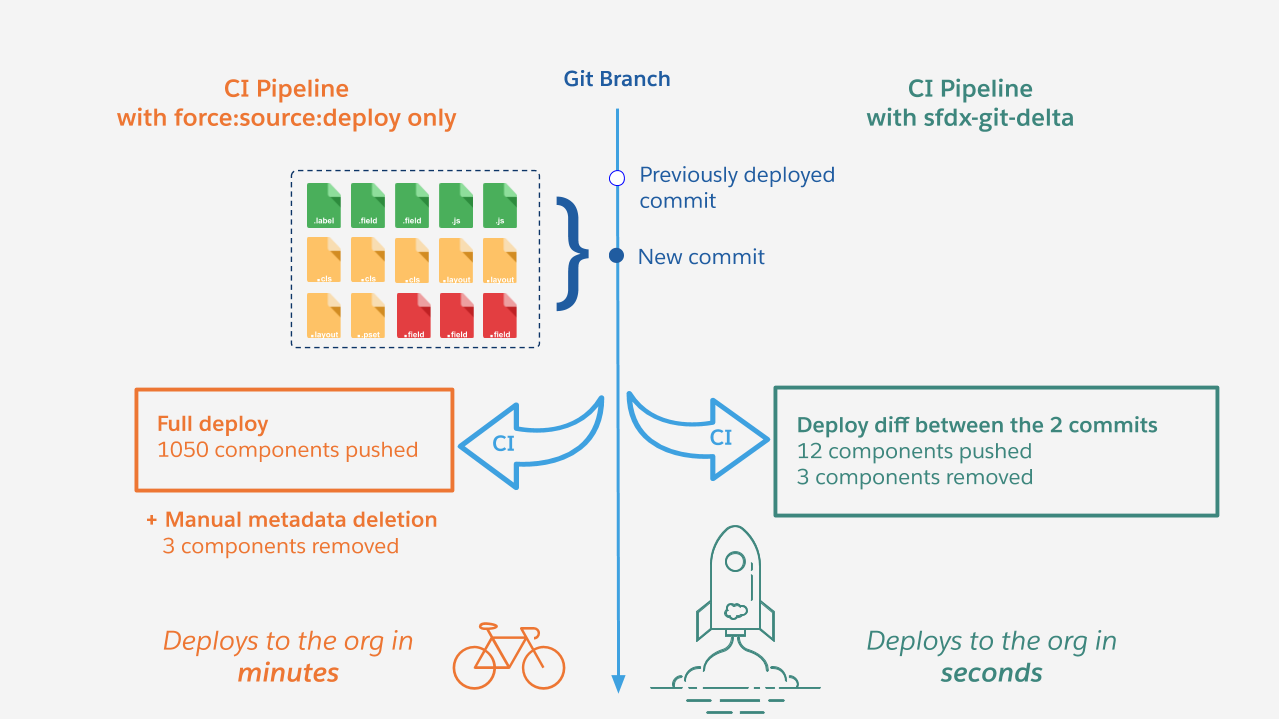 Is SGD for you?

If you are not a Salesforce Architect or Developer, probably not, sorry.

If you are a Technical Architect or Developer, then it’s a very useful tool for you, when the 3 conditions below are met:

SGD is designed to be part of a CI/CD pipeline (Jenkins, Bitbucket Pipelines, GitLab CI, GitHub Actions, Azure DevOps...) that handles the deployment of the sources to the Salesforce org(s).

Pro tips: If you are in the process of building your CI/CD pipeline, make sure you already have a fully functionnal pipeline before implementing delta deployments (otherwise it will just make it harder to debug your pipeline). It's also important to implement a bypass in your pipeline, to have to hability to fallback to full deployment in case the delta deployement is not behaving the way you expected it.

SFDX-Git-Delta is NOT an officially supported tool

Use it at your own risk, wear a helmet, and test it first before adding it to your pipeline

How to install it?

SGD is a Salesforce CLI plugin (sfdx sgd:source:delta). Run the following command to install it:

Because this plugin is not signed, you will get a warning saying that "This plugin is not digitally signed and its authenticity cannot be verified". This is expected, and you will have to answer y (yes) to proceed with the installation.

If you run your CI/CD jobs inside a Docker image, you can add the plugin to your image. Here is an example of a Dockerfile including the SGD plugin: https://github.com/mehdisfdc/sfdx-cli-gitlab

The Salesforce CLI plugin is now the only supported way to install SGD. There used to be another way to install it directly through yarn or npm. The legacy sgd command is now deprecated and will be decommissioned soon.

Node v14.6.0 or above is required. To make sure that the Salesforce CLI is using the expected node version for SGD, run sfdx --version before attempting to install the SGD plugin: if you see a node version below v14.6.0 in the output, you'll need to fix it first. If you encounter this issue while having installed the correct version of node on your system, try to install the Salesforce CLI via npm (npm install sfdx-cli --global) rather than with another installer.

How to use it?

If you run SGD on a Windows system, make sure to use double quotes to prevent the parameters from being interpreted by the terminal:

Let’s take a look at the following scenario:

The CI pipelines deploys the sources to Production anytime there is a new commit in the main branch.

In our example, the latest commit to main is composed of:

In this situation, we would expect the CI pipeline to:

From the project repo folder, the CI pipeline will run the following command:

Analyze the difference between HEAD (latest commit) and HEAD^ (previous commit), and output the result in the current folder.

1) A package.xml file, inside a package folder. This package.xml file contains only the metadata that has been added and changed, and that needs to be deployed in the target org.

In addition, we also could have generated a copy of the force-app folder with only the added and changed metadata, by using the --generate-delta (-d) option (more on that later).

Deploy only the added/modified metadata:

The CI pipeline can use the package/package.xml file to deploy only this subset of metadata:

The CI pipeline can use the destructiveChanges folder to deploy the corresponding destructive change:

Here are 3 examples showing how you can compare the content of different branches:

1) Comparing between commits in different branches For example, if you have commit fbc3ade6 in branch develop and commit 61f235b1 in branch main:

Generate a folder containing only the added/modified sources:

Using a package.xml file to deploy a subset of the metadata is propably the simpliest approach to delta deployments. But there are some situations where you may want to have the actual source files related to all the components that have been changed recently.

One example is to speed up object deployments: the package.xml approach will result on the entire sub-folder for a given object to be deployed. On the opposite, having a copy of the actual sources added/modified allows you to chirchugically deploy only the modified components.

This is where the --generate-delta (-d) option comes handy!

Let's use this option with our previous example:

In addition to the package and destructiveChanges folders, the sfdx sgd:source:delta command will also produce a copy of the added/changed files in the ouput folder.

Content of the output folder when using the --generate-delta option, with the same scenario as above: 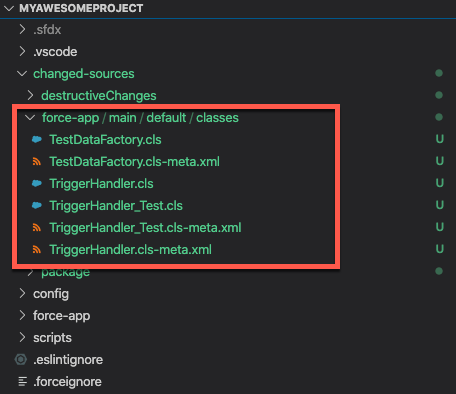 Exclude some metadata only from destructiveChanges.xml:

The --ignore [-i] parameter allows you to specify an ignore file used to filter the element on the diff to ignore. Every diff line matching the pattern from the ignore file specified in the --ignore [-i] will be ignored by SGD, and will not be used to add member in package.xml nor destructiveChanges.xml (and will also be ignored when using the --delta-generate parameter).

But, sometimes you may need to have two different ignore policies for generating the package.xml and destructiveChanges.xml files. This is where the --ignore-destructive [-D] option comes handy!

Use the --ignore-destructive parameter to specify a dedicated ignore file to handle deletions (resulting in metadata listed in the destructiveChanges.xml output). In other words, this will override the --ignore [-i] parameter for deleted items.

Explicitly including specific files for inclusion or destruction regardless of diff:

The --include [-n] parameter allows you to specify a file based on micromatch glob matching used to explicitly include the specific files, regardless whether they have diffed or not. Similar to the --ignore flag, this file defines a list of glob file matchers to indicate which git aware files should always be included in the package.xml package. Every matching the pattern from the include file specified in the --include [-n] will be included by SGD.

As with --ignore, sometimes you may need to have two different include policies for generating the package.xml and destructiveChanges.xml files. This is where the --include-destructive [-N] option comes handy!

For example, consider a repository containing multiple sub-folders (force-app/main,force-app/sample, etc) and the CI/CD platform generates a new file force-app/generated/foo that should not be included in the source:deploy command. You can create a file with a line matching this new file and specify this file using the --include-destructive [-N] parameter.

The --source [-s]parameter allows you to specify a folder to focus on, making any other folder ignored. It means the delta generation will only focus on the dedicated folder.

Generate a comma-separated list of the added and modified Apex classes:

Depending on your testing strategy, you may be interested in generating a a comma-separated list of the added and modified Apex classes (to use in the sfdx force:source:deploy --testlevel RunSpecifiedTests command, for example).

To cover this requirement, you can use a tool such as yq to parse the content of the package.xml file produced by SGD:

Use the module in your own node application

If you want to embed sgd in your node application, install it has a dependency for your application

Then use the javascript module

SemVer is used for versioning.

Contributions are what make the trailblazer community such an amazing place. I regard this component as a way to inspire and learn from others. Any contributions you make are greatly appreciated.

This project is licensed under the MIT License - see the LICENSE.md file for details