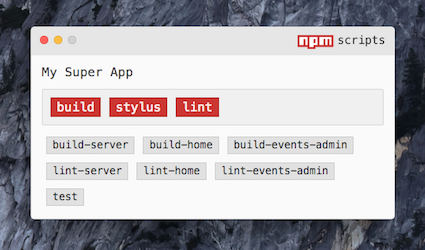 Install as a Dev Dependency

Installing as a dev dependency allows anyone who downloads your project to also get access to the gui... for free!

To launch Screwy, you must be in a directory with a package.json file.

If Installed as a Dev Dependency (Recommended)

You must create an npm script task in the package.json that runs the screwy command and then you would run npm run <command_name> from the terminal.

Installing as a dev dependency is recommended because it allows the Screwy to be bundled with your project and available for everyone who run npm i in your project.

Whether Screwy is installed globally or as a dependency, any text output associated with any npm script task will be printed to the command line where Screwy was launched.

Processes will die automatically when they finish or when the app is closed, but there may be times when you want to manually kill a process.

You can also use the KILL command with file watching and hotkeys.

You can tell Screwy to watch files and how to respond to those changes. You need to create a watch block in the .screwyrc file. You can watch directories, files, and use the * and ** wildcards.

After specifying a path, you need to specify which npm script task to respond to the file change and how it should respond. There are 3 options regarding the type of action to perform:

NOTE: A whitespace is required after any of the keywords.

You can tell Screwy to run a command whenever another specific command finishes. Within the same block as file watching, simply replace the file path with CMD <command_name>

In the example, the RESTART start-server command will run every time the transpile-scripts command finishes and when index.js is changed.

Ever wanted to run an npm script by hitting a key combination on your keyboard?

Hotkey combinations are configurable in the .screwyrc file. These allow you to trigger any npm scripts without needing to even click on the button or even being focused on the GUI window.

Again, you can have the GUI window minimized and the hotkeys will still trigger button clicks, and output will be sent to the terminal.

Hotkeys are defined in the .screwyrc file. They require the name of the hotkey combination as the key and the npm script as the value.

Just as with file watching, the START, RESTART, and KILL commands may be used with the npm task name.

If you expect others to run Screwy on a different platform than you are developing on, you will need to specify the platform to avoid conflicts.

For Mac, use: OSX or darwin

For Linux, use: linux

More hotkey examples are in the Configurations section.

Screwy will automatically search for a .screwyrc in the same directory as the package.json. It should be in json format.

These are the available options:

Any script not specified in primary or exclude will show up as a normal button.