This document is structured as follows :

We are going all along to refer to a image search application example to illustrate our argumentation. Cf. Example section for more details.

In a traditional architecture, a simple scenario would be expressed as follows : 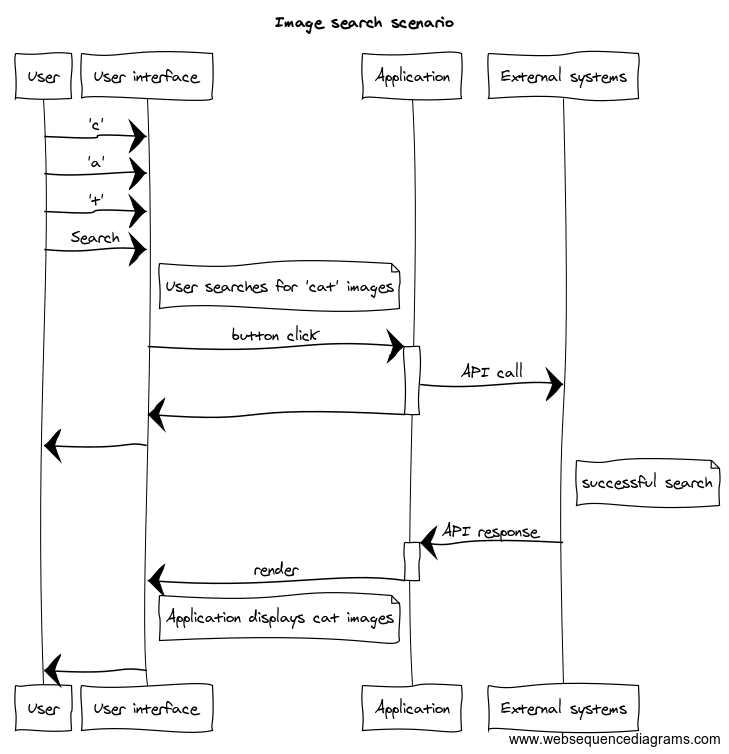 In our proposed architecture, the same scenario would become : 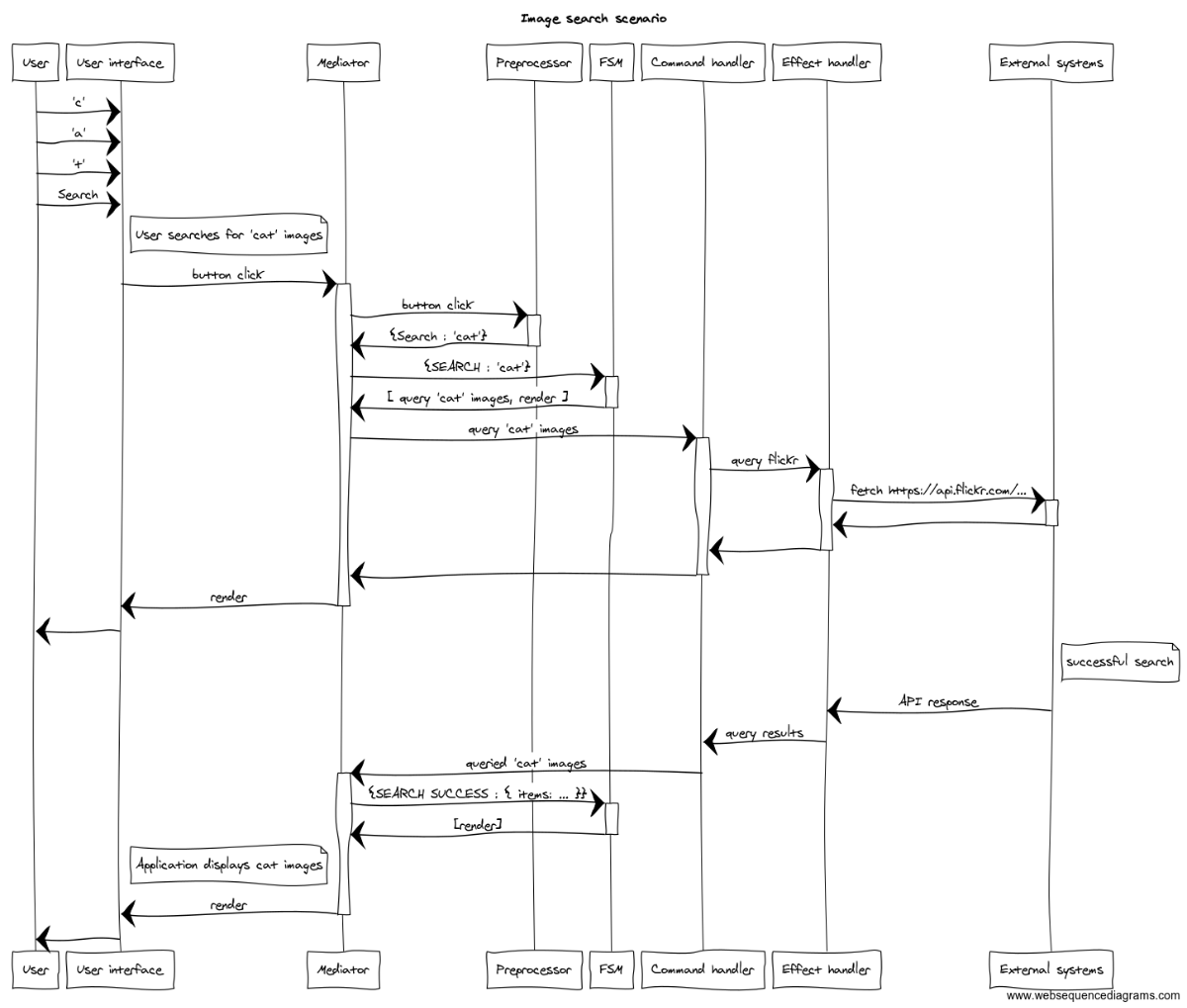 In that architecture, the application is refactored into a mediator, a preprocessor, a state machine, a command handler, and an effect handler. The application is thus split into smaller parts which address specific concerns :

While the architecture may appear more complex (isolating concerns means more parts), we have reduced the complexity born from the interconnection between the parts.

Concretely, we increased the testability of our implementation :

We also have achieved greater modularity: our parts are coupled only through their interface. For instance, we use in our example below Rxjs for preprocessing events, and state-transducer as state machine library. We could easily switch to most and xstate if the need be, or to a barebone event emitter (like emitonoff) by simply building interface adapters.

There are more benefits but this is not the place to go about them. Cf:

react is a peer dependency.

For the impatient ones, you can directly review the available demos:

We want to have an integration which is generic enough to accommodate a large set of use cases, and specific enough to be able to take advantage as much as possible of the React ecosystem and API. Unit-testing should ideally be based on the specifications of the behaviour of the component rather than its implementation details, and leverage the automatic test generator of the underlying state-tranducer library. In particular :

As a result of these design goals :

We expose a <Machine /> React component which will hold the state machine and implement its behaviour using React's API. The Machine component behaviour is specified by its props. Those props reflect : the underlying machine, pre-processing of interfaced system's raw events, a set of functions executing machine commands and effects on the interfaced systems. The DOM rendering command handler is imposed by the <Machine /> component but can be customized via effectHandlers[COMMAND_RENDER] (see example).

Our Machine component expects some props but does not expect children components.

To showcase usage of our react component with our machine library, we will implement an image search application. That application basically takes an input from the user, looks up images related to that search input, and displays it. The user can then click on a particular image to see it in more details.

The user interface behaviour can be modelized by the following machine: 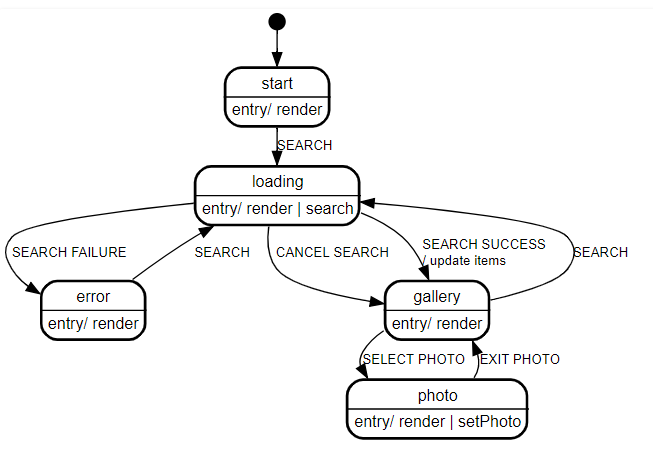 Let's see how to integrate that into a React codebase using our Machine component.

The machine is translated into the data structure expected by the supporting state-transducer library:

A stateless component to render the user interface

The machine controls the user interface via the issuing of render commands, which include props for a user-provided React component. Here, those props are fed into GalleryApp, which renders the interface:

Implementing the user interface with <Machine />

We have our state machine defined, we have a component to render the user interface. We now have to implement the full user interface, e.g. processing events, and execute the appropriate commands in response. As we will use the <Machine /> component, we have to specify the corresponding props for it. Those props include, as the architecture indicates, an interface by which the user interface sends events to a preprocessor which transforms them into inputs for the state machine, which produces commands which are processed by command handlers, which delegate the actual effect execution to effect handlers:

We now have all the pieces to integrate for our application:

Alright, now let's leverage the example to explain what is going on here together with the <Machine /> semantics.

First of all, we use React.createElement but you could just as well use jsx <Machine ... />, that really is but an implementation detail. In our implementation we are mostly using core React API and hyperscript rather than jsx. Then keep in mind that when we write 'the machine', we refer to the state machine whose graph has been given previously. When we want to refer to the Machine React component, we will always specifically precise that.

Our state machine is basically a function which takes an input and returns outputs. The inputs received by the machine are meant to be mapped to events triggered by the user through the user interface. The outputs from the machine are commands representing what commands/effects to perform on the interfaced system(s). The mapping between user/system events and machine input is performed by preprocessor. The commands output by the machine are mapped to handlers gathered in commandHandlers so our Machine component knows how to run a command when it receives one.

A run of the machine would then be like this :

This is it! Whatever the machine passed as parameter to the Machine component, its behaviour will always be as described.

Note that this example is contrived for educational purposes:

Types contracts can be found in the repository.

Prior art and useful references