The videojs-contrib-ads plugin provides common functionality needed by video advertisement libraries working with video.js. It takes care of a number of concerns for you, reducing the code you have to write for your ad integration.

Maintenance Status: Stable, in its own interesting way

In addition to the video.js library, you'll need two files from this project: videojs.ads.js and videojs.ads.css. After you build the project they are both in the dist directory.

For development, include the CSS in your HTML's <head> section with a <link> tag:

Then, include the JavaScript file after video.js, but before your integration code:

You may also use the Javascript and CSS links from the following to get started: https://cdnjs.com/libraries/videojs-contrib-ads

With this basic structure in place, you're ready to develop an ad integration.

Once you call player.ads() to initialize the plugin, it provides six interaction points (four events and two methods) which you can use in your integration.

Here are the events that communicate information to your integration from the ads plugin:

Note: A contentplayback event is sent but should not be used as it is being removed. The playing event has the same meaning and is far more reliable.

And here are the interaction points you use to send information to the ads plugin:

In addition, video.js provides a number of events and APIs that might be useful to you. For example, the ended event signals that the content video has played to completion.

Additional Events And Properties Your Integration May Want To Include

This project does not send these events, but these events are a convention used some some integrations that you may want to consider sending for consistency.

An optional feature that contrib-ads supports is ad macros. Ad macros are often used by ad integrations to support addition of run-time values into a server URL or configuration.

For example, an ad integration that supports this feature might accept an ad server URL like this:

In the ad integration, it would use the videojs-contrib-ads macro feature to process that URL like this:

This would result in a server URL like this:

* Returns 0 if video is not loaded. Be careful timing your ad request with this macro.

A macro such as {pageVariable.foobar} allows the user access the value of any property on the window object. Only certain value types are allowed, per this table:

An optional feature that allows the manipulation of metadata tracks, specifically in the case of working with advertising cue points.

For more information on the utility methods that are available, see cueTextTracks.js.

A track is 'enabled' if the track.mode is set to hidden or showing. Otherwise, a track is disabled and is not updated. It is important to note that some tracks may be disabled as a workaround of not being able to remove them, and so should not be re-enabled. Ad integrations should be careful about setting the mode of tracks in these cases and shadow setMetadataTrackMode to determine which tracks are safe to change. For example, if all tracks should be hidden:

Here's an outline of what a basic ad integration might look like. It only plays a single preroll ad before each content video, but does demonstrate the interaction points offered by the ads plugin.

This is not actually a runnable example, as it needs more information as specified in the code comments.

Your actual integration will be significantly more complex. To implement midroll ads, you'd want to listen to timeupdate events to monitor the progress of the content video's playback.

For a more involved example that plays both prerolls and midrolls, see the example directory in this project.

To manage communication between your ad integration and the video.js player, the ads plugin goes through a number of states. Here's a state diagram which shows the states of the ads plugin and how it transitions between them: 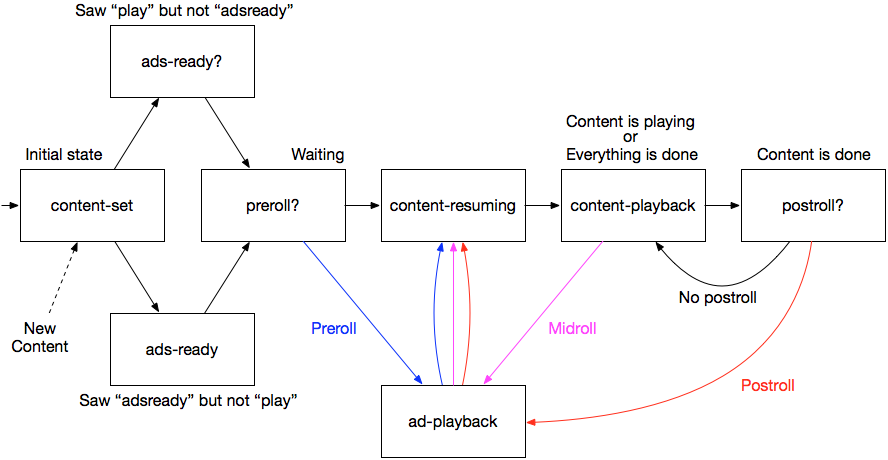 The ad framework can be configured with custom settings by providing a settings object at initialization:

The current set of options are described in detail below.

Once the ad plugin starts waiting for the adsready event, one of these things will happen:

This timeout is necessary to ensure a good viewer experience in cases where the ad implementation suffers an unexpected or irreparable error and never fires an adsready event. Without this timeout, the ads plugin would wait forever, and neither the content video nor ads would ever play.

If the ad implementation takes a long time to initialize and this timeout is too short, then the content video will beging playing before the first preroll opportunity. This has the jarring effect that the viewer would see a little content before the preroll cuts in.

During development, we found that five seconds seemed to be long enough to accommodate slow initialization in most cases, but still short enough that failures to initialize didn't look like failures of the player or content video.

Once the ad plugin fires readyforpreroll, one of these things will happen:

The prerollTimeout should be as short as possible so that the viewer does not have to wait unnecessarily if no preroll is scheduled for a video. Make this longer if your ad integration needs a long time to decide whether it has preroll inventory to play or not. Ideally, your ad integration should already know if it wants to play a preroll before the readyforpreroll event. In this case, skipLinearAdMode() should be called to resume content quickly.

The maximum amount of time to wait for an ad implementation to initiate a postroll, in milliseconds. If contentended has been fired and the ad implementation does not call startLinearAdMode() before postrollTimeout expires, the content video will end playback.

Once the ad plugin fires contentended, one of these things will happen:

The postrollTimeout should be as short as possible so that the viewer does not have to wait unnecessarily if no postroll is scheduled for a video. Make this longer if your ad integration needs a long time to decide whether it has postroll inventory to play or not. Ideally, your ad integration should already know if it wants to play a postroll before the contentended event.

Set this to true if you are using ads stitched into the content video. This is necessary for ad events to be sent correctly.

If debug is set to true, the ads plugin will output additional information about its current state during playback. This can be handy for diagnosing issues or unexpected behavior in an ad integration.

The plugin triggers a number of custom events on the player during its operation. As an ad provider, you can listen for them to trigger behavior in your implementation. They may also be useful for other plugins to track advertisement playback.

The player has entered linear ad playback mode. This event is fired directly as a consequence of calling startLinearAdMode(). This event only indicates that an ad break has begun; the start and end of individual ads must be signalled through some other mechanism.

The player has returned from linear ad playback mode. This event is fired directly as a consequence of calling startLinearAdMode(). Note that multiple ads may have played back between adstart and adend.

The player is skipping a linear ad opportunity and content-playback should resume immediately. This event is fired directly as a consequence of calling skipLinearAdMode(). It can indicate that an ad response was made but returned no linear ad content or that no ad call is going to be made at either the preroll or postroll timeout opportunities.

A timeout managed by the plugin has expired and regular video content has begun to play. Ad integrations have a fixed amount of time to inform the plugin of their intent during playback. If the ad integration is blocked by network conditions or an error, this event will fire and regular playback resumes rather than stalling the player indefinitely.

Once the plugin is initialized, there are a couple properties you can access to inspect the plugin's state and modify its behavior.

In order to detect changes to the content video, videojs-contrib-ads monitors the src attribute of the player. If you need to make a change to the src attribute during content playback that should not be interpreted as loading a new video, you can update this property with the new source you will be loading:

If you need to change the video source during ad playback, you can use disableNextSnapshotRestore to prevent videojs-contrib-ads to restore to the previous video source.

The ads plugin is designed to be built with npm.

If you don't already have npm, then download and install Node.js (which comes with npm).

With NPM ready, you can download the ads plugin's build-time dependencies and then build the ads plugin. Open a terminal to the directory where you've cloned this repository, then:

We will run a suite of unit tests and code formatting checks, then create a dist/ directory. Inside you'll find the minified ads plugin file videojs.ads.min.js, the unminified videojs.ads.js, and the CSS videojs.ads.css.

A short list of features, fixes and changes for each release is available in CHANGELOG.md.