Friendly disclaimer: This project is under active development; we cannot promise that everything will work 100%. We encourage you to try it out! Feedback and pull requests are welcome :)

The Openframe controller is the software that runs on the frame itself (i.e. the RPi), acting as a process manager for starting, stopping, and transitioning between artworks. It communicates with an Openframe API Server server via a REST API, and connects to a global event system allowing for realtime updates. The idea is to work towards a system which supports the basic goals of Openframe, guided by a handful of pilot use cases.

The block diagram below represents a proposed architecture for the Openframe platform. It will continue to evolve as development on the project progresses. 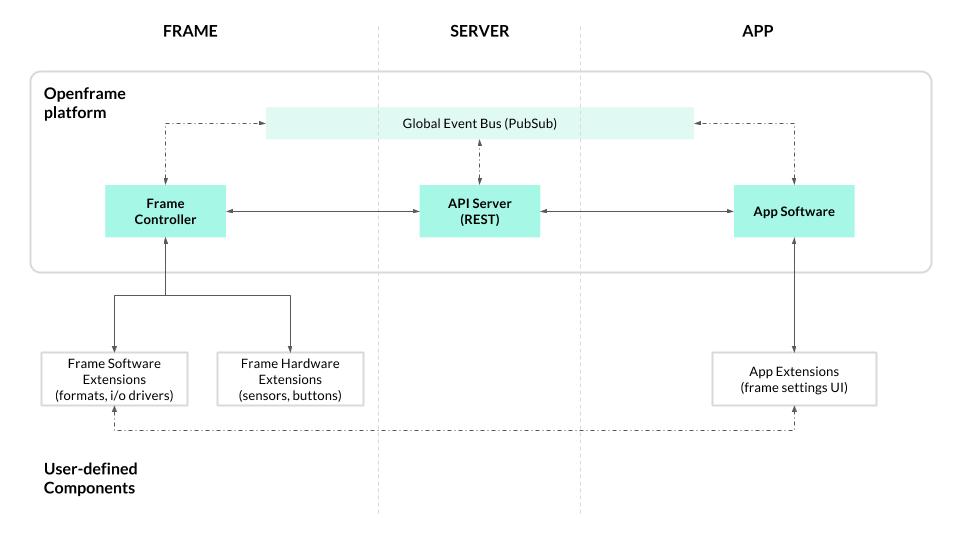 FYI: Pardon the lack of detail and documentation. We'll be updating frequently over the coming weeks / months!

If you're just trying to get a frame up and running on a Raspberry Pi, please check out the Openframe User Guide.

If you're interested in hacking on Openframe, feel free to fork/clone this repo. Run npm install to install the deps, then start up the openframe software:

Upon startup, the application will prompt you for your Openframe username and password, and a name for this frame. You can run this on a mac or linux machine (windows untested), though various artwork format extensions are likely to be developed with a specific target platform in mind.

When you run npm install, the install.sh script will be executed. This script creates a hidden directory, .openframe, in your user home folder (/home/{username}/.openframe), and copies the default .ofrcconfiguration file there. The .ofrc file contains the server settings — by default this will point to the hosted API server at openframe.io, but if you're running a local server for development or are hosting your own API server you can update the settings in .ofrc accordingly.

For more info on extensions, see the Openframe-Extension repo.