NodeMDA is a node.js library used for generating software source code for any project or language using the Model Driven Architecture approach. This approach allows you to create large portions of code for your software projects by using a UML tool to diagram software concepts.

NodeMDA is a code generation engine that uses "plugin" architecture driven by Handlebars templates, allowing you to easily modify the code generator results to fit your needs. While the NodeMDA engine and its plugins are written in Javascript and is executed by Node.js, the resulting code does NOT need to be Javascript. In fact, plugins can be created to generate artifacts for any language or software stack.

The current version of NodeMDA focuses on generating server side code from UML Class Diagrams.
From this one diagram type, NodeMDA can create virtually all of the boilerplate code to get a backend system up and running, including database creation and client service interfaces. The goal of NodeMDA is to limit the programming required after the design phase to simply filling in some blanks (i.e. the actual business logic). The design documents serve as actual source code in the project, giving you a huge head start on creating something that actually works.

The general workflow for using NodeMDA is as follows:

In order to use NodeMDA, a "reader" must exist to translate your model into NodeMDA's JSON based meta model. If one can not be found, you will need to write one. The current version of NodeMDA includes a reader for StarUML.

Code generation by NodeMDA is currently based on three key UML artifacts: Classes, Datatypes, and Stereotypes. The general strategy for creating your model is as follows:

For more details on how the above steps gets translated into code, see the "Plugins" section.

Whether or not a particular element has any affect on code generation depends entirely on the plugin being used. These elements do exist in the NodeMDA meta model, however, so if there is an effect you desire, you can always modify or add a new template.

The beauty of the MDA approach is that it puts the burden of most of the coding details on the code generator. This allows for error free performance and best of class configuration and functionality from the very beginning by leveraging knowledge capture. Ideally, plugins are written by expert developers who are experienced in a particular platform. This allows for subtle details to be captured and utilized by the code generator. If enhancements or bug fixes are required to the generated code, a simple modification to the appropriate plugins are made, and all software artifacts can be quickly regenerated.

Another advantage of the MDA approach is that the model is platform agnostic. How the model is compiled into workable code depends on your selections from NodeMDA's plugin system. Plugins can be written to generate code in any language or for any software stack.
In fact, the SAME model can be used to generate workable code in a variety of languages and stacks, allowing you to quickly test and compare a variety of platforms before deciding on which one to use.

Finally a well designed plugin system can save a tremendous amount of development time by requiring you to only model software concepts and not specific language or platform constructs. For example, by creating a single "Entity" class in your model, the code generator can create language specific objects to hold the entity data, a Data Access Object that allows you to use those other objects to interact with a backend database, and a database schema script that allows the entity to be created in the database itself.

The inspriation for NodeMDA was taken primarily from the Java based open source project AndroMDA. NodeMDA aims to improve upon that project in the following ways:

NodeMDA generates its code using "plugins". A plugin is actually just a directory on your file system that follows the NodeMDA Convention over Configuration rules, and is populated with Handlebars templates and optional Javascript files that can be used to simplify template development.

A typical NodeMDA project directory structure thus may look like this:

For every class in the model that is marked as an <<Entity>>, a Javascript file named after the the class with an extension of ".js" will be created, along with a SQL schema definition file named after the class with an extension of ".sql". To aid the Handlebars template engine in code generation, the helpers.js file will be executed, calling various methods at each phase of code generation (see the Template helper scripts section later for more details).

In a nutshell, NodeMDA passes each class that it finds in your model to every template in every stereotype directory that the class is tagged with. Classes that have no stereotypes are ignored.

After all classes have been processed, NodeMDA checks for an executes any template files that exist in the platform's root directory. These template files are for "project wide" templates, and generally don't contain any class specific content (unless that content was generated earlier during the class run and saved for this final output phase).

For example, assume you have three class files in your model:

Assuming the directory structure specified above in the Plugin Conventions section, the Data class will be passed and process by the Handlebar templates Entity/entity.js.hbs, Entity/schema.sql.hbs, and json-schema.js.hbs. These templates will be assisted by the Javascript code found in Entity/helpers.js.

Both Foo and Bar will be processed by the templates POJO/pojo.js.hbs and POJO/json-schema.js.hbs. Both templates will be assisted by the Javascript code found in POJO/helpers.js

Once these three templates have been processed, the javascript_sql/readme.txt.hbs file will be processed.

The Handlebars template engine expects a context object to exist that contains all of the data to be used the templates. NodeMDA creates this context with the following data:

Here is a simple example of a template:

It would generate code for a Person class that looks like this:

The default output behavior can be overridden on a template by template basis by specifying an output directive. The directive must be placed in the template in such a way that it will result in the first line of output starting with the ##output prefix. That is, it does not have to be the actual first line of the template, but anything that precedes it must not result in any output.

An output directive has the following format:

where outputMode is one of the following:

For example, this is an explicit declaration of the otherwise default output behavior of a .js.hbs file:

Template reuse is facilitated by Handlebars' partials system, which is Handlebars' equivalent of an "include." Template partials are automatically loaded by NodeMDA for all .hbs files that it finds in the _partials subdirectory under the platform directory. The name of the partial will be the name of the file minus the .hbs extension.

Contents of the two json-schema.js.hbs files

There is also a "global" directory located in the base plugin directory. A subdirectory named _partials also exists there and is used to autoload partials that are global to all platforms.

Handlebars allows for custom tag creation using a mechanism it calls Helpers. NodeMDA includes a facility to auto load and register Handlebars helpers by using a mechanism similar to the above _partials system. To register a helper, simply place a properly formatted .js file in the _helpers subdirectory underneath the platform directory. This file should export a function that returns a string that is the output of the helper. The name of the registered helper tag will be the name of the file (minus the .js extension).

As with _partials, helper scripts may also be registered by placing them in a _helpers subdirectory underneath the plugins/global directory.

The template engine can be enhanced by use of "support" scripts in the platform directories. These scripts can perform a variety of tasks, such as modifying or enhancing the template context, as well as decorating the NodeMDA Meta data with additional code or data that can simplify the templates themselves.

The following Javascript support file is used to demonstrate how the NodeMDA meta classes can be modified to make template authoring significantly easier. It demonstrates the user of NodeMDA's simple "mixin" system that allows you to easily add functionality to the meta model.

This file comes from a platform plugin that generates Javascript objects directly. It placed in the platfor directory of that plugin.

Note that the function in the specification is a "named function." This is critical to NodeMDA's mixin specification. Basically, the code below says "add a getter property named 'jsIdentifierNAme' to the Attribute meta model named.

With the above, any of the code templates can use a simple output format like this: 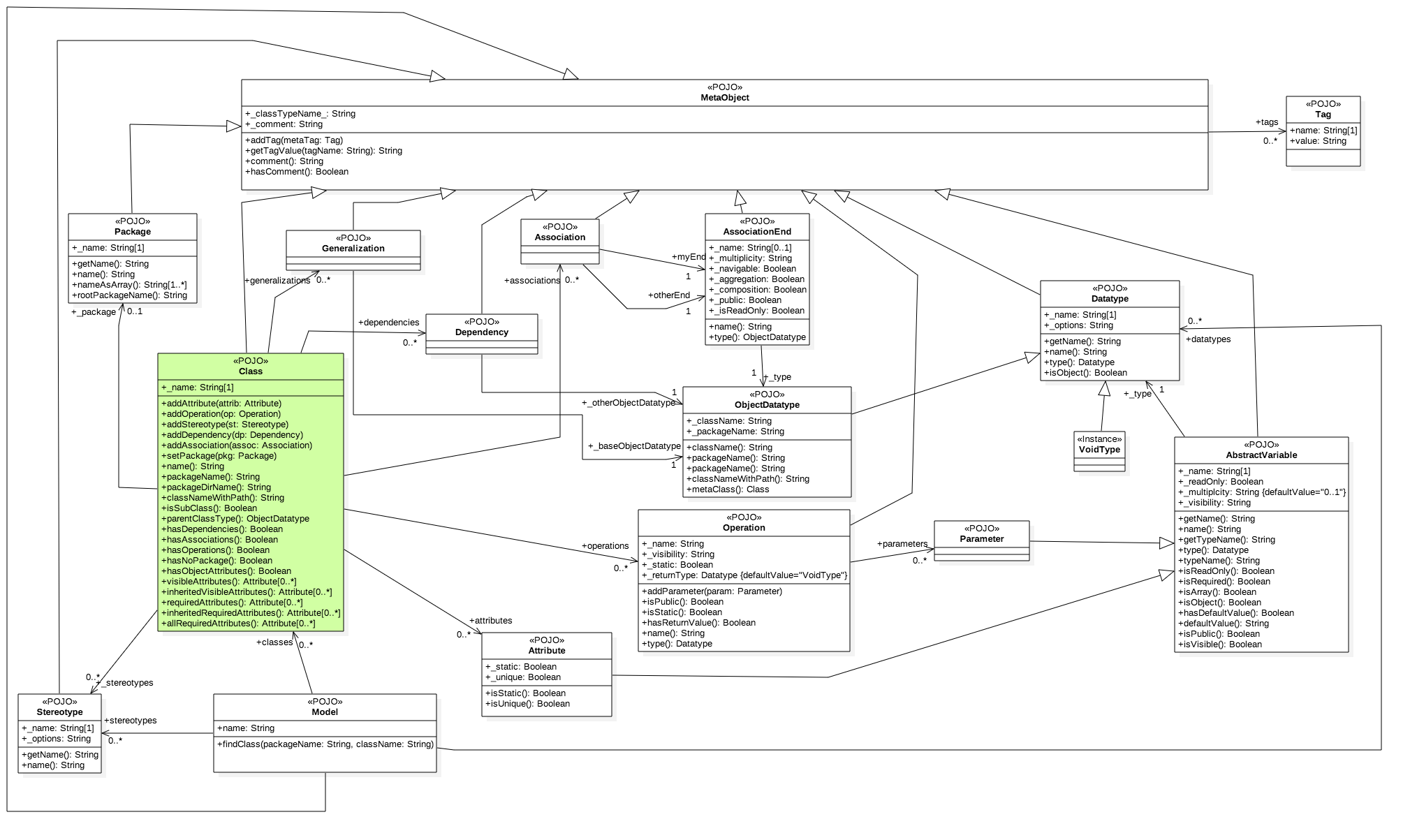