manage and generate a powerful fully organized and customizable node.js server of your choice build, generate, edit, and share your project design and flow with your team prebuilt extensions and tools to help you focus on your business idea

nodearch is a set of libraries, that help you not just getting up and running fast, but also helping to manage your application structure, environment specific configurations, prebuilt set of extensions to help you using tools and third parties out of the box, and you gotta break down your business irrelevant logic into your own defined extensions that register themselves on nodearch load flow, and of course break down your business logic code into separate plugins, and each plugin consist of a collection of components.

the image below describes it as well: 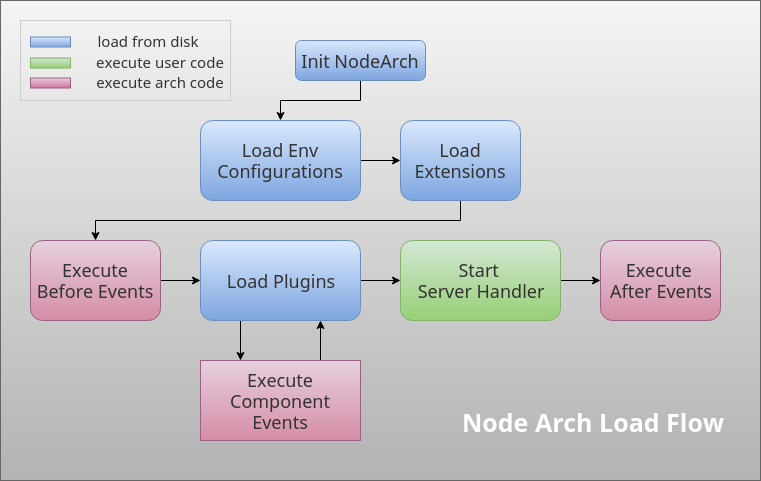 let's start by installing the NodeArch CLI tool by

now it's simple as generating a full example project by

then choose your prefered nodejs framework, press enter and the CLI tool will start preparing a new project for you, by creating your folders structure, downloading the required modules to integrate your chosen framework, and finally runs npm install for you, once all this done, you can safely go to your new project folder and run npm start or npm test

​ example: if NODE_ENV = "develpoment", then the configuration folder should contain a development folder.

Example for a before function to use mongoose to initialize database connection.

if you already wrote an extension, and you'd like to share it with us, publish it as npm module on npmjs and add nodearch-extension in the keywords list so we can find it within the nodearch cli

nodearch console does actually run your app in an interactive console Node.js Repl and exposes a global reference nodearch identical to the resulting object from const nodearch = require('nodearch'); which contains all your project dependencies, extensions...etc

this means your app will still functional and listen for incoming connections as usual the only difference is the terminal will be interactive, think of it as the Google Chrome's console, where you can interact live with your application scope while running.

nodearch console can be used from the root app directory or any sub/nested directory in your app.

running specific function in your project for testing purposes