This is a full featured Node-RED module to communicate with a Tellstick or Tellstick Duo.

This is still getting developed. Feel free to add issues, questions or feature requests.

@japikas gracefully transferred ownership of the namespace to this module (which also supports receiving data, plus much more). Are you looking for the old module? Please find it at https://github.com/japikas/node-red-contrib-tellstick. 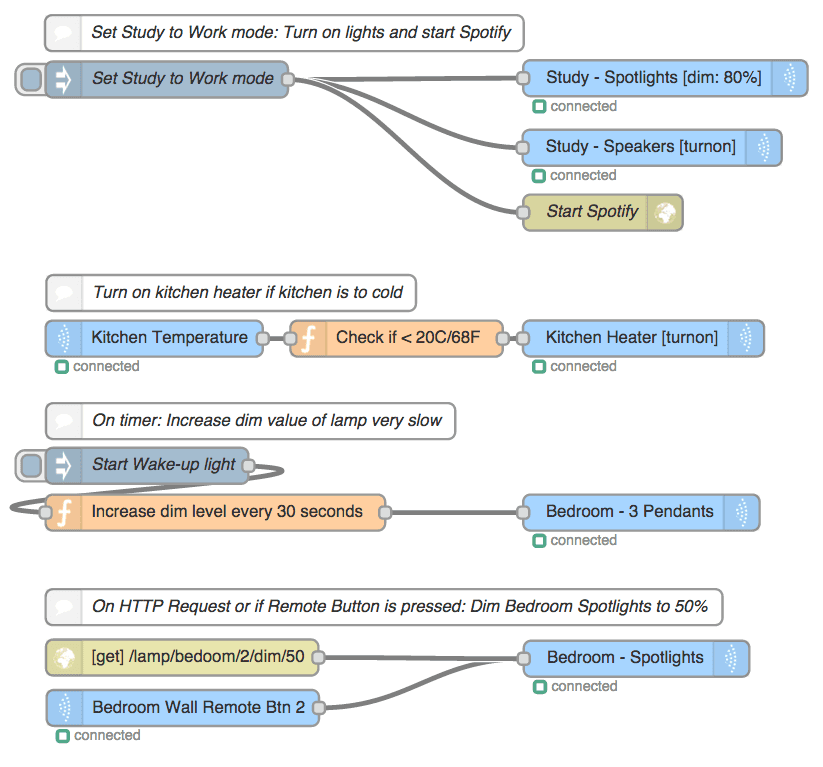 Find out if you're running Node 0.10/0.11 or a newer version. Get your current Node version by running:

Make sure you have Telldus Center installed. If you own a Telldus, you probably have this already. If not, download and install from the Telldus webpage. That's it, go to step 2 below.

Note: If you previously have installed drivers for the Tellstick, there's a possibility that you've installed telldus-core but are missing the libtelldus-core-dev which is needed for this module to work on Ubuntu/Debian/Raspbian.

Install from source by following this excellent guide from Lasse.

For some reason, the underlying telldus library does not have node-gyp as a dependency (even though it actually needs it). Therefor install by cd-ing to your Node-RED directory ($HOME/.node-red) and run these 3 commands in sequence.

Run one of these commands:

This module consist of 2 nodes, one for listening to incoming data (remotes and sensors) and one for transmitting data (e.g telling a lamp to turn off).

This module will listen to all incoming data and if that data matches the rule set in the in node, the node will be triggered and pass the complete incoming message object forward.

E.g. you can set an input node to listen to all remote which sends house=15414550 and group=0. This will fire the node on all button press' on that remote control. If you want to qualify it you may adda a unit=10 to the rule which will make it only fire on button 10. Or qualify it even more by adding the rule method=turnoff to only make it trigger on the off button (and not the on button).

You can easily make your rules by placing a Tellstick in node on your Sheet, clicking it and select "Add new tellstick-input". A dialog will open which will show all incoming data. Just press a button on the remote (or wait for your sensor to transmit a signal) and it will show up on the dialog. From there you may can the learn button which will populate the rule fields.

If you want to create an In node which passes on all incoming data, just create a config with all fields left blank (meaning: no rules).

If a in node is triggered, it will output the complete data message from the transmitter. Check the message out by wiring the input node to a debug node (set to display full message).

Example of outputted data. However, note that no transmitter sends all fields. All transmitters have fields like class and protocol but e.g. codeswitch type transmitters only transmit code and not house or unit where for a selflearning transmitter it's the opposite.

Example, pressing the first off button on a Nexa handheld remote:

The out node will send a signal telling your heater to turn off or your lamp to dim to 45%. 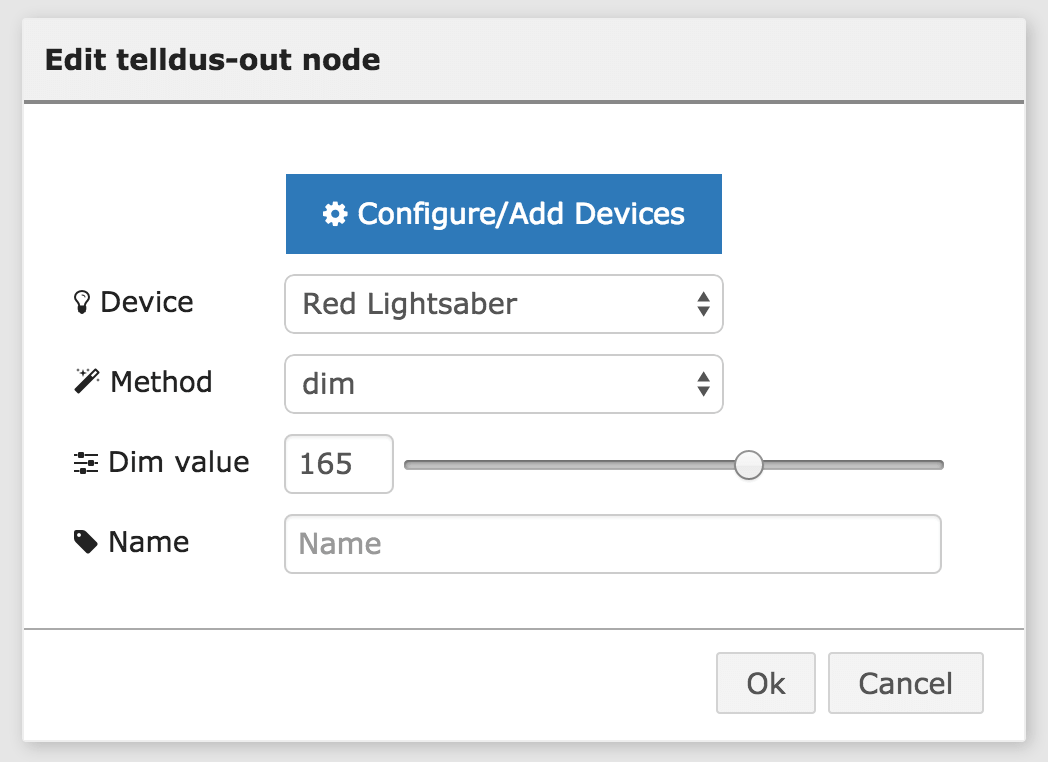 Passing data to the out node.

There are 3 ways of passing data to an out node:

The way the Tellstick works you have to configure your devices. On Windows and Mac OS X you do this in Telldus Center, on Linux you do this in /etc/tellstick.conf. However, this is a full featured module to handle Tellstick devices and you may add/update/delete devices straight from Node-RED with this module. Any changes you do from Node-RED will be saved (e.g. written to /etc/tellstick.conf).

To configure devices. Place an Out node on a Sheet, click it and click the big blue "Configure/Add devices". A new dialog will open showing all configured devices. From here you can also test your devices but turning them on/off or dimming them. Or you may send the "learn" command to them. 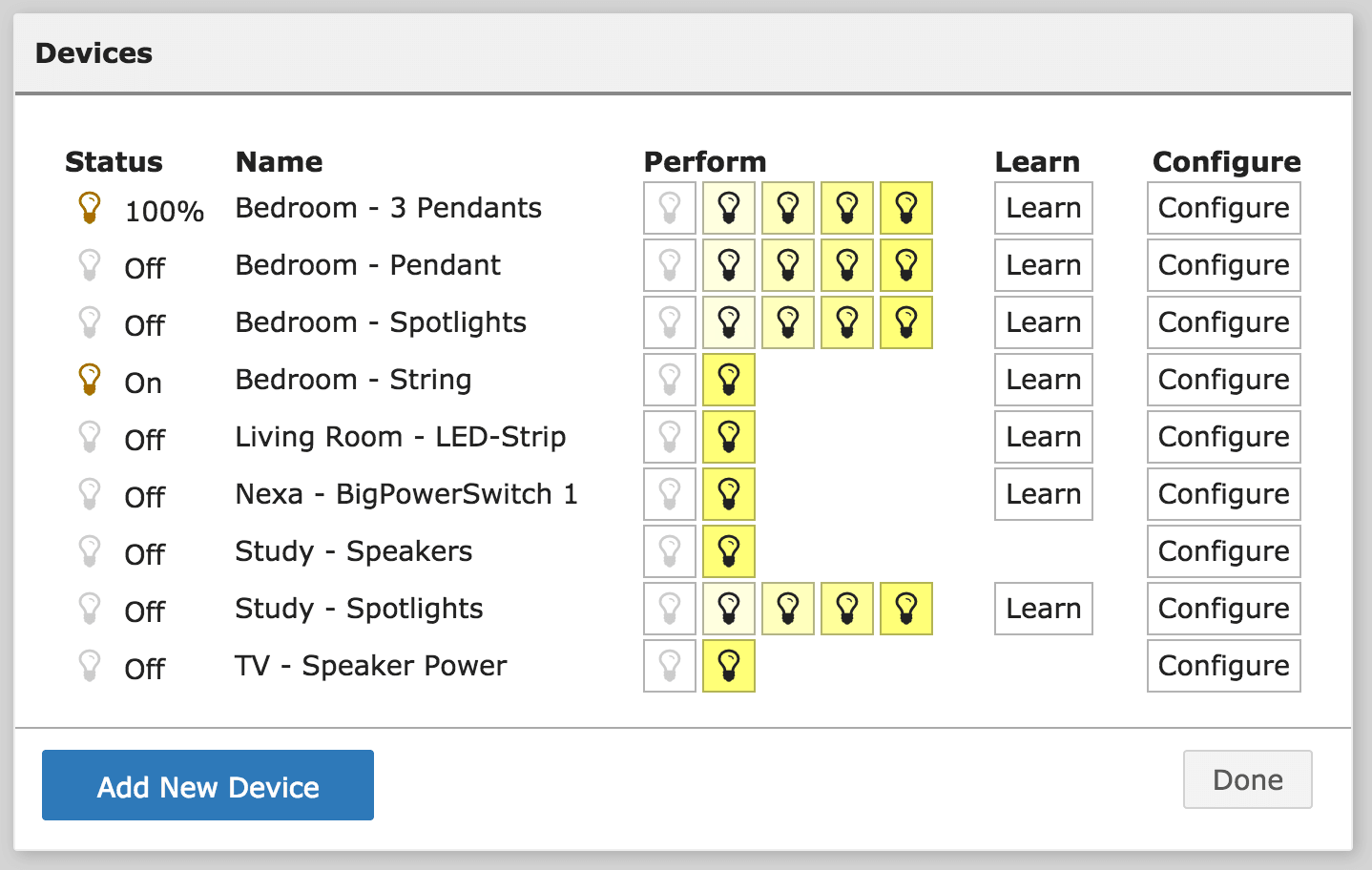 Clicking "Configure" or "Add new device" will give you a dialog to add/configure/remove a device. 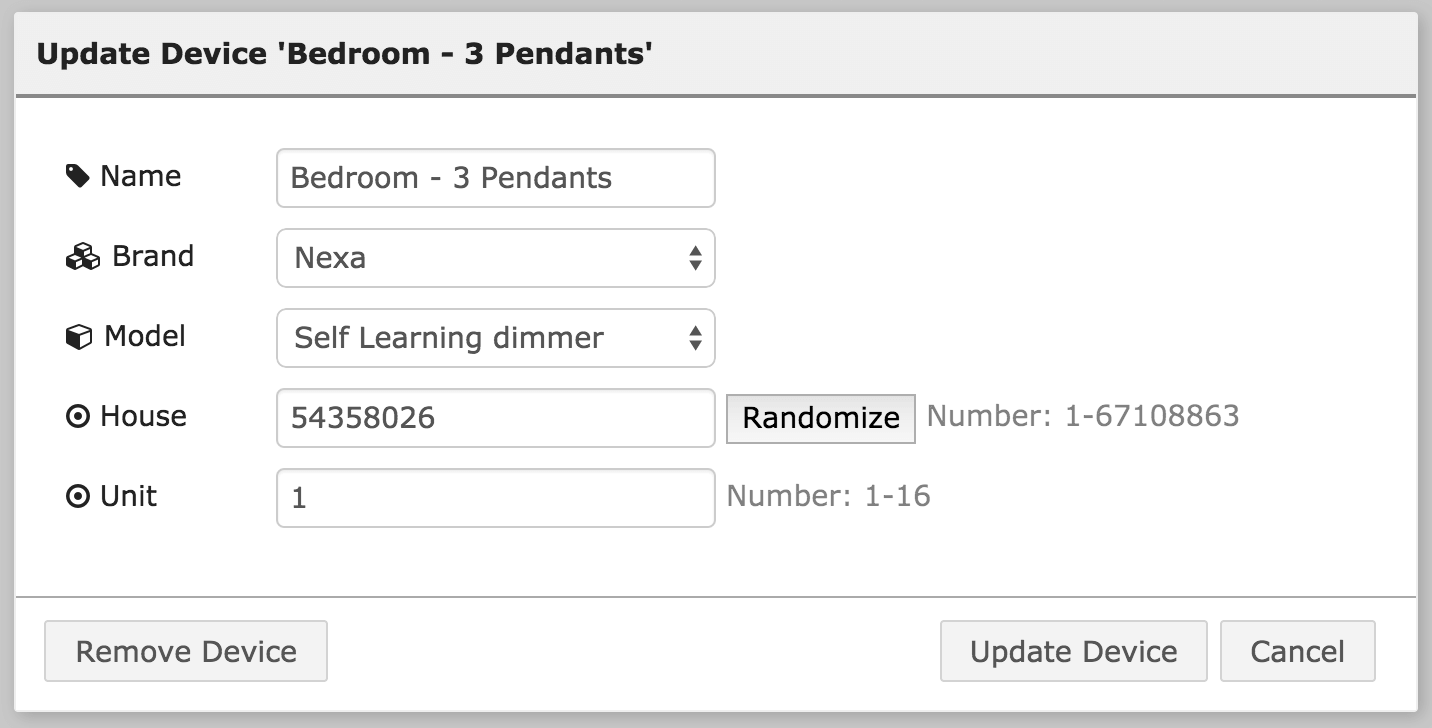 The tellstick-out node sends the same command multiple times to ensure that at least one of them reaches the receiver.

As the Tellstick just sends radio signals without any way of knowing if the transmission reched its goal, sometimes signals gets lost in space.

To mitigate this. The tellstick-out sends the same command multiple times.

By default, it sends the same command 5 times with an interval of 500 milliseconds (0.5 seconds) between each command. You can tweak these settings but editing the settings.js file in your Node-RED directory (the path to the settings file is printed in the console when you're starting Node-RED).

The new settings are:

If you have a flow as such, then set repeatSendTimes to 1. However, this should really be a corner case.

To make sure it only gets picked up once (even if all 6 of those transmissions makes it through to the Tellstick) we need "debounce" the data. If the same command gets received within a certain time frame, we treat it as one (1) command. By default this time is 500ms.

When transmitting data, the Tellstick behaves in the same way, it will send the same command about 6 times. However, this means that if we're sending two different commands, the Tellstick might start sending the second command before it's done with the first command. This makes only the first receiver pick up a clean signal and do what it's supposed to do (like turn on a lamp). The second receiver will get scrambled data and probably just ignore it.

To solve this we've to make sure the Tellstick is only sending one command at a time. The default time between 2 commands is 900ms (discovered by the nobel art of trial and error).

Unlikely but if your input nodes are getting fired twice or if a second receiver aren't getting the signal (e.g. aren't turning on) you may tweak these times but editing the settings.js file in your Node-RED directory.

The Telldus Tellstick is a small USB connected radio tranciever which plays well on Windows/Mac/Linux (Raspberry) and is used to control a wide range of 433 MHz based plugged in and built in electric switches and dimmers. Further, this module can also listen to incoming Tellstick data (or in other words: it can pick up signals from remote controls).

There are 3 different types of Tellsticks:

This modules is quite big and to make it easier to handle, the source code is is broken down into smaller files.

As per Node-RED standard, each module consist of 1 html file and 1 js file. These files lives in the /tellstick folder and gets built from the /lib folder. This is, somewhat incorrectly, named lib because it's a reserved word in the Node-RED world and Node-RED will not try to discover nodes in folders named lib. The more correct folder name would be source.

A Gulp build script is included. Run gulp build to build the html/js files. Run gulp to start gulp in developer mode and auto-build the files when the source files (in /lib) are changed.