This node can control Nuki Smart Locks with the help of Nuki Bridges. Also Nuki Bridges can be handled by the node. It uses nuki-bridge-api based on the Nuki Bridge API documentation.

How to get your hardware bridge token, which is a requirement for this node:

Do the following, to use the Nuki Web API - this is optional for this node! 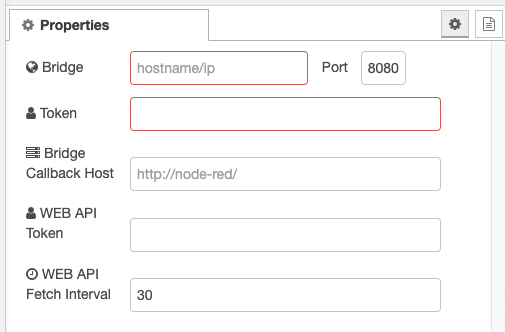 Common Control on the Nodes

Removes all registered callbacks - if this option was configured

Registers the callback for the actual node ( bridge or nuki )

Lists all registered callbacks - this is usefull if you get the error message that there are to many callbacks registered.

Send commands and queries to a Nuki Smart Lock. At the moment 2 actions are available which can be set as topic

query the lockStatus of the current lock. Possible states can be reviewd at state of nuki-bridge-api. Those are at the moment

Performs an action on the current lock. Actions are not validated within the node if they are valid - e.g. the lock is already unlocked and you send an unlock again. In this case the bridge itself manages this and does not try to unlock again. Available actions are directly mapped to the actions of nuki-bridge-api. At the moment those actions are:

Query the information available from the WebAPI - if configured. Otherwise you just get no payload in the response

Send commands and queries to a Nuki Bridge.

The nuki bridge supports various commands. At the moment the responses are directly forwarded as output payload and are not parsed. They are only enriched with the original topic and bridge information ( host and port ).

Of course this action reboots the bridge itself

Update the firmware of the nuki bridge. It is not possible right now if there is an update available!

Retrieve information about the bridge. The payload looks like following example

Retrieve the current log from the bridge. Right now only the last 100 lines are reported even the api is available to page through the available logs

Clear all logs on the bridge

At the moment the door sensor is not support within nuki-bridge-api.