A contributed Node-RED node, for retrieving data from a GPS Module via the GPSd Service Daemon.

The goal of this software is to make it easy for makers to incorporate the use of GPS modules into their IoT projects, via the awesome Node-RED Framework.

To do this, it leverages the great work of the GPSd Service Daemon. This software is relatively easy to install on a UNIX-like operating system, such as GNU/Linux (including Raspbian for Raspberry Pi), or BSD (and derivatives including macOS).

Install node-red-contrib-gpsd by following the adding nodes instructions from the Node-RED Getting Started Documentation. These instructions use npm.

Or if TL;DR, as the user running Node-RED type:

To use the node, launch or re-launch Node-RED (see running Node-RED for help getting started).

A gpsd example flow is available that highlights all the features of this node, and is illustrated below. You can copy and paste this flow into Node-RED and tinker to get a feel for how it works. 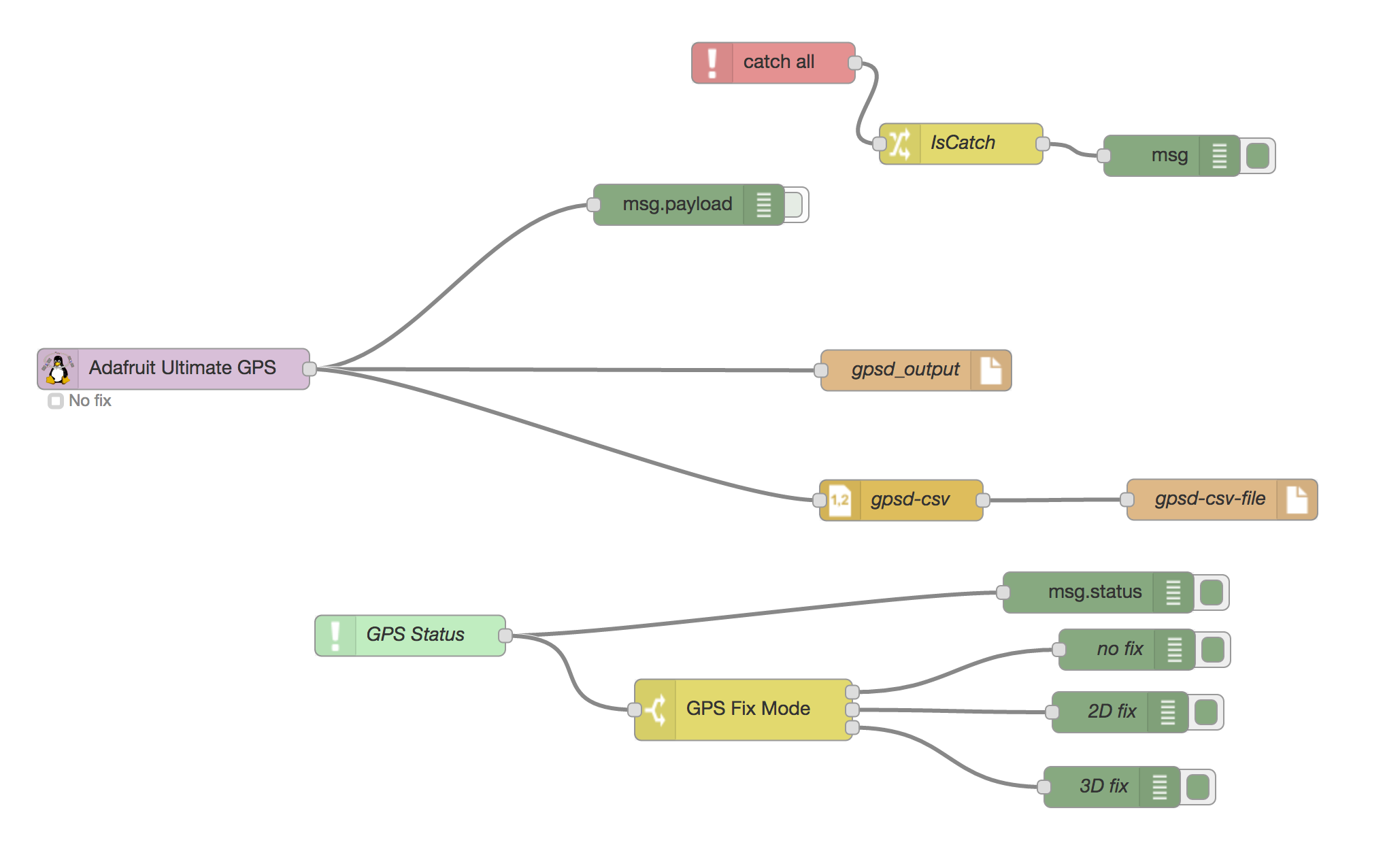 Or if you prefer, read the following explanation and screen shots.

In this accordion, you specify which Internet host and port your GPSd daemon is listening on. By default, it will use localhost and the default GPSd port 2947. If your GPSd is running on another computer, enter the hostname or IP address in the hostname field. 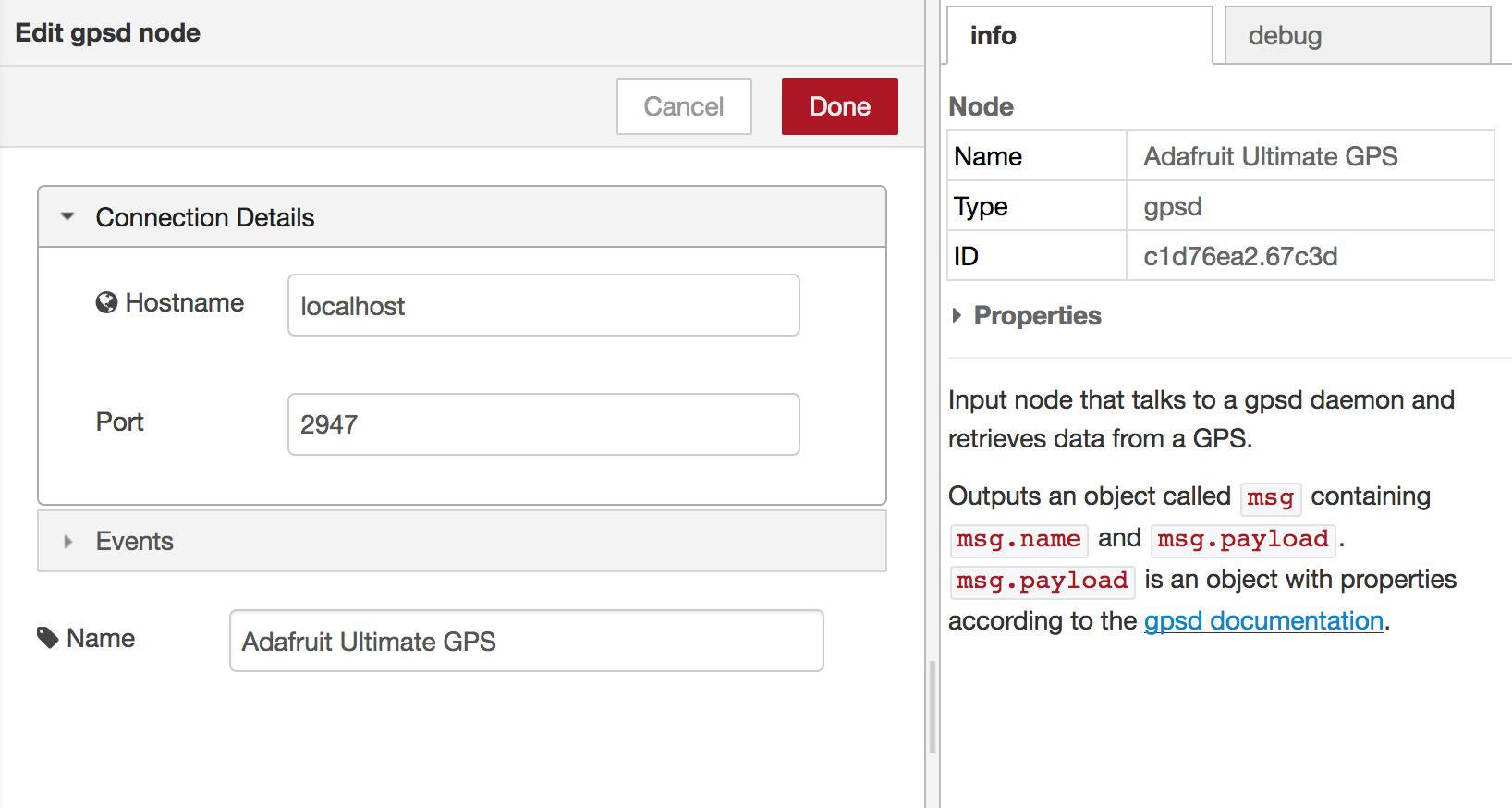 The gpsd node allows you to specify which GPS events you would like it to emit via msg.payload. These events are well documented, along with an explanation of field names and values, but again for TL;DR 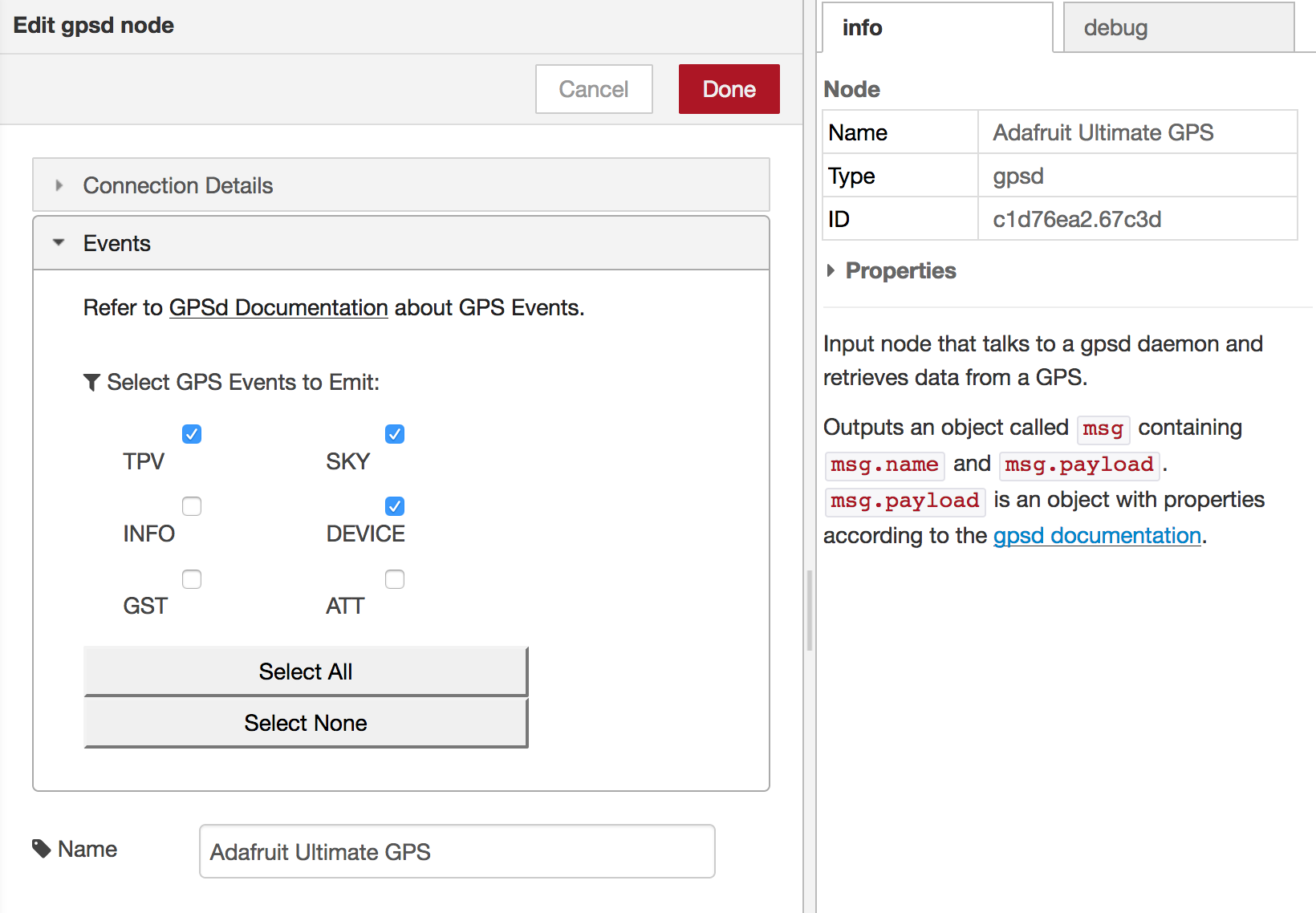 THIS SOFTWARE IS PROVIDED BY THE COPYRIGHT HOLDERS AND CONTRIBUTORS "AS IS" AND ANY EXPRESS OR IMPLIED WARRANTIES, INCLUDING, BUT NOT LIMITED TO, THE IMPLIED WARRANTIES OF MERCHANTABILITY AND FITNESS FOR A PARTICULAR PURPOSE ARE DISCLAIMED. IN NO EVENT SHALL DAMIEN CLARK BE LIABLE FOR ANY DIRECT, INDIRECT, INCIDENTAL, SPECIAL, EXEMPLARY, OR CONSEQUENTIAL DAMAGES (INCLUDING, BUT NOT LIMITED TO, PROCUREMENT OF SUBSTITUTE GOODS OR SERVICES; LOSS OF USE, DATA, OR PROFITS; OR BUSINESS INTERRUPTION) HOWEVER CAUSED AND ON ANY THEORY OF LIABILITY, WHETHER IN CONTRACT, STRICT LIABILITY, OR TORT (INCLUDING NEGLIGENCE OR OTHERWISE) ARISING IN ANY WAY OUT OF THE USE OF THIS SOFTWARE, EVEN IF ADVISED OF THE POSSIBILITY OF SUCH DAMAGE.

Like others who stand on the shoulders of giants, I'd like to acknowledge the contributions of the following people/groups without which, more directly, this modest Node-RED node would not be possible.