This package provides Node-RED nodes for controlling devices connected to Ezlo hubs via their API. It can connect to the hub locally, or through Ezlo's cloud relay (the latter is the only option available for older generation Atom and PlugHub hubs).

I try to be responsive to questions and issues, so please feel free to reach out. If you find these nodes useful, please make a donation to support my efforts! 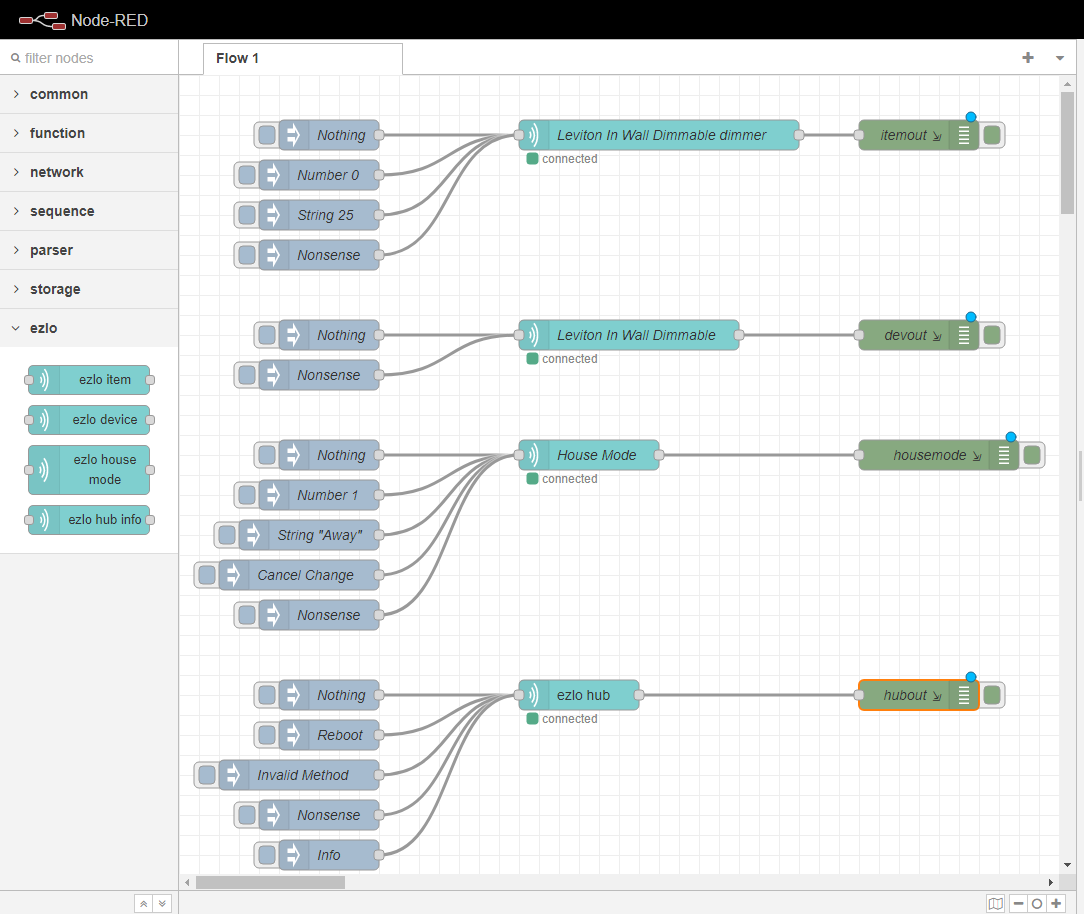 Installing or updating these nodes should be as simple as:

The ezlo item node is probably the node you will use the most. On Ezlo hubs, devices have items, and items are the containers for state on the device. For example, when a switch device is turned on, its switch item's value will go from false to true. A dimmer changing from 25% to 100% will have its dimmer item's value change from 25 to 100.

The ezlo item node will send to its output every change to the item's value reported by the hub. You can choose one of three different output formats for the payload:

Controlling a device on Ezlo hubs is most often done by setting the value of an item. For example, if we want our dimmer device to go from 100% back to 25%, we would set the device's dimmer item value to 25. So the ezlo item node will accept a value at its input, and will attempt to set that value on the item. The value must be of the type required by the Ezlo API for the item type (the node will convert strings to numbers and strings to boolean if that's required).

To set up an ezlo item node, you either need to know the item's ID, or pick it from the device and item menus. The menus will populate once the hub is selected. Choose the device, then the item, and the Item ID and Description fields will be populated automatically.

If you send no payload or an empty payload to an ezlo item node, it will echo the current value of the item (in the form chosen) at its output.

The ezlo device node maps to an Ezlo device and provides the non-state information about the device (e.g. its name, whether battery-powered, it's reachability, etc.).

The output of this node is the unfiltered, unmodified Ezlo device structure.

The input of the node will accept a no-payload (or empty payload) message and in response will send the device information to the output. Any other payload currently logs an error and produces nothing on the output.

The ezlo house mode node provides information about the current (and pending, optionally) house mode, and can change the house mode.

The output of the node can be in one of four forms (you choose one):

The input of the ezlo house mode node accepts either a numeric house mode ID or string mode name as its payload, and will initiate a change with the hub to the given mode. If the payload is an object of the form { "action": "cancel" }, the node will attempt to cancel any pending house mode change. If there no payload (or an empty payload) presented on a message to the input, the node will respond by sending the current mode to the output (in the form configured).

The ezlo hub node provides basic up/down information about the hub by sending objects to the output containing a status key with value online or offline.

At the input, if a message has no payload, the current online/offline state will be reported at the output. If the message has a payload with the key method defined, the node will send the payload to the hub as an API request; the optional params key can be included to include any required parameters as defined by the Ezlo API. It is thus possible to run pretty much any API action. The result of the action will be presented at the output in the following form:

Quick Start/TLDR: Provide the serial number of your hub, and the username and password of an Ezlo account for the hub. Also provide the hub's (stable) IP address, if it has one and you know it. Bob's your uncle.

When configuring any of the above nodes, you will need to specify the hub. This is a configuration node that represents a connection to your Ezlo hub(s). There are three ways to connect to the hub:

For cloud relay access, which is the simplest and quickest way to get started, you only need to configure the serial number and an Ezlo account username and password. It is recommended that you create an additional user account to keep Node-RED's access separate from your master Ezlo account credentials. New users can be created using their mobile app. This is generally the least desirable way to connect to the hub, however, as it is heavily dependent on the uptime of your Internet access and the Ezlo cloud services, and adds latency to every data exchange/command. Unfortunately, for older Atom and PlugHub models, this is also the only option available (and for this reason, these models are a poor choice for any serious home automation, in the author's opinion).

For authenticated local access, you need to provide the serial number, Ezlo account username and password, and the Local IP Address of the hub. Your hub must use a static IP address or DHCP reservation so that the address never changes. Although it is still necessary for the node to connect to the cloud to refresh the access token, these requests are fewer and farther between, and the local access to the API reduces latency of data and actions considerably.

For unauthenticated local access, you first need to be aware that you are removing a layer of security from your hub and allowing any device on your network to connect to it without authentication. An infected computer or device on your network could therefore access the hub and control it and every device it controls. This is a trade-off that must be made if you deem the risk of Internet-access or cloud dependency greater than the risk of unauthorized local access to your hub. To enable anonymous access, you will first need to have authenticated access either via Ezlo's cloud relay (without Local IP Address) or locally (with Local IP Address). Then, you can either set it through the Ezlo API yourself manually, or let the hub configuration node do it by setting the Offline Anonymous Access field under Options to Enable Anonymous Access. Then save and deploy. The node will reconnect to the hub, set the flag, and then reboot the hub. When the hub comes back, it will reconnect, but still using authenticated access. At this point, you can remove the username from the hub configuration node, and this is the signal to the hub configuration node to connect anonymously. You can leave the password field set in case you need it later. If you later decide to disable anonymous access and return to full authentication, all you need to do is restore the username value and set the Offline Anonymous Access option to Disable Anonymous Access.

Please report issues or questions on the Github repository for the project. Since this is my first effort for Node-RED, I'm interested in all feedback (including that of NR power-users and experienced NR node developers).

You can also find me in the Node-RED forum as @toggledbits, and I'm happy to answer questions there, but if you're reporting a bug, please do so at Github issues (linked above) to help keep me organized.

Known Issue: Ezlo hubs on recent firmware issue an error (bad parameters) when you attempt to change the house mode to the already active mode, rather than ignoring the call. This is a logged error only and produces no other output (i.e. nothing at the node's output), so it's benign. Just be aware of it if you see it in the logs.

Known Issue: Some versions of Ezlo firmware will refuse to open connections after a hub reboot for a couple of minutes. It will eventually recover, but it's an Ezlo firmware issue and there's nothing I can do about it.

My name is Patrick Rigney, and I've been an active developer in the IoT space for about 8 years, with just over 40 years in software engineering total. I'm an independent developer of integrations and tools for Vera, Ezlo, Hubitat, Home Assistant, and now Node-RED. One of my biggest independent projects of late is Reactor, a code-less automation engine for people who find even Node-RED too daunting.

Offered under the MIT License. Please see the LICENSE file.