NetsBlox is a visual programming language which allows people to develop networked programs.

Netsblox is an extension of Snap! which allows users to use some distributed systems principles and develop networked apps. That is, users can create apps that can interact with other instances of Netsblox. An introduction to the new networking features can be found here

Currently, we have support for networked events and messages where a message is like an event except contains some additional information. For example, in the Tic-Tac-Toe example, the user is able to create a "TicTacToe" message which contains the row and column that the user played in.

Along with the events and messages, we also currently support remote procedure calls. RPC's are implemented as REST endpoints on the server which can perform some of the more challenging computation for the student (allowing support to make more complicated apps) as well as providing access to extra utilities not otherwise available to the student.

For example, you can import the Map utilities service which gives the user access to Google Maps with a map of (latitude), (longitude) with zoom (zoom) block:

This results in the stage costume changing: 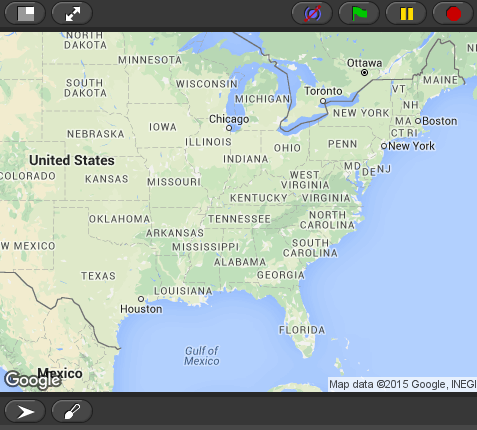 Before installing, NetsBlox requires nodejs (>= v6.0.0) and a MongoDB database. By default, NetsBlox will expect MongoDB to be running locally (this can be changed by setting the MONGO_URI environment variable).

First clone the repository and install the dependencies.

Finally, start the server with npm start and navigate to localhost:8080 in a web browser to try it out!

RPCs that are using 3rd party API's often require getting an API key from the given 3rd party API. After obtaining a key, the appropriate environment variable should be set to given key value:

To simplify this process (and to keep your ~/.bashrc clean), these values can be stored in a .env file in the project root directory and they will be loaded into the environment on starting NetsBlox.

After opening the browser, click the file button in the top left and click on Examples to check out some example networked apps!