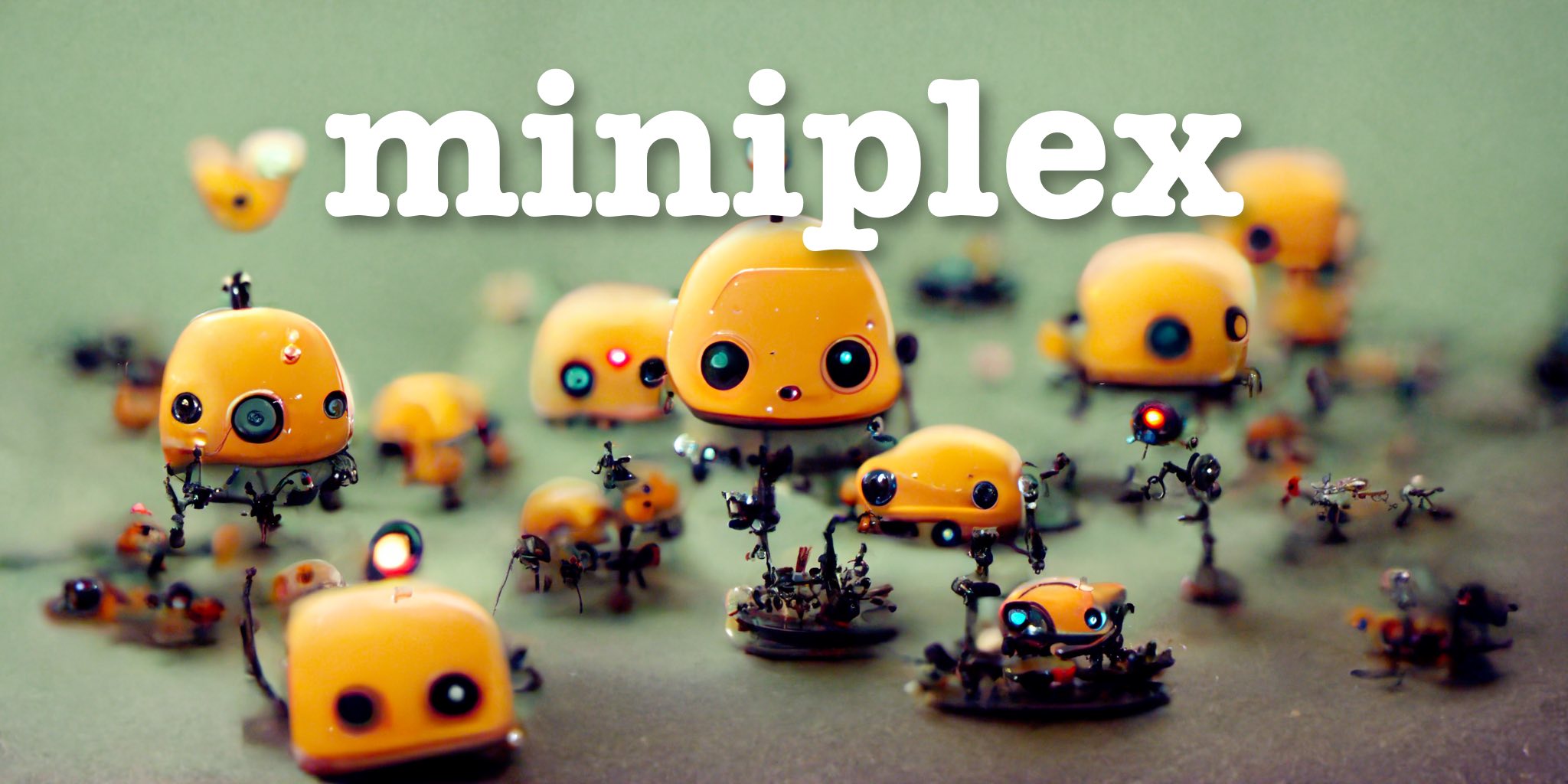 Tested @hmans' Miniplex library over the weekend and after having previously implemented an ECS for my wip browser game, I have to say Miniplex feels like the "right" way to do ECS in #r3f. - Brian Breiholz

Miniplex is an entity management system for games and similarly demanding applications. Instead of creating separate buckets for different types of entities (eg. asteroids, enemies, pickups, the player, etc.), you throw all of them into a single store, describe their properties through components, and then write code that performs updates on entities of specific types.

If you're familiar with Entity Component System architecture, this will sound familiar to you -- and rightfully so, for Miniplex is, first and foremost, a very straight-forward ECS implementation!

If you're hearing about this approach for the first time, maybe it will sound a little counter-intuitive -- but once you dive into it, you will understand how it can help you decouple concerns and keep your codebase well-structured and maintainable. This post has a nice summary:

An ECS library can essentially thought of as an API for performing a loop over a homogeneous set of entities, filtering them by some condition, and pulling out a subset of the data associated with each entity. The goal of the library is to provide a usable API for this, and to do it as fast as possible.

Main differences from other ECS libraries

If you've used other Entity Component System libraries before, here's how Miniplex is different from some of them:

Entities are just plain JavaScript objects, and components are just properties on those objects. Component data can be anything you need, from primitive values to entire class instances, or even entire reactive stores. Miniplex puts developer experience first, and the most important way it does this is by making its usage feel as natural as possible in a JavaScript setting.

Miniplex does not expect you to programmatically declare component types before using them, but if you're using TypeScript, you can provide a type describing your entities and Miniplex will provide full edit- and compile-time type hints and safety.

Miniplex does not have a built-in notion of systems

Unlike the majority of ECS libraries, Miniplex does not have any built-in notion of systems, and does not perform any of its own scheduling. This is by design; your project will likely already have an opinion on how to schedule code execution, and instead of providing its own and potentially conflicting setup, Miniplex will neatly snuggle into the one you already have.

Systems are extremely straight-forward: just write simple functions that operate on the Miniplex world, and run them in whatever fashion fits best to your project (setInterval, requestAnimationFrame, useFrame, your custom ticker implementation, and so on.)

Entity queries are performed through archetypes, with individual archetypes representing a subset of your world's entities that have a specific set of components. More complex querying capabilities may be added at a later date.

Most interactions with Miniplex are using object identity to identify entities or archetypes (instead of numerical IDs). However, entities do automatically get a built-in id component with an auto-incrementing numerical ID once they're added to the world; this is mostly meant as a convenience for situations where you need to provide a unique scalar reference (eg. as the key prop when rendering a list of entities as React components.)

Miniplex can be used in any JavaScript or TypeScript project, regardless of which extra frameworks you might be using. Integrations with frameworks like React are provided as separate packages, so here we will only talk about framework-less usage.

Specifically, if you intend to use Miniplex in a React project, please don't miss the miniplex-react documentation!

Miniplex manages entities in worlds, which act as containers for entities as well as an API for interacting with them. You can have one big world in your project, or several smaller worlds handling separate concerns.

Typing your Entities (optional, but recommended!)

If you're using TypeScript, you can define a type that describes your entities and provide it to the World constructor to get full type support in all interactions with it:

The main interactions with a Miniplex world are creating and destroying entities, and adding or removing components from these entities.

Let's create an entity. Note how we're immediately giving it a position component:

Now let's add a velocity component to the entity. Note that we're passing the entity itself, not just its identifier:

Now the entity has two components: position and velocity.

Note Once added to the world, entities also automatically receive an internal __miniplex component. This component contains data that helps Miniplex track the entity's lifecycle, and optimize a lot of interactions with the world, and you can safely ignore it.

We're going to write some code that moves entities according to their velocity. You will typically implement this as something called a system, which, in Miniplex, are typically just normal functions that fetch the entities they are interested in, and then perform some operation on them.

Fetching only the entities that a system is interested in is the most important part in all this, and it is done through something called archetypes that can be thought of as something akin to database indices.

Since we're going to move entities, we're interested in entities that have both the position and velocity components, so let's create an archetype for that:

Now we can implement our system, which is really just a function -- or any other piece of code -- that uses the archetype to fetch the associated entities and then iterates over them:

Note: Since entities are just plain JavaScript objects, they can easily be destructured into their components, like we're doing above.

At some point we may want to remove an entity from the world (for example, an enemy spaceship that got destroyed by the player):

This will immediately remove the entity from the Miniplex world and all associated archetypes.

All functions that modify the world (createEntity, destroyEntity, addComponent and removeComponent) also provide an alternative function that will not perform the action immediately, but instead put it into a queue:

Once you're ready to execute the queued operations, you can flush the queue likes this:

Note: Please remember that the queue is not flushed automatically, and doing this is left to you. You might, for example, do this in your game's main loop, after all systems have finished executing.

Do not add or remove entity properties directly

Since entities are just normal objects, you might be tempted to just add new properties to (or delete properties from) them directly. This is a bad idea because it will skip the indexing step needed to make sure the entity is listed in the correct archetypes. Please always go through addComponent and removeComponent!

Be careful when deleting entities from within a system

If your system code will under some circumstances remove entities (without queueing the deletion), it is recommended to iterate over the entities in reverse order, like this:

This is because the destroyEntity function will remove the entity from the archetype's entity list, and if you're iterating over the list in normal order, you will end up skipping the next entity in the list.

createEntity and addComponent accept plain Javascript objects, opening the door to some nice patterns for making entities and components nicely composable. For example, you could create a set of functions acting as component factories, like this:

Miniplex offers the extendEntity function to add multiple components to an entity in one go, and you can make use of your factory components here:

If you're using Typescript, you may even add some per-component types on top like in the following example:

Prefer for over forEach

This will incur a modest, but noticeable performance penalty, since you would be calling and returning from a function for every entity in the archetype. If performance is a concern, it is recommended to use either a for/of loop:

Or a classic for loop with numerical index access:

The archetype function aims to be idempotent and will reuse existing archetypes for the same queries passed to it, so you will never risk accidentally creating multiple indices of the same archetypes. It is, however, a comparatively heavyweight function, and you are advised to, wherever possible, reuse previously created archetypes.

For example, creating your archetypes within a system function like this will work, but unnecessarily create additional overhead, and is thus not recommended:

Instead, create the archetype outside of your system: