calculates the circumference of a circle

Note that we reference the variable PI below that is defined in the code block at the top of this describe (so right under "Mathematics").

The file you are currently reading has a markdown structure (which includes the main header above and the other parts below) that is parsed into a tree:

Which is then uses the Jasmine describe, it and beforeEach to setup the tests and then run them. 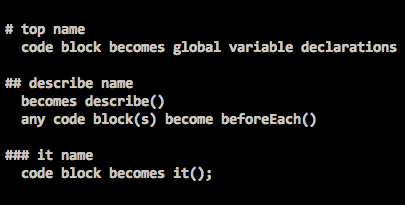 (If you're working on this project, run ./bin/literate-jasmine instead.)

Take a close look at how scope works for globals. In the Mathematics section below, we reference PI to reset it as a beforeEach so every test has PI reset to the correct value. The actual declaration of PI as a variable happens on the fourth line of this README. The root describe treats any code blocks after it as global setup.