Jupyter Boxes is a framework that allows a user to create a drag and drop workflow utilizing Jupyter notebook cells. The framework is build on top of React Flow. A user will add comments to the beginning of a cell that will tell the framework how to convert it into a usable block. The framwork is composed a back-end/front-end (port 9494). The backend deployed contains the code for the frontend and the parsing code for the backend. File watcher looks at the notebook directory to put new notebooks to be processed automatically. Once processed, the notebook is not looked at again (unless db reset). The processed information get stored into a file called db.json. This file contians all the blocks to display. 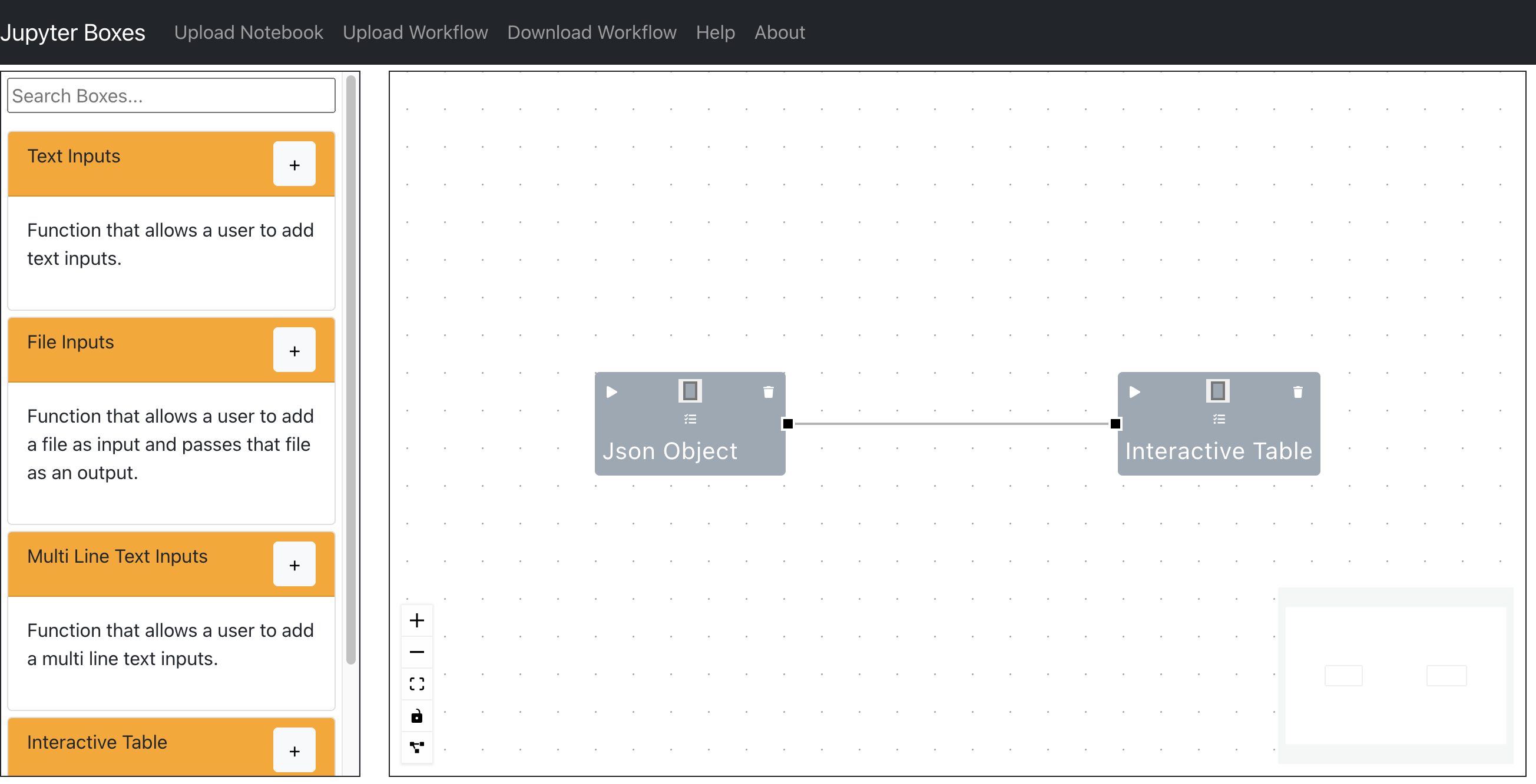 Getting Started with Jupyter Boxes

Once installed, the library will contain a set of commands that can be run from the terminal. Those are the following:

This command will build the python virtualenv for the backend to work. Will install all required libraries into a directory containing the vierual environment called jbox_venv.

This command will reset the backend "database" containing the notebooks that have been parsed. This will take any notebooks in the parsed directory and return them to be parsed again. It also restarts the db.json "database" file.

This command will start the whole framework. This includes the backend, frontend, and cron schedule. There are two optional parameters, one for setting the backend-port and the second to allow logs to be created for the cron job. This file could be big so take into consideration. To run on the background add the & at the end.

If you only want to run the backend for serving the db and front-end without having to start the cron again.

The command will start the cron job that runs every minute to parse the jupyter notebooks. To run on the background add the & at the end.

How to convert the notebook to be used in JBox

As said before, to get a notebook used into JBox you need to add comments into the cells you want to convert. There are 2 functions that are used, one for converting and the second one for installing needed packages for the notebook. Every comment used will start the following way (remmeber the space between the # and jbox):

In order to have the packages the notebooks need you can run the following line at the top of a cell. This is normally done at the first cell on the beginning of the notebook.

You can have multiple libary names separated by commas.

Converting a cell into a block.

Cell with no inputs and outputs

The most generic cell, with no inputs, outputs or a defined function.

Cell with inputs and outputs

In this case you will have a cell with variables been used on the code that can be used as inputs and also variables that will be used as an output.

In this example the inputs are a and b and the output will be the c.

In this case we are using a function that is already created and it already has a return. This one also has a pydoc used for the description of the block.