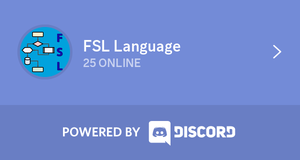 Wouldn't it be nice if your TypeScript and Javascript state machines were simple and readable one-liners?


Wouldn't it be great if they were easy to work with?


What if the notation supported action names easily?


What if integration with the outside was straightforward?


What if the machine followed JS standards, and distinguished refusals as false from mistakes as thrown?


What if there were easy convenience notations for lists, and for designating main-path => vs available path -> vs only-when-forced ~> ?


What if that were easy to render visually?

What if that were easy to render visually, with styling, in PNG, JPEG, or SVG?

What if the machine was lighting fast, able to do tens of millions of transitions per second?

But, above all else:

What if it was easy?

And, with the right language, state machines can be easy and fun.

The NPM package includes pure es6, a cjs es5 bundle, and .d.ts typings. The repository includes the original typescript, the bundle, the es6, documentation, tests, tutorials, and so on.

Specify finite state machines with a brief syntax. Run them; they're fast. Make mistakes; they're strict. Derive charts. Save and load states, and histories. Make machine factories to churn out dozens or thousands of instances. Impress friends and loved ones. Cure corns and callouses.

This will produce the following FSM (graphed with jssm-viz): 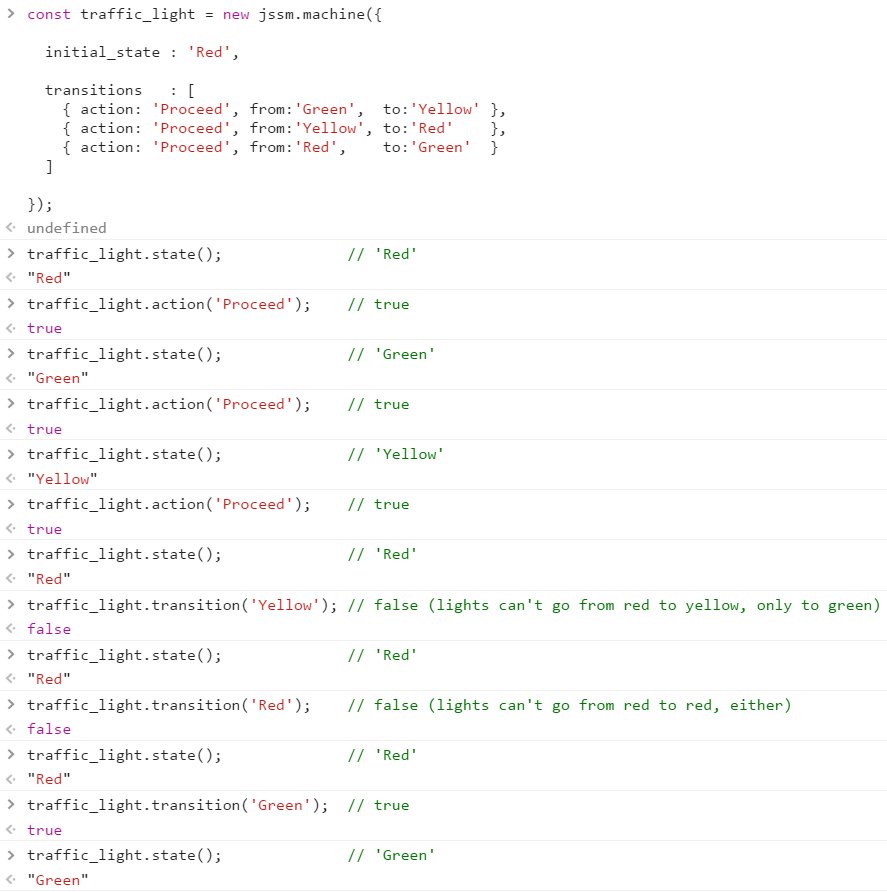 As usual, a valid question.

So, to look at the same traffic light as above, you'll notice some things.

Along with other common sense things, a good state machine implementation can help eliminate large classes of error in software. State machines are often applied when the stakes on having things correct are high.

Feature parity, especially around the DSL and data control.

Data integrity. JSSM allows a much stricter form of state machine than is common, with a relatively low performance and storage overhead. It also offers an extremely terse domain specific language (though it does not require said DSL) to produce state machines in otherwise comparatively tiny and easily read code.

A state machine in JSSM is defined in one of two ways: through the DSL, or through a datastructure.

So yeah, let's start by getting some terminology out of the way, and then we can go right back to that impenetrable sentence, so that it'll make sense.

Finite state machines have been around forever, are used by everyone, and are hugely important. As a result, the terminology is a mess, is in conflict, and is very poorly chosen, in accordince with everything-is-horrible law.

This section describes the terminology as used by this library. The author has done his best to choose a terminology that matches common use and will be familiar to most. Conflicts are explained in the following section, to keep this simple.

There's other stuff, of course, but these five are enough to wrap your head around finite state machines.

This is a trivial traffic light FSM, with three states, three transitions, and one action:

Those six ideas in hand - FSMs, states, machines, current state, transitions, and actions - and you're ready to move forwards.

One other quick definition - a DSL, or domain specific language, is when someone makes a language and embeds it into a different language, for the purpose of attacking a specific job. When React uses a precompiler to embed stuff that looks like HTML in Javascript, that's a DSL.

This library implements a simple language for defining finite state machines inside of strings. For example, this DSL defines that 'a -> b;' actually means "create two states, create a transition between them, assign the first as the initial state", et cetera. That micro-language is the DSL that we'll be referring to a lot, coming up. This DSL's parser's original name was jssm-dot, because it's a descendant-in-spirit of an older flowcharting language DOT, from graphviz, which is also used to make the visualizations in jssm-viz by way of viz-js.

Enough history lesson. On with the tooling.


And now, that Quick Start we were talking about

So let's put together a trivial four-state traffic light: the three colors, plus Off. This will give us an opportunity to go over the basic facilities in the language.

At any time, you can take the code and put it into the graph explorer for an opportunity to mess with the code as you see fit.


0: Lights always have an off state

Our light will start in the Off state, with the ability to switch to the Red state.

We will give that transition an action, and call it TurnOn.

So far, our machine is simple:

1: Traffic lights have a three-color cycle

The main path of a traffic light is cycling from Green to Yellow, then to Red, then back again. Because this is the main path, we'll mark these steps => main transitions.

We will give those all the same action name, Proceed, indicating "next color" without needing to know what we're currently on.

2: Traffic lights can be shut down

We'd also like to be able to turn this light back off. Because that's expected to be a rarity, we'll require that it be a ~> forced transition.

But that takes a lot of space even with this short list, so, instead we'll use the array notation

And we'd like those all to have the action TurnOff, so

Machine's still not too bad:

Let's actually use the traffic light

That's actually the bulk of the language. There are other little add-ons here and there, but, primarily you now know how to write a state machine.

Let's load it and use it!


An introduction to machine design

Let's make a state machine for ATMs. In the process, we will use a lot of core concepts of finite state machines and of fsl, this library's DSL.

We're going to improve on this NCSU ATM diagram that I found:

Remember, at any time, you can take the code and put it into the graph explorer for an opportunity to mess with the code as you see fit.

We'll start with an empty machine.

1: Should be able to eject cards

We'll add the ability to physically eject the user's card and reset to the empty and waiting state. Right now it'll dangle around un-used at the top, but later it'll become useful. 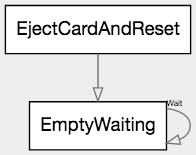 2: Should be able to insert cards

We'll add the ability to physically insert a card, next. You know, the, uh, thing ATMs are pretty much for.

Notice that the new state, HasCardNoAuth, has been rendered red. This is because it is terminal - there is no exit from this node currently. (EmptyAndWaiting did not render that way because it had a transition to itself.) That will change as we go back to adding more nodes. terminal nodes are usually either mistakes or the last single state of a given FSM. 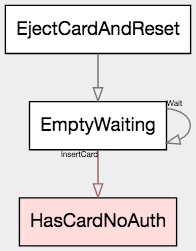 3: Should be able to cancel and recover the card

Next, we should have a cancel, because the ATM's 7 key is broken, and we need our card back. Cancel will exit to the main menu, and return our card credential. 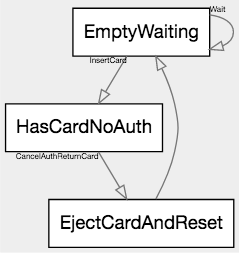 4: Can give the wrong PIN

Next, let's give the ability to get the password ... wrong. Because we all know that one ATM that only has the wrong-PIN path, so, apparently that's a product to someone.

When they get the PIN wrong, they're prompted to try again (or to cancel.) 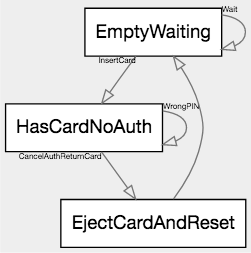 5: Can give the correct PIN

Next, let's give the ability to get the password right.

The second, from our new state MainMenu, gives people the ability to leave: MainMenu 'ExitReturnCard' -> EjectCardAndReset; 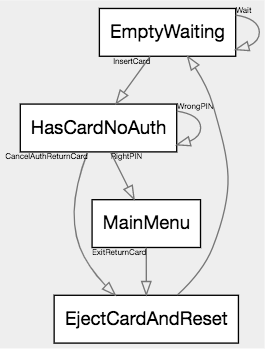 6: Can check balance from main menu

Let's add the ability to check your balance. First pick that from the main menu, then pick which account to see the balance of, then you're shown a screen with the information you requested; then go back to the main menu. 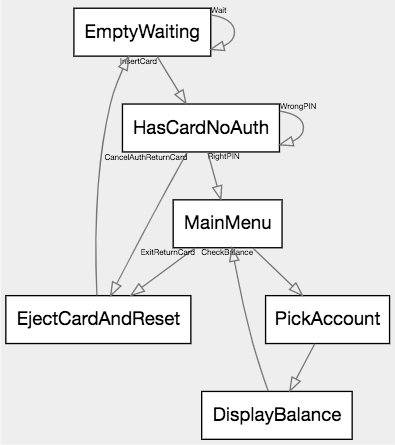 7: Can deposit money from main menu

Let's add something difficult. Their state machine just proceeds assuming everything is okay.

Writing this out in code is not only generally longer than the text form, but also error prone and hard to maintain.

... or there's the FSM DSL, which is usually as-brief-as the text, and frequently both briefer and more explicit.

Which leaves us with the total code 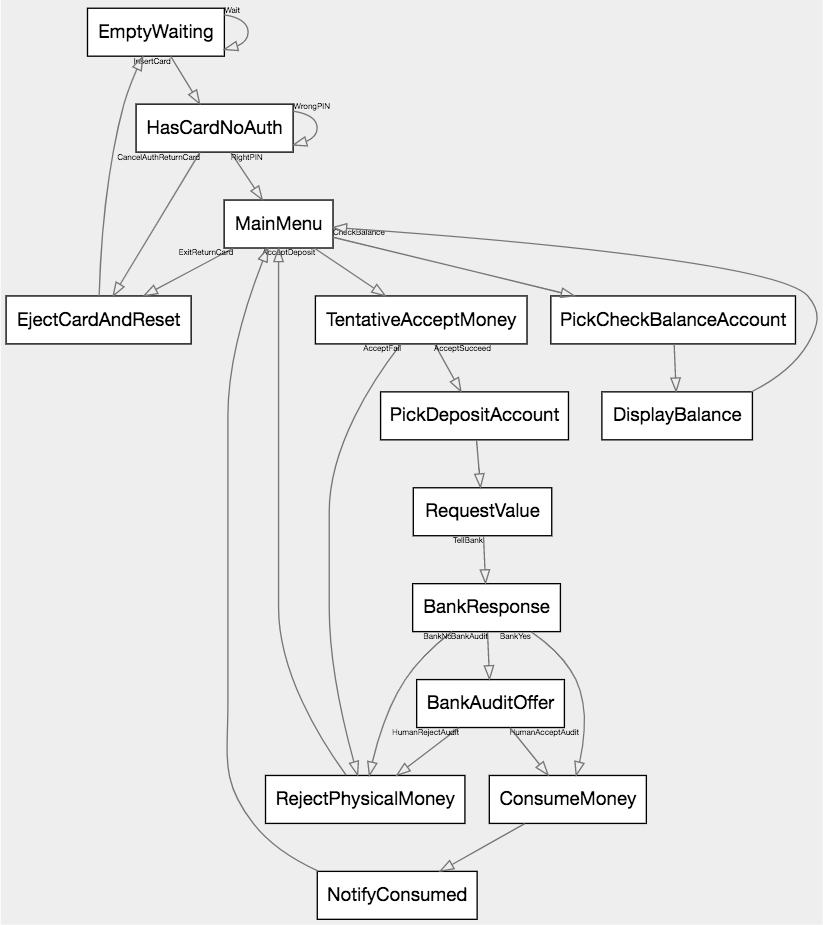 8: Can withdraw money from main menu

Let's also be able to take money from the machine. After this, we'll move on, since our example is pretty squarely made by now.

Or as a whole, we're adding

Which leaves us with 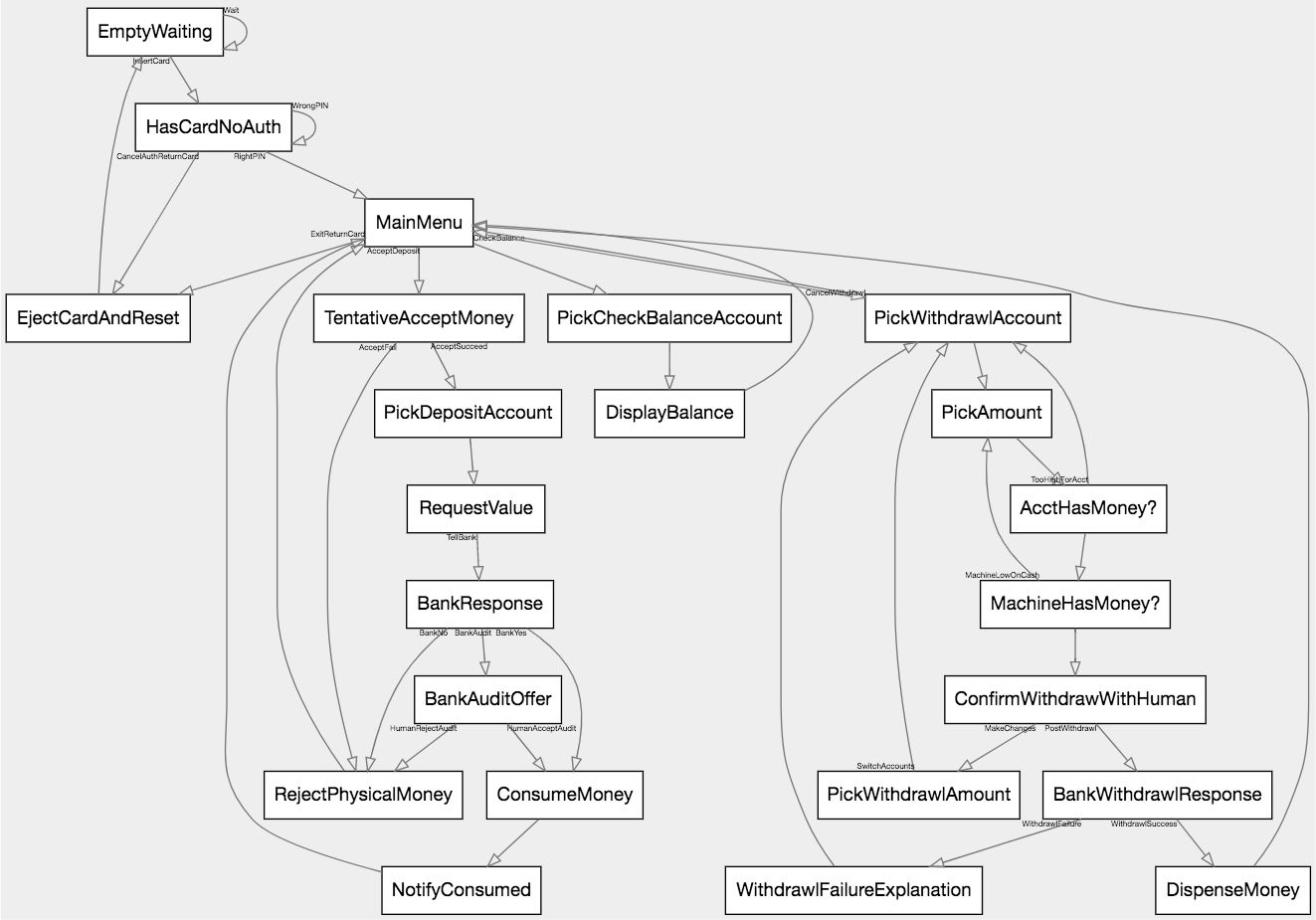 As you can see, building up even very complex state machines is actually relatively straightforward, in a short amount of time.

All the styling bullshit

The 9 or whatever directives

How to publish a machine

How to think in state machines

It's really quite simple.

Once done, your work should show up here.

Their notations, one by one

There are a lot of state machine impls for JS, many quite a bit more mature than this one. Here are some options:

And some similar stuff:

JSSM and FSL have had a lot of help.

If I've overlooked you, please let me know.

The biggest thanks must go to Michael Morgan, who has debated significant sections of the notation, invented several concepts and operators, helped with the parser, with system nomenclature, for having published the first not-by-me FSL machine, for encouragement, and generally just for having been as interested as he has been.