An environment for interactive authoring and executing JavaScript code using a notebook metaphor, built on top of IPython.

An ijs notebook is powered by a javascript kernel written in node.js (and replaces the standard python kernel). A kernel runs behind the scenes and executes the code you write in notebooks. The notebook displays the outputs generated by your code.

You can use node.js APIs, as well as the large library of node.js modules in your notebooks. You can also author client-side HTML and JavaScript to run code within the browser. JavaScript is truly universal! 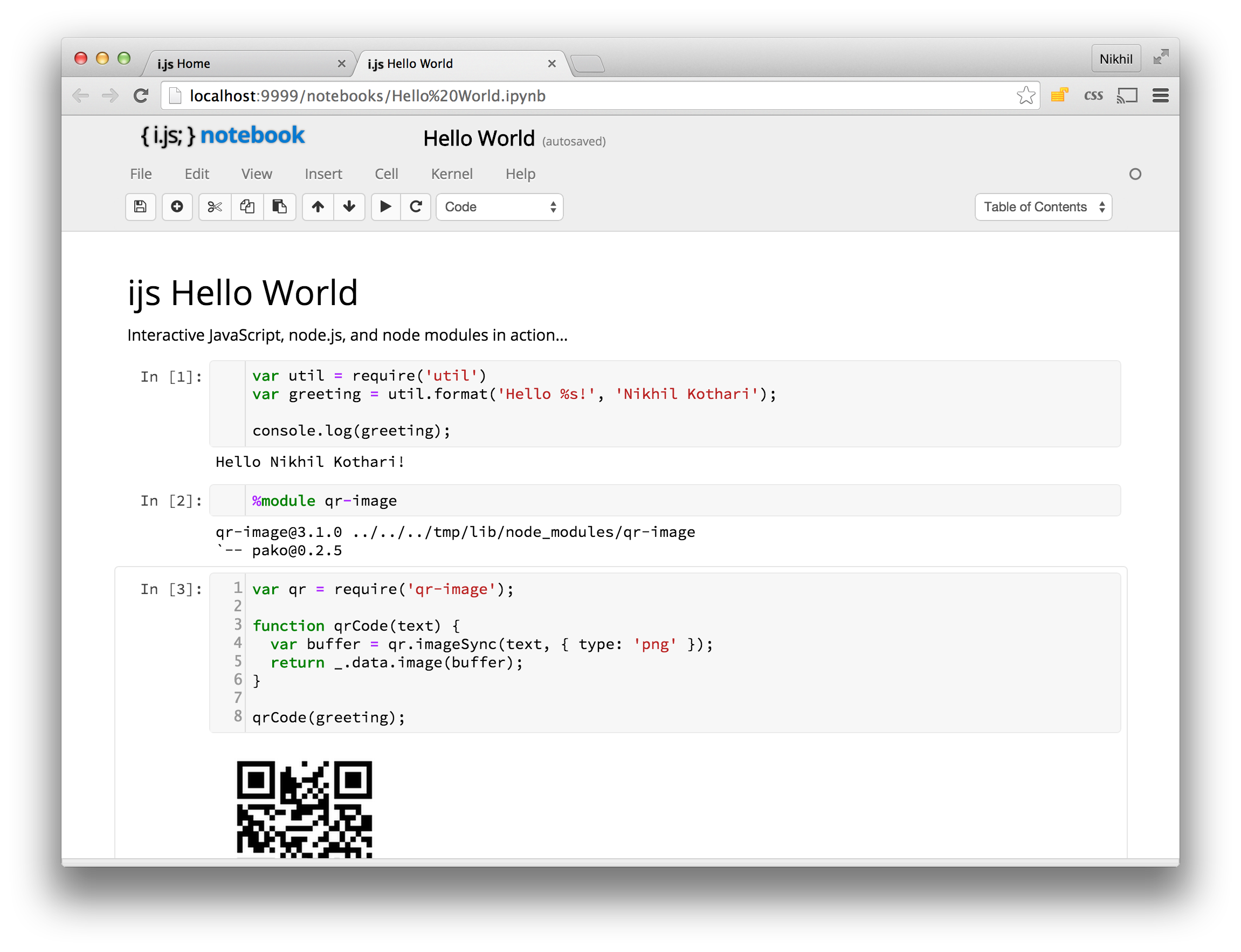 You can use ijs by installing it as a node module, or via a pre-packaged docker container.

You can install the ijs node module globally and start the notebook environment using the ijs command.

The tool will create a notebooks directory within the specified working directory.

Note: If you don't already have node.js and IPython installed, you'll need to do so first. Unfortunately setting these up can be a bit involved. This page might help: http://ipython.org/install.html ... as of right now ijs requires IPython v2.4.1. Support for 3.x is coming.

This avoids the need to go through the steps of getting a local setup. As long as you've got a working docker setup (using boot2docker on a mac), you're good to go. Just issue the following commands:

And then browse to http://localhost:9999 and you're on your way.

Lots of node.js APIs are async, and you can write async code in notebook cells too! 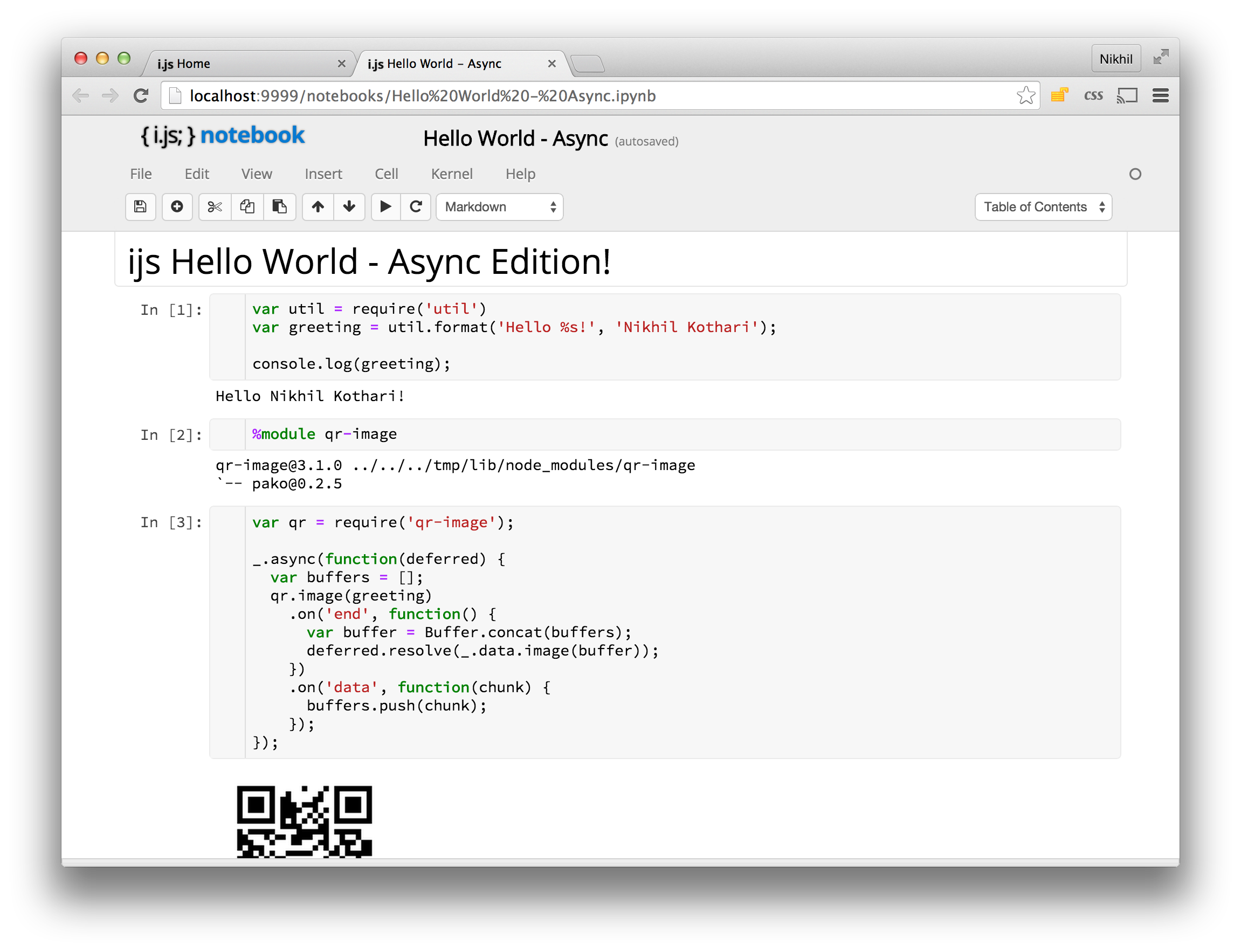 JSON is everywhere, and you can use a %%json cell to easily declare JSON data. The notebook provides auto-complete functionality which extends to this JSON data. 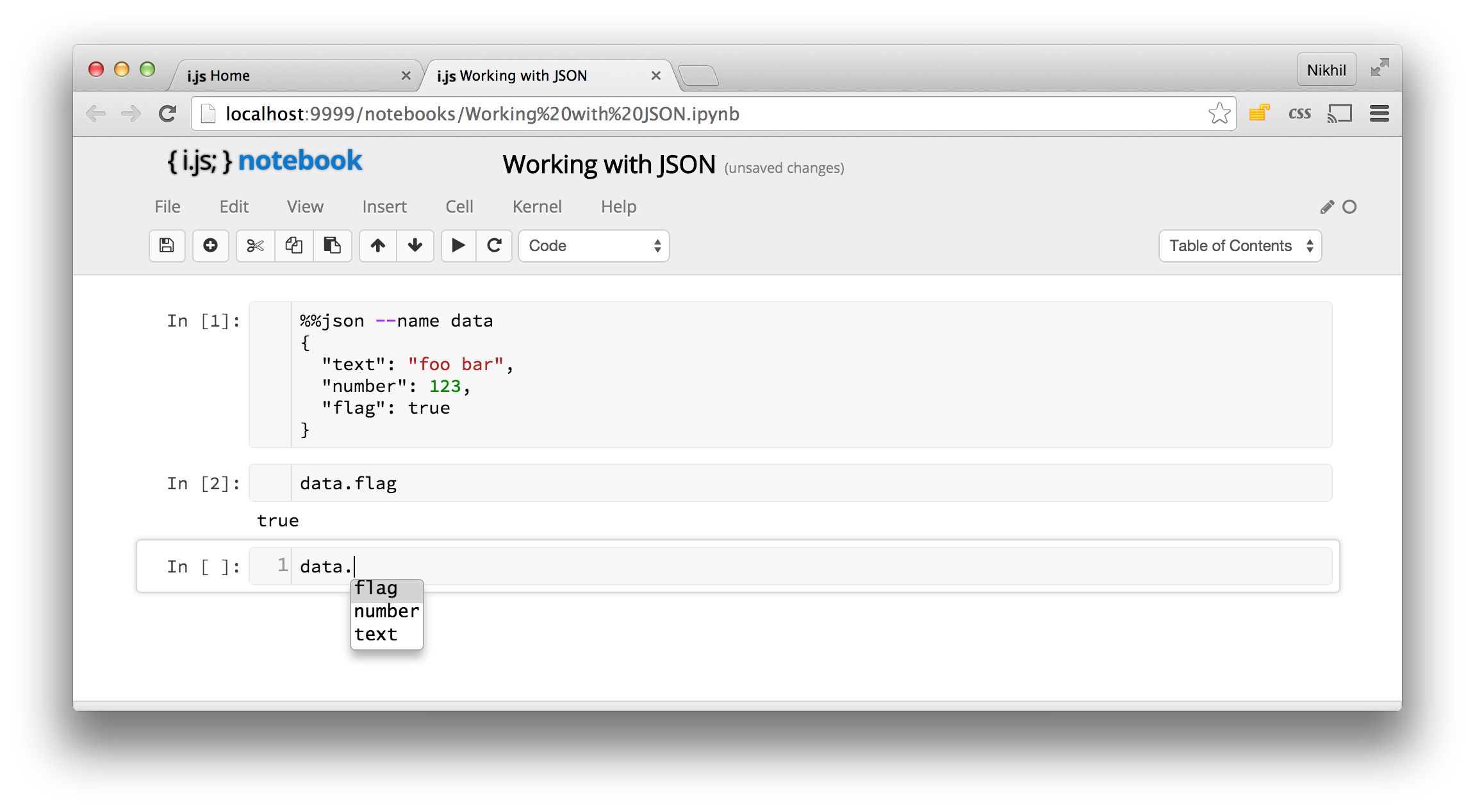 You can use the notebook interface to experiment with HTTP APIs using the HTTP client provided by request node module. 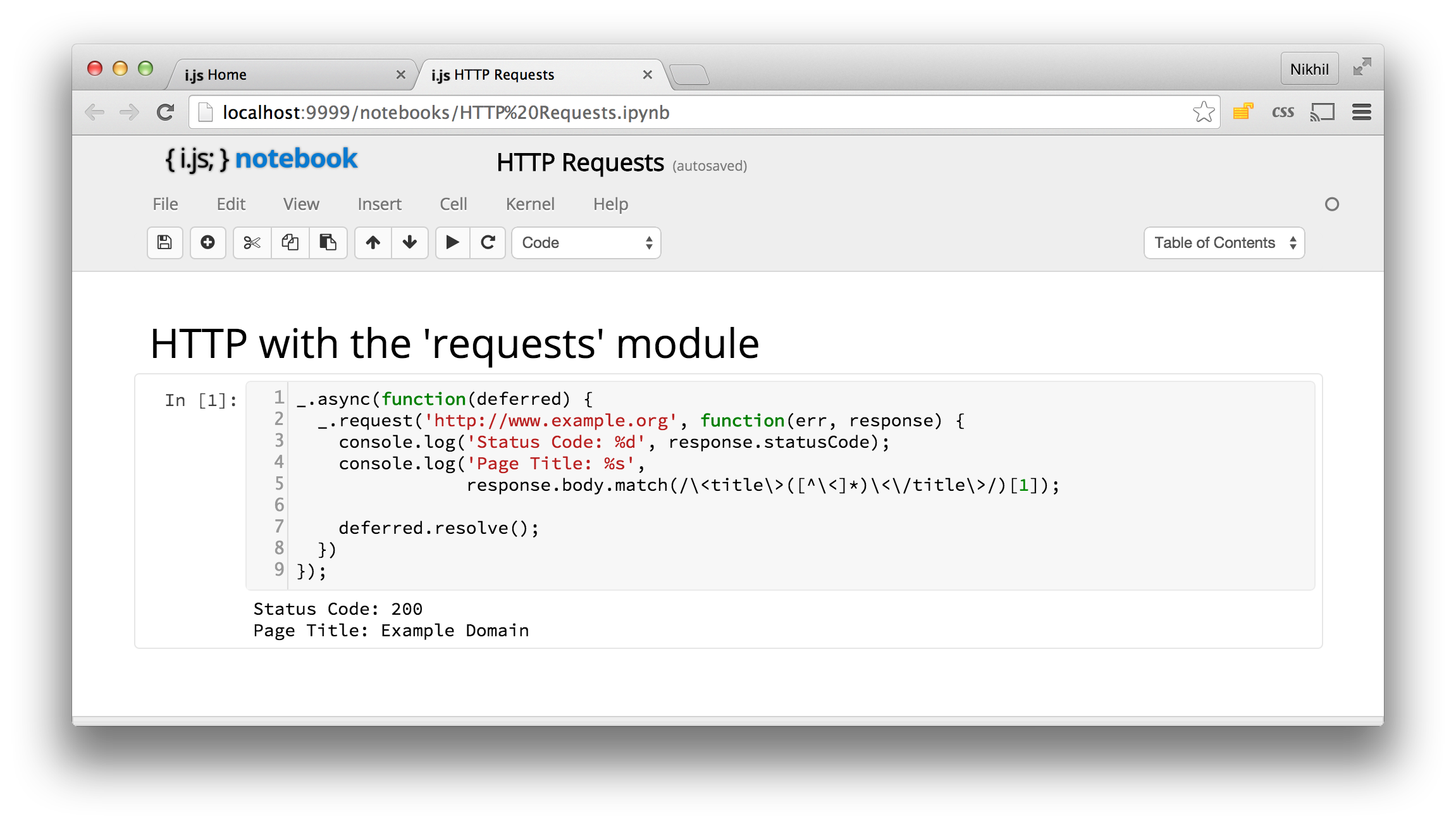 You can easily add HTML markup to your notebook using an %%html cell and client-script using a %%script block to use a variety of javascript libraries such as d3.js. 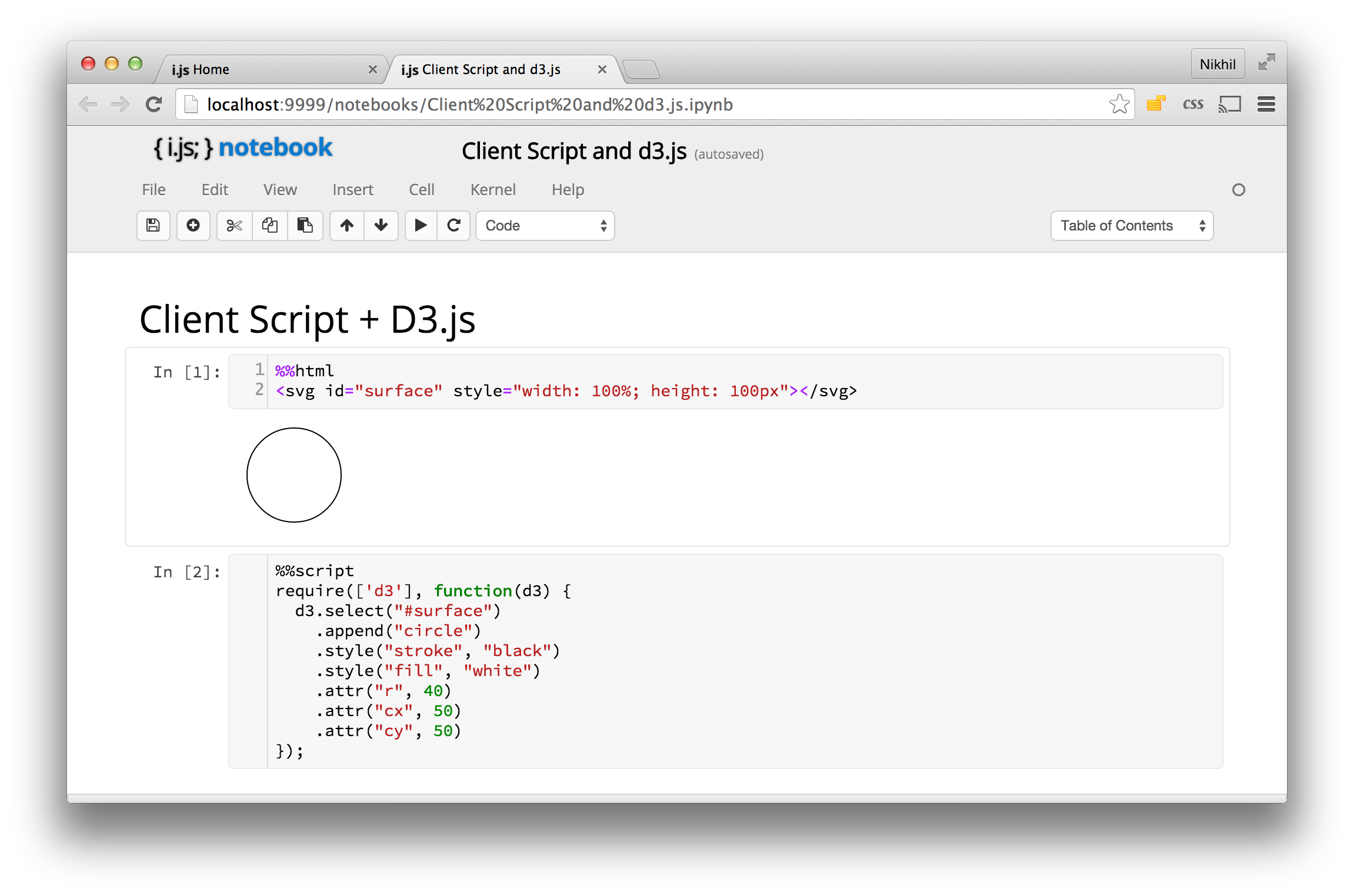