The Solax Cloud Plugin for Homebridge was created as a platform plugin to gather data exposed by Solax inverters to the cloud through the Solax Cloud API.

As HomeKit is still clueless about what a solar panel is, this plugin exposes a set of standard HomeKit accessories though Homebridge for each configured inverter that will allow interacting and automating your smart home based on the data made available from the Solax platform:

Battery information is also provided as Homekit accessories in case there are any batteries installed for any of the configured inverters:

Please note that additional accessories are created by default with smooth power consumption curves (by applying either a simple or exponential moving average to the power series). This prevents sporadic events like a cloud passing by to have an immediate affect on provided meters.

For this plugin to work, two critical pieces of information are required from Solax Cloud:

This plugin is supported under Homebridge. It is highly recommended that you use Homebridge Config UI X to install and configure this plugin.

Install this plugin using: sudo npm install -g homebridge-solaxcloud-api. Edit config.json manually to add your Solax inverters. See below for instructions on that.

Configuration parameters are described on the table below:

Configuration through the the use of Homebridge UI plugin is also available and recommended: 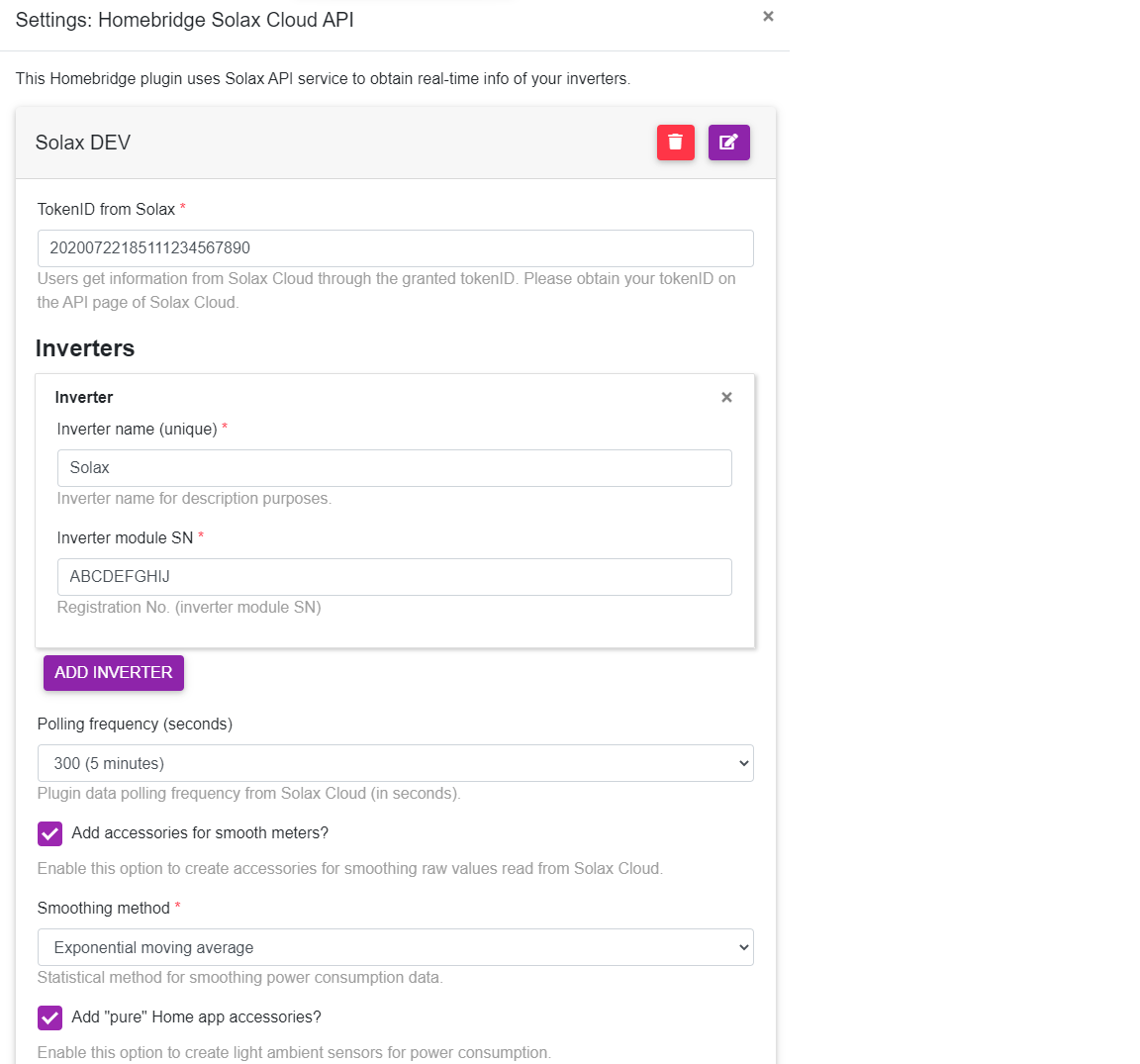 Non-standard accessory characteristics are available through the use of Eve for HomeKit app you may download from the App Store.

This will allow some non-standard characteristics to be visible along with its historical data (like power or total energy consumption), as depicted in the image below:

Automation can be achieved with the help of the virtual Update motion sensor that was specifically tailored for this effect and which is available for each inverter. This motion sensor will be triggered whenever inverter data gets updated from the Solax Cloud API (according to what is defined on the pollingFrequency configuration setting).

Motion is detected by the Update motion sensor whenever there is newly fetched inverter data from Solax Cloud. Using this sensor as a trigger combined with power and energy data from the virtual outlets enumerated above forms the basic building blocks for defining an automation.

Since automations are probably going to be dependent on the non-standard Consumption characteristics from the virtual outlets, these must created by using the Eve App.

As an automation example, let's imagine we want to turn a pool heater pump on whenever the inverter AC power is greater than a specific figure (in Watt):

Next planned plugin releases should include: