Homebridge Net Nanny, by GrumpTech, is a Homebridge dynamic platform plug-in that publishes metrics measuring the health of a network. This plugin was inspired by Dave Hamilton's, of the Mac Observer, 3-Ping strategy for evaluating network health.

The change history can be viewed here

Please refer to our security policy for information on which versions are receiving security updates and how to report security vulnerabilities. 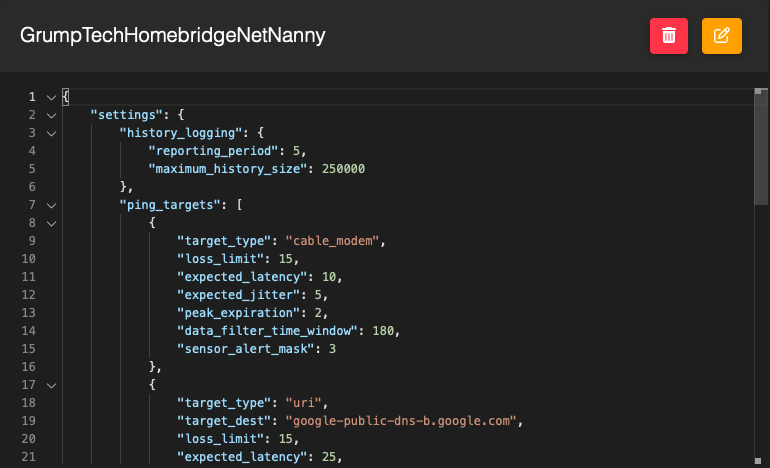 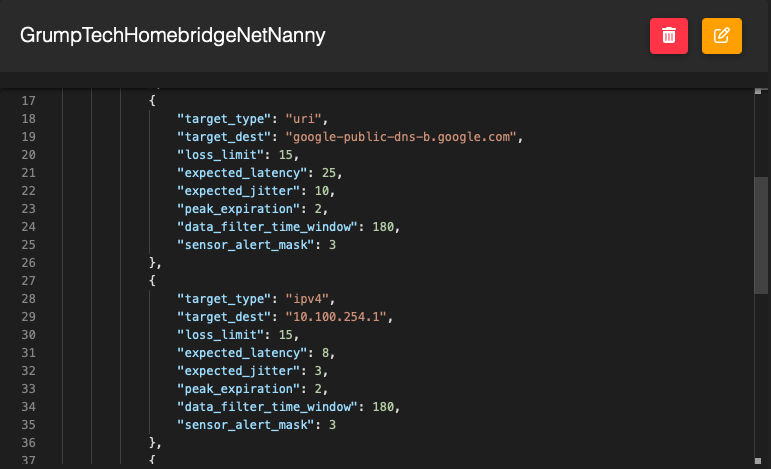 For details on the configuration settings, please refer to the Configuration Settings section below.

Additionally, especially if this system will be running other homebridge modules, it is strongly encouraged to run this plugin as an isolated child bridge. This setting page can be found by clicking on the wrench icon on the plugin and then selecting Bridge Settings. With the child bridge enabled, revisiting the setting page after homebridge is rebooted will show a QR code for pairing to the child bridge. The username (mac address) and port are randomly generaged by homebridge-config-ui-x. 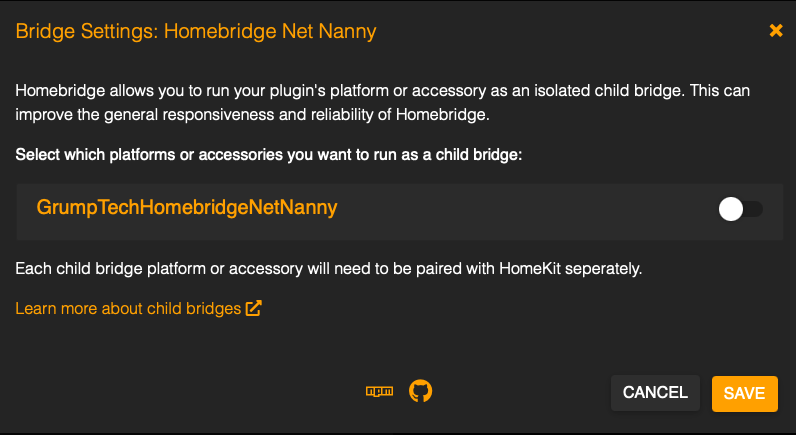 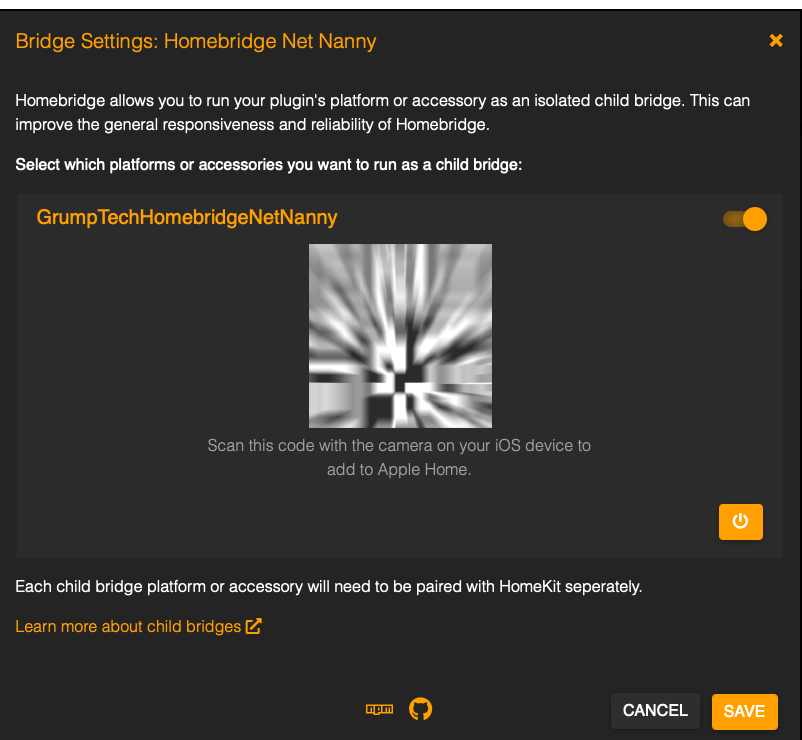 If you would rather manually configure and run the plugin, you will find a sample config.json file in the ./config folder. It is left to the user to get the plugin up and running within homebridge. Refer to the section above for specifics on the configuration parameters.

The plugin will create, or restore, a dynamic accessory for each network target specified in the configuration. Each accessory will advertise four services: (1) switch, and (3) carbon dioxide sensors. All of the data presented for the carbon dioxide sensors is the result of the ping results. In an effort to keep outliers from affecting the reported values, a user-specified number of outliers will be excluded from the moving average computation. The outliners that are excluded alternate between the highest then lowest values until the number of values to exclude has been reached.

Because the ping results can be noisy, the results are filtered using the AVT (Antonyan Vardan Transform) algorithm. The amount of data considered in the filter is implicitly set via the Data Filter Time Window configuration parameter on each network target. The size of the data buffer is computed as the ratio Data Filter Time Window to Ping Period. The larger this ratio, the more ping results that will be considered in the filter. The value reported by the filter is the median value after excluding the data points that are beyond one standard deviation. Therefore, one can assume that the alerts will not be detected until at least half of the Data Filter Time Window has elapsed with raw results that exceed the user specified limits. This should have the tendency to limit false positive detections. However, if the ratio is too small (not enough data in the buffer), then the reporting will be more responsive and alerts will be issued for transient glitches in the network performance that do not necessarially indicate a systemic problem.

It should also be noted, that the Detected value will not be set to abnormal until the Data Filter Time Window has elapsed after startup. This will prevent an occasional bad result from immediately resulting in the detection of abnormal carbon dioxide levels at startup.

When the accessory is inactive, the Active and Low Battery Status are set.

This module operates by using shell commands to the ping and route programs. At this time, the plugin assumes macOS output when parsing the results. While the ping output is consistent across operating systems, the route output is operating system specific. As a result, the gateway/router type selection is limited to macOS.

Refer to the bugs and enhancements listed here

Many thanks to all the folks contributing to Homebridge and to oznu for homebridge-config-ui-x, allowing for the possibility of this sort of fun and learning.
Special thanks to Dave Hamilton's, John F. Braun, and the MacGeekGab podcast for inspiring the idea for this plugin.

Refer to LICENSE.md for information regarding licensincg of this source code.