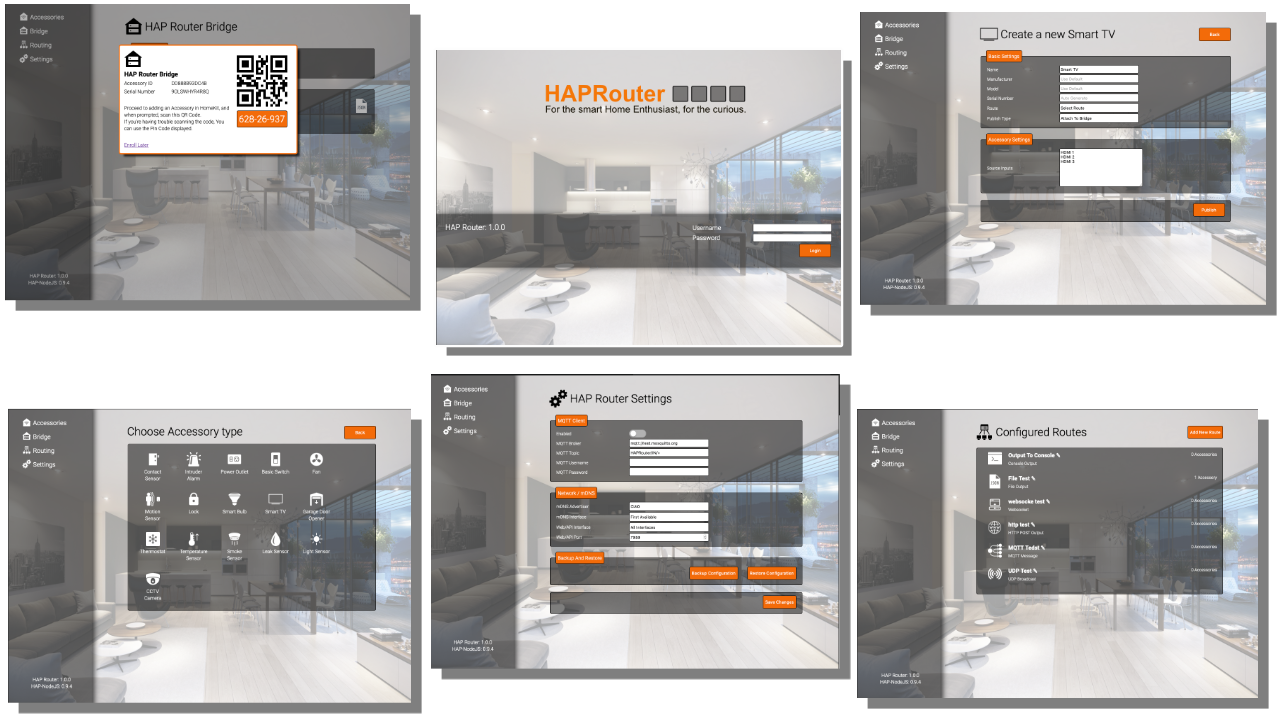 A Middleware HAP Router for bringing HomeKit functionality to your Home Automation.

HAP Router is a middleware NodeJS server that allows you to take advantage of Apples HomeKit technology, and bring it in to your automation ecosystem.

This is achieved by creating simple, software based accessories, that can be enrolled into HomeKit.

The difference however, compared to most implementations of this kind, is that the events that occur on them are directed (or routed) to a transport of your choice.

These transports can be a UDP broadcast, a message sent to an MQTT broker, sent to Node Red or any other automation platform.

The accessories have also been created for you, and you simply select the type of accessory you wish to create
and set their associated information.

Transports are the medium, in which the event is travelled. By default, the following transports (or routes) are available:

When I say 'by default' - what I mean here, is that you can develop your own route modules.

If you're a Home Automation Enthusiast, or just a tinkerer, Hap Router allows you to explore Homekit, and build with it.

Nice! how do I get started

The server is managed by a gorgeous looking Web User Interface (if the above images haven't already suggested so), It is a breeze to use, and at the basic level you:

Devices can be 'published' in 2 ways:

If you have Enrolled HAP Router in your HomeKit environment as a bridge, then any accessories attached to this Bridge, will be seen when published. else, you enroll the accessory as a separate entity.

HAP Router has a web based API, as well as an MQTT client built in.
The web API uses BASIC HTTP Authentication, and the login details are the same as the management UI.

To turn the fan accessory on at full speed using the web API, you will:
Send a post request to: http://{{IP ADDRESS}}:7989/api/accessories/8D6497BC70A1
And include the following POST body (with a type of application/json)

If you have enabled the MQTT client in the UI, the same message will be sent.
Just ensure the topic of the message ends with the Accessory ID.
By default the subscribed topic is HAPRouter/IN/+

HAP Router is based on the awesome HAP-NodeJS library, without it, projects like this one are not possible.