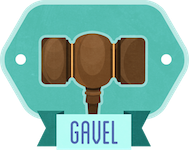 This repository contains implementation-independent behavior specification of Gavel. It's written in Gherkin, language used by Cucumber. Two main benefits are:

Examples are made in raw HTTP to focus on implementation independence.

To use the specification in your project and test against it, install it as npm package (or include as a git submodule):

It's also possible to get path to the directory with features from JavaScript:

Use Cucumber for testing.

Currently publishing of a new version of the generated documentation is done manually:

Steps 2-3 has been simplified as npm run docs:publish command.