Feedsme is a micro service that receive build completion notifications from carpenterd. When these notifications are received we will try to find all dependent modules on the package that was just build and send them in for re-build in carpenterd.

This ensures that all dependencies on your packages are always updated.

The module provides a bin/server script that starts the service. Run the service with npm.

When carpenterd queues a build it will trigger a POST /change on the Feedsme microservice with the package.json contents of the package that was built. The package.json is then processed in a few ways to allow tracking and triggering of dependent packages to be built. To make it concrete, a dependent package of package A would be package B if B has A as a dependency. So now if a new version of A is published, a dependent build will be triggered for B to get the changes made to A. The latest work we have done to this project, creating a release-line data structure ensures that this is safely based on the given semver ranges. Lets start to get into the specifics

The first step of processing a change event is to resolve the Dependent packages of the package sent to feedsme as well as resolve any possible DependentOf packages. We do this currently by inspecting the dependencies in the given package, and seeing which ones are also managed by warehouse. From this filtered list of packages, we then create the dependent mapping. The dependency itself being the root or parent package like A is above and the dependent being the child, similar to package B. Dependents is a lookup for the parent Package which has an array of the packages that depend on it.

DependentOf is the inverse of Dependent and rather than an array, assumes a single value. We don't allow there to be multiple parent packages for a given dependent. So the DependentOf record is created with the lookup being the dependency itself, like package B with the dependentOf value being the parent or package A.

These lookup tables are then used in the next step.

We now use these lookup tables to make decisions around triggering dependent packages and/or adding a dependent to the given release-line. Here we have a 2 different scenarios that influence our course of action.

Below we have diagrams of specific cases that we handle.

The premise for this diagram is that we have a package child@5.0.0 that depends on package root@^5.0.0. From here we go through a sequence of publishes and promotions via the typical warehouse system workflow. 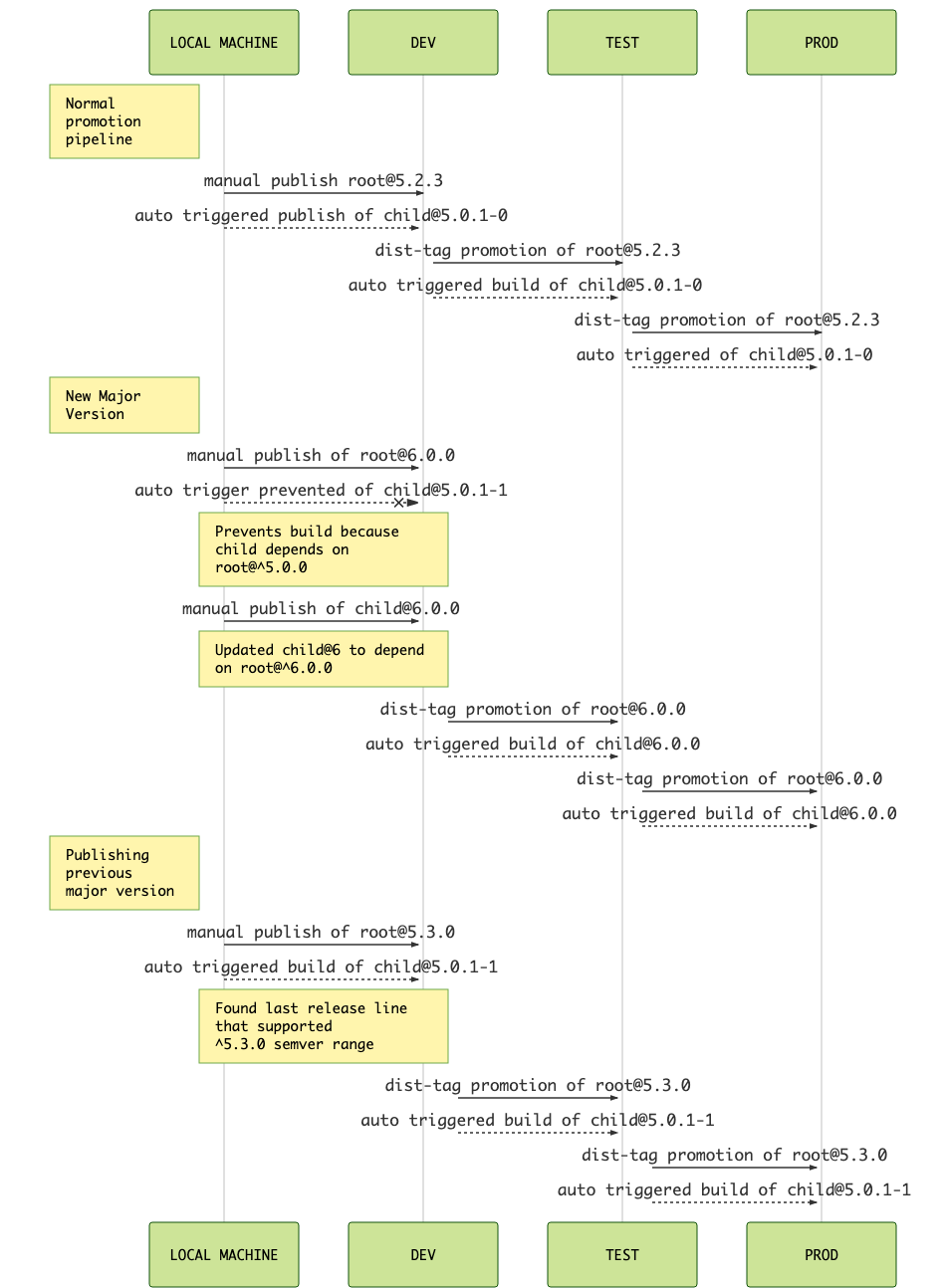 Cassandra should be running local. It can be installed through homebrew for MacOS or run the docker container from docker hub.