This is a JS npm package and some demo scripts for creating-, verifying- and getting started with Precise Proofs.

What are precise proofs?

Precise Proofs is a "privacy technique" based on Merkle trees to prove that some revealed parts of your document belong to the whole document without revealing other sensitive data For more information on Precise Proofs, please refer to EnergyWeb's Privacy wiki page.

to prevent injection/duplicate key attacks and the prover to create phony proofs.

What do you find here?

Heiko Burkhardt (@hai-ko), who did the heavy lifting and should get the credit for creating this implementation.

Then in a JS project:

Or in a Typescript project:

Unfortunately the code is not documented. For examples look into the demo files or read the good source. They are quite intuitive though.

After cloning the repo and installing dependencies, you can run the demo scripts with npm run demoX, where X should be replaced by the number of the demo you are interested in.

Simple proof generation and successful verification example which does not include the schema hash.

Simple proof generation with a bad proof and failed verification.

Demonstration of an identical key attack in the case you are not including the schema hash.

Lesson: you have to include the schema.

Demonstration that the prover can literally create any phony merkle roots and proofs if the schema hash is not included.

Lesson: again, you have to include the schema.

How an identical key attack looks like if you include the schema hash.

Lesson: if you see a published commitment & schema with 2 identical keys, you should not trust any proof for that. In the implementation, a duplicate key attack is only possible for the key first in the "abc" order, otherwise the verification simply fails (leaf position matters).

Publishing the merkle root / schema as a commitment to Smart Contract, which the verifier can interact with.

Please read contributing and our code of conduct for details.

We use SemVer for versioning.

This project is licensed under MIT - see the LICENSE file for details. 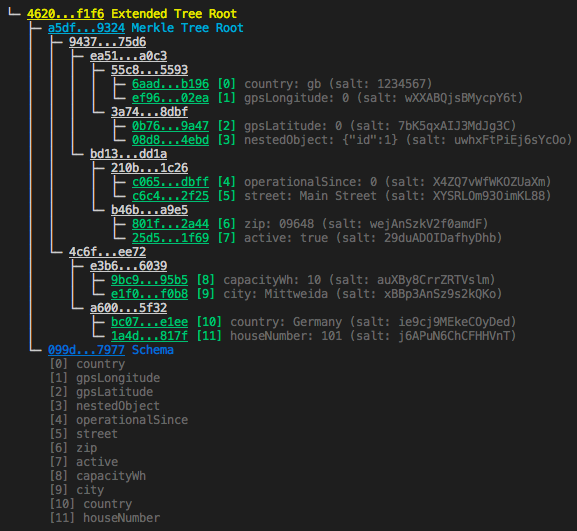