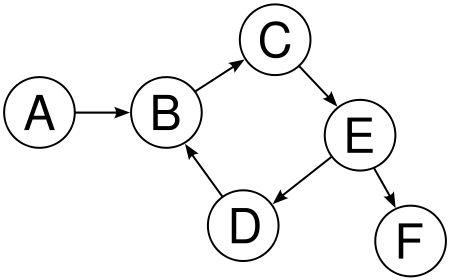 An implementation of a simple directed graph.

Basic operations you can perform on the graph are insertion and removal of nodes and edges.

To do so, you will need to create a new instance of the graph, by simply calling its constructor :

Insertions of a node in an instance of a graph is performed using the unique identifier of this node, which is represented by a string. Behind the scenes, a node in the Graph will be represented through Graph.Node objects, which will carry its unique identifiers, but also all the edges the node is attached to.

Note that adding a node in the graph using an already inserted identifier will have no effect on the Graph data model.

You can at any moment check whether the graph carries a given node either using its unique identifier, either by using a Graph.Node instance :

Note that if the edge's nodes do not exist in the graph, they will be automatically added.

You can at any moment check whether the graph carries a given edge either using its unique identifier, either by using a Graph.Edge instance :

Visitors are objects that allow you to browse the nodes of a graph. Two visitors are available in the current implementation.

It implements the following prototype :

If we print the sequence of nodes forwarded by the visitor using our example, it will result in ['foo', 'baz', 'bar'].

It implements the following prototype :

Routes are the representation of a collection of nodes along a given path.

It is possible through the APIs offered by the Graph interface to create and retrieve routes dynamically.

For the sake of simplicity and to demonstrate all the route management APIs, we will stick to the previous graph representation example used for the visitor interface.

This method will take a query as an input and will return a collection routes as an output. Let's walk through the various options made available by this method.

Resolving all the routes given a head node

It is possible for a client to compute all the routes in a graph having as head node a node N :

Note : The numbers in parentheses are the weights associated with each routes.

Resolving all the routes between two nodes

To compute all the routes, whatever their weights, between two given nodes you can use the following :

You can specify additional query clauses to the Graph.routes API to filter your request using a where object :

This method will use an optimized Breadth-First Search to determine whether the given Graph.Route is part of a graph instance.

This method is a helper that will let you map an array of nodes identifiers to an actual route in the graph.

It is possible to listen to particular events on a Graph instance since it implements the event emitter API. It is often useful to do so to add dynamic behaviour to the graph.

A good example of such a behaviour would be the ability to check for orphan nodes on each nodes or edges removal and to remove them if any.

You can listen to four events on the graph :

Grunt relies on Node.js and NPM to execute tasks, so you will need to ensure they are available on your build machine.

To install Grunt, its modules, and fetch the Bower dependencies of the project you will need to run the following command :

To run a build using the default task, simply run the following command :

Tests are available in the tests/ directory.

You can either trigger them using Jasmine JS and its HTML presenter by opening tests/index.html in a browser, or trigger the following commands :