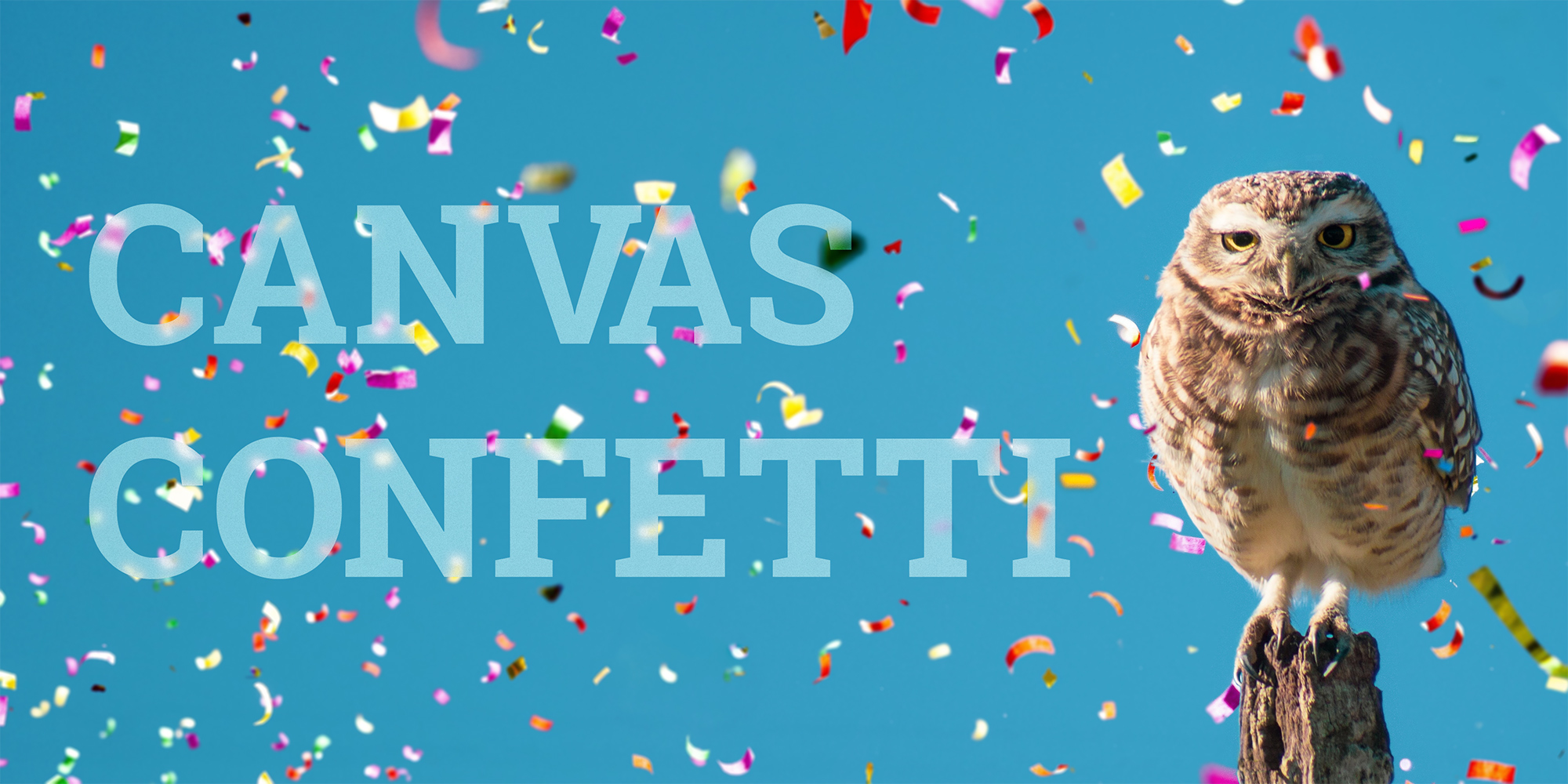 You can install this module as a component from NPM:

You can then require('canvas-confetti'); to use it in your project build. Note: this is a client component, and will not run in Node. You will need to build your project with something like webpack in order to use this.

You can also include this library in your HTML page directly from a CDN:

Note: you should use the latest version at the time that you include your project. You can see all versions on the releases page.

Thank you for joining me in this very important message about motion on your website. See, not everyone likes it, and some actually prefer no motion. They have ways to tell us about it and we should listen. While I don't want to go as far as tell you not to have confetti on your page just yet, I do want to make it easy for you to respect what your users want. There is a disableForReducedMotion option you can use so that users that have trouble with chaotic animations don't need to struggle on your website. This is disabled by default, but I am considering changing that in a future major release. If you have strong feelings about this, please let me know. For now, please confetti responsibly.

When installed from npm, this library can be required as a client component in your project build. When using the CDN version, it is exposed as a confetti function on window.

confetti takes a single optional object. When window.Promise is available, it will return a Promise to let you know when it is done. When promises are not available (like in IE), it will return null. You can polyfill promises using any of the popular polyfills. You can also provide a promise implementation to confetti through:

If you call confetti multiple times before it is done, it will return the same promise every time. Internally, the same canvas element will be reused, continuing the existing animation with the new confetti added. The promise returned by each call to confetti will resolve once all animations are done.

The confetti parameter is a single optional options object, which has the following properties:

This method creates an instance of the confetti function that uses a custom canvas. This is useful if you want to limit the area on your page in which confetti appear. By default, this method will not modify the canvas in any way (other than drawing to it).

Canvas can be misunderstood a bit though, so let me explain why you might want to let the module modify the canvas just a bit. By default, a canvas is a relatively small image -- somewhere around 300x150, depending on the browser. When you resize it using CSS, this sets the display size of the canvas, but not the image being represented on that canvas. Think of it as loading a 300x150 jpeg image in an img tag and then setting the CSS for that tag to 1500x600 -- your image will end up stretched and blurry. In the case of a canvas, you need to also set the width and height of the canvas image itself. If you don't want to do that, you can allow confetti to set it for you.

Note also that you should persist the custom instance and avoid initializing an instance of confetti with the same canvas element more than once.

The following global options are available:

Important: If you use useWorker: true, I own your canvas now. It's mine now and I can do whatever I want with it (don't worry... I'll just put confetti inside it, I promise). You must not try to use the canvas in any way (other than I guess removing it from the DOM), as it will throw an error. When using workers for rendering, control of the canvas must be transferred to the web worker, preventing any usage of that canvas on the main thread. If you must manipulate the canvas in any way, do not use this option.

Stops the animation and clears all confetti, as well as immediately resolves any outstanding promises. In the case of a separate confetti instance created with confetti.create, that instance will have its own reset method.

Launch some confetti the default way:

Launch a bunch of confetti:

Get creative. Launch a small poof of confetti from a random part of the page:

I said creative... we can do better. Since it doesn't matter how many times we call confetti (just the total number of confetti in the air), we can do some fun things, like continuously launch more and more confetti for 30 seconds, from multiple directions: