This project was used during Hackweek 2017 and stripped of all it's node only dependencies so it could run in the browser. It was only used with Collaboration Processes

BPMN execution is deemed to be a good way to describe process oriented business logic. This is especially true if we have to describe the orchestration and collaboration of service- and UI-interactions. Many of these interactions are asynchronous and event driven making Node.js an ideal candidate for implementing a BPMN engine. To draw the BPMN file to be executed each BPMN 2.0 compliant tool can be used.

The e2e-transaction-logger package can be used optionally. The generated transaction log files enable the E2E Dashboards to provide graphical views of your processes. You may learn more about our efforts and other Node.js packages on http://e2ebridge.com.

The easiest way to install it is via NPM:

If you don't have a compiler on your platform the restify dtrace dependency won't be installed. Just ignore it.

Process can be managed or unmanaged. Unmanaged processes are not stored in any way, the developer is responsible of storing the returned process objects to be able to use them later. Process manager allow to create multiple processes and store them during their execution. The managers have functions to retrieve existing processes by id, filter by property or state. Managers will also persist the managed processes if persistency options are set.

This is a very rough work in progress and we're not providing any official support.

These following samples assume that you installed bpmn via npm.

then this process can be created by

Processes can also be created from an xml string instead of file. In this case the handler can be an object or a javascript string that would be parsed.

If no handler is defined, the default handler is being called. This handler can also be specified in the handler file by:

Besides the default event handler, it is also possible to specify a default error handler:

Sometimes it is useful to call handlers before or after each activity, task, or catch event. To do this specify

The handler names are derived by replacing all not allowed JS characters by '_'. For example, "My decision?" becomes My_decision_. The bpmn module exports mapName2HandlerName(bpmnName) that can be invoked to get the handler name for a given BPMN name.

If the following process has to be implemented, we have to provide three handlers for the exclusive gateway:

Note: For each outgoing transition we have a condition handler that hast to evaluate synchronously. So if backend data are required, fetch them in the gateway callback. Furthermore, BPMN does not specify the order of evaluating the flow conditions, so the implementer has to make sure, that only one operation returns true. Additionally, we ignore the condition expression. We consider this as part of the implementation.

Boundary timer events are timeouts on the activity they are attached to. To implement timeouts use two handlers: 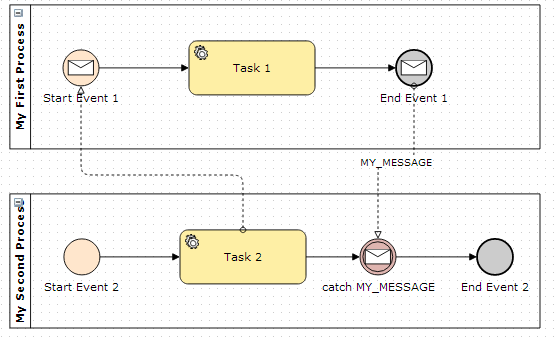 These processes must be created together:

The collaboration of the processes is then implemented in the handlers. For example, it is possible to get a partner process by name and then send an event to this process. This is frequently done to start the partner process:

However, another option is to get all outgoing message flows and send a message along these flows. In the current example we have exactly one flow, so sending the message is done by:

Note: all task and event names must be unique

Or within a handler:

By default, logs are written to the console and ./process.log. Of course, this can be changed. For details see the section Log Transports.

We use winston as log library. This allows as to define different ways of storing our logs by defining so called winston transports (for details see here). The default transports used by this library are

Note: the directory containing the log file must exist, otherwise an error is thrown.

Of course, transports can be removed as well, e.g.:

Process managers are used to create multiple processes using the same definitions and find them back later.

If the process id is already used an error is returned.

If the manager have multiple bpmn definitions a descriptor object must be passed to the create function.

To create collaborating processes and array of descriptors must be passed to the create function.

Process definitions and handlers can be add in the manager creator or using add* functions.

Note: If no handler is found for a process definition an error is thrown.

If no processHandler is passed we try to load the corresponding javascript file to the bpmn file. If no handler is found or defined before for this definition an error is thrown.

If no processHandler is passed and no handler was defined before for this definition an error is thrown.

Existing processes in a manager can be retrived using these functions:

The manager constructor also takes persistency options. The engine will save the state while waiting for a task being done. After a manager is created with persistency options all stored processes can be retrived using the functions above. The process can be persisted to the file system or to a MongoDB. We recommend the latter approach for productive use cases.

Main module is an instance of ProcessManager

The main bpmn module is an instance of ProcessManager without options meaning you can use manager functions directly from it.

The above API can also be called by REST HTTP calls. To do this, you have first to instantiate a server from ta manager. For example:

The server is a node restify server. So all features of this package can be used. The full signature of createProcess is

The following sections describe how a client would use the REST API provided by the server above. The API calls are illustrated using the restify client library.

When receiving this request the server will use the urlMap to find the BPMN file associated with the process name in the URL, instantiate this process and return the process state in the response body as a JSON object:

The process has now been created but not yet started! Thus, state, history, and properties are empty. To do this, you have either to send a start event using a PUT request (see below) or you can create and start the process in one go by appending the start event to the process URI:

If the MyStart event handler sets a process property such as

Getting the process state, history, and properties

To the current state, history, and properties of process use

The returned object is the same as in the last POST request. Following REST convetions, the operation giving all processes of a given type is

Or if is also possible using query strings. For example, the following query returns all processes having property x containing the attribute y having the value uvw

It is also possible to query processes executing a task, an activity, or waiting for an event to happen by sending the following request:

Of course, all queries can be combined in one request.

Both is done by send a PUT request containing the send message or triggered event data as body: