Architectural Toolkit that unifies most of the common libraries used nowadays to simplify project setup and code development in general.

If the following technology stack is your choice or you just simple love developing web-apps using these libraries, please checkout this project.

Boneyard also, provides a minimalistic implementation of a Inversion of Control (IoC-like) pattern for Javascript running in the browser, to help you decouple business logic from his composition.

While I personally consider it experimental, because most of the logic implemented and the internal mechanisms to solve dependency injection need to be tested directly in the field with real web-apps, the usage of this package is optional either, if your decide to use it to wire all the pieces completely or partially.

Also, this IoC package was inspired by the module wire.js of CujoJS Project. It essentially establishes a good architectural foundation for your project and keeps the separation of concerns as clean as possible. So, you will find some similarities while declaring specs using Boneyard.

Boneyard was empirically crafted by following common good practices discovered while developing web apps using backbone/requirejs libraries. However, boneyard is still not recommended to be ran in production environments but for experimental purposes only, due to the fact that the patterns and decisions that made up this toolbox are going to be subjected to change over time. As long as the community will provide feedback based on their experiences using this toolkit to keep improving the original idea until the tool itself will reach a certain level of maturity to consider it production ready. Be aware of possible bugs or missing functionality, specially in the bootstrap-ui module. I will be fixing those as soon as I can.

The library itself is distributed on bower. So, to get the distribution you run:

However, Boneyard also ships with an optional tool called Boneyard Composer that is only published on the NPM registry (See 'Usage' section below). This tool is a simple utility that in general you will run only in development mode. In your project root folder, you simply run:

If you've decided to give Boneyard Composer a shot, this tool may help you with the development process.

Boneyard Composer, is a simple command line tool that allows you to test your modules/components code in real time. Just by using a config json file, it will generate a temporal folder and spin up a server to serve all your source code so you can access it within a browser to check the results.

Also, the server will be listening for code changes (whenever the source code changes, the browser will reload automatically). This should be very useful, especially while building spec configurations file from the Boneyard IoC package. It can be a tool to consider inside the development process to integrate it with Unit Test frameworks, less/sass based themes development, HTML template packages compilation and so on. 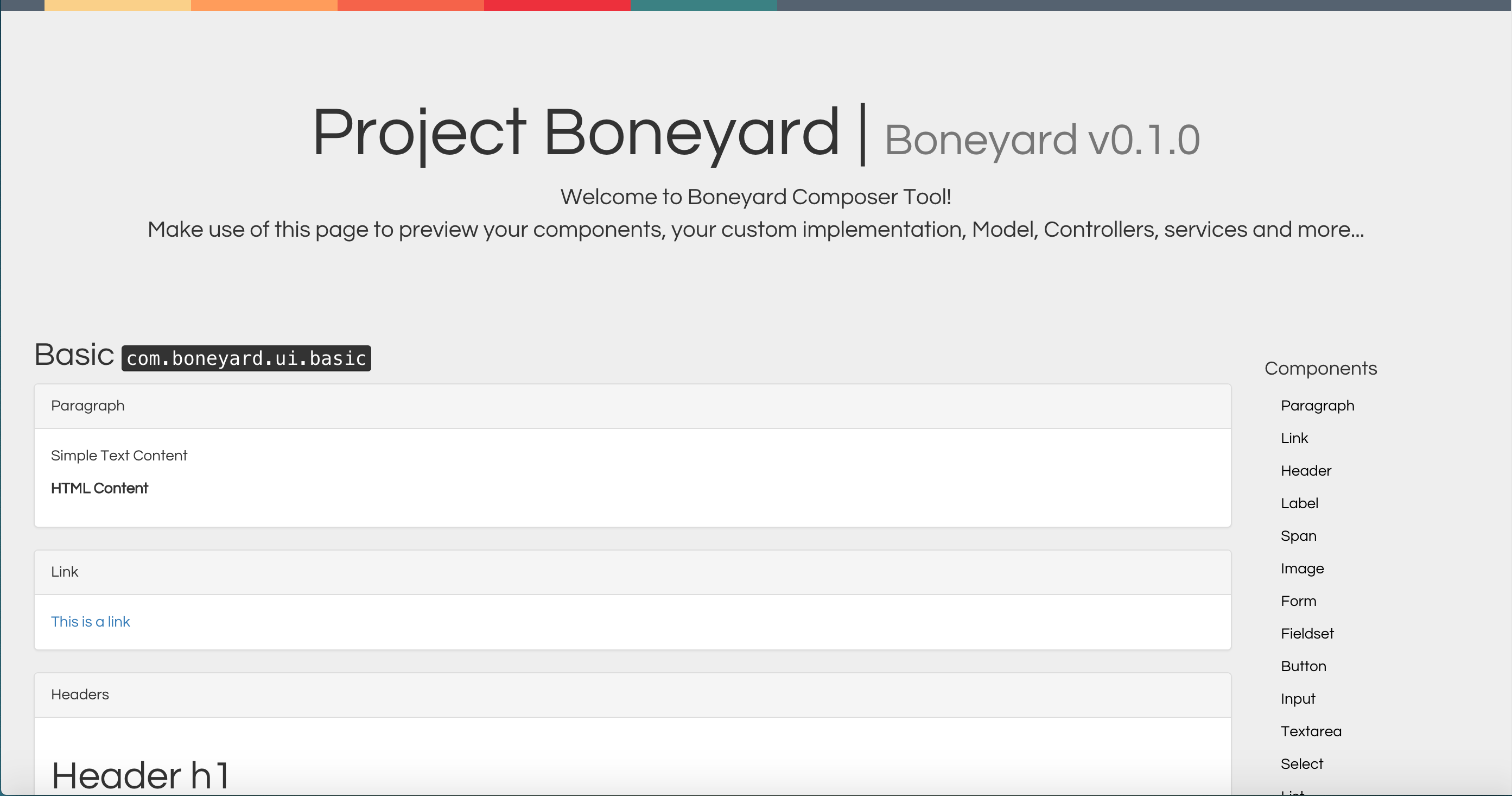 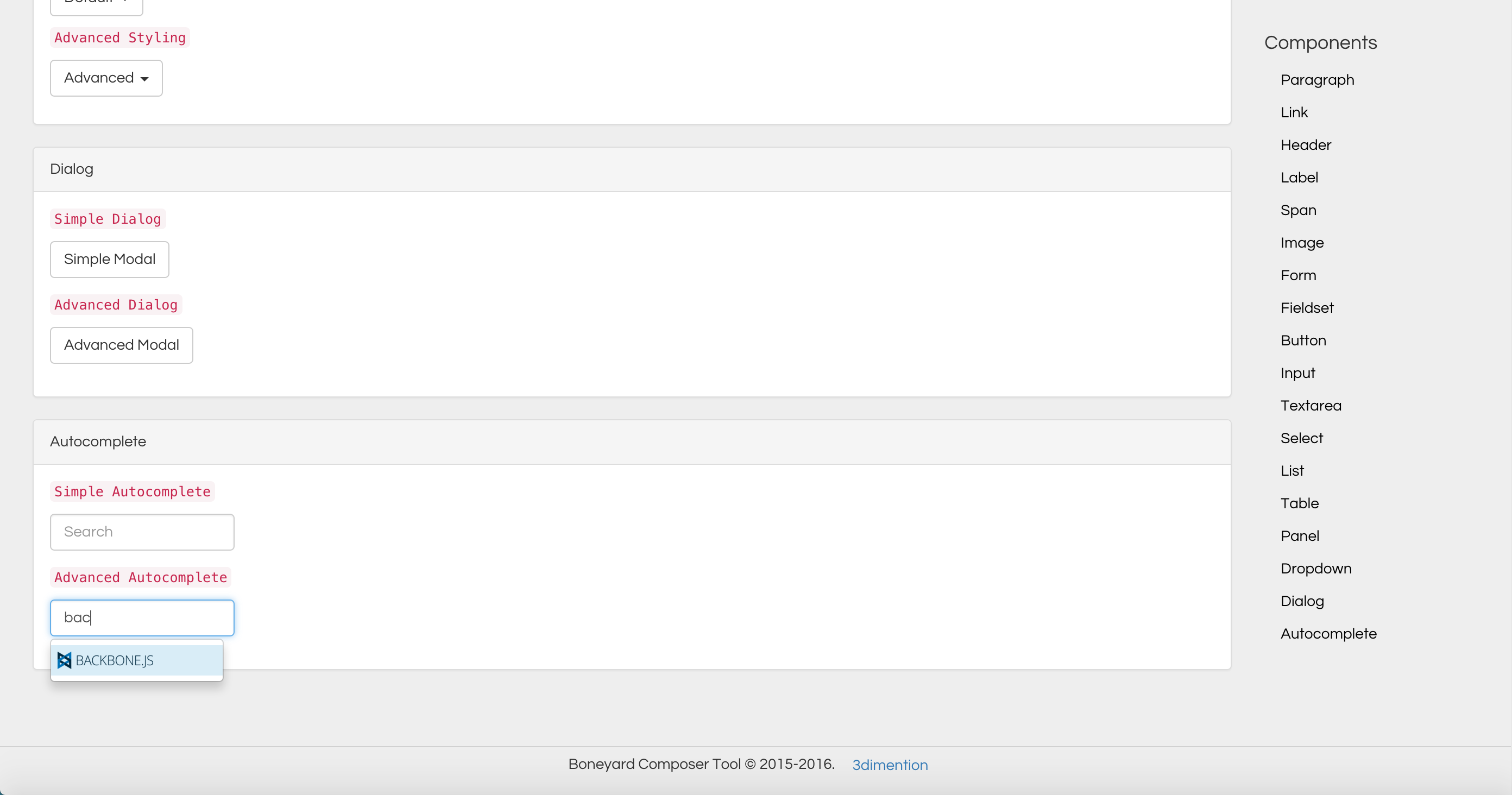 Please, visit the documentation related to the usage of this tool.

If you want to provide feedback, suggest changes or simply check the source code, here are some quick notes and steps after pulling the code from master.

In this first personal project, I found myself learning a lot about the javascript world, the history behind the language and particularly the big challenges that browsers present nowadays.

You will probably notice that even though I decided to ship Boneyard with a boneyard-ui package (Simple Backbone.View "classes" that spits out some html chunks, in combination with some bootstrap css styling rules and a basic api, I'm definitely not a big fan of the DOM implementation and the HTML declarative format at all as a creational pattern.

With that being said and along with the development of this library, I found completely difficult (and annoying) for the sake of a good development process, to let a declarative format resolve the concept of child > parent relationship structures of a web app <div><dom-tell-the-browser-to-create-a-combobox-inside-this-div></div>, when in fact this level of details makes different moving parts very hard to keep track. De-structuring probably was one of the major goals on this project, by providing techniques on how a developer can efficiently wire or establish structural relationships between elements.

I think that javascript as a programming language can transcend the browser, it can be "detached" from the concept of the DOM as that was its primarily usage back in the old days. As time passes, we've been realizing that the concept of a web app has started to become more and more complex, so thinking of the DOM as a simple "interface" (one way to describe web apps) should release Javascript from all assumptions to let it evolve into something different with multiple possibilities. Its best to put abstraction, good practices and design patterns in place right from the beginning when defining your project's specific scope, instead of starting from something that was meant to be too verbose and plus, relying on a third-party organization to define a standard to follow.

I strongly believe that the web development experience could be a more enjoyable place.