No, not that Mr. Blobby.

Blobby is an HTTP Proxy for Blob storage systems (such as S3) that automatically shards and replicates your data. Useful for single and multi datacenter architectures, blobby scales your storage and throughput requirements by way of sharding, as well as enables fast local reads in multi datacenter replication setups. Additionally blobby provides a simple CLI for analyzing your complex data architectures by way of storage comparisons, repairs, stats, and more. 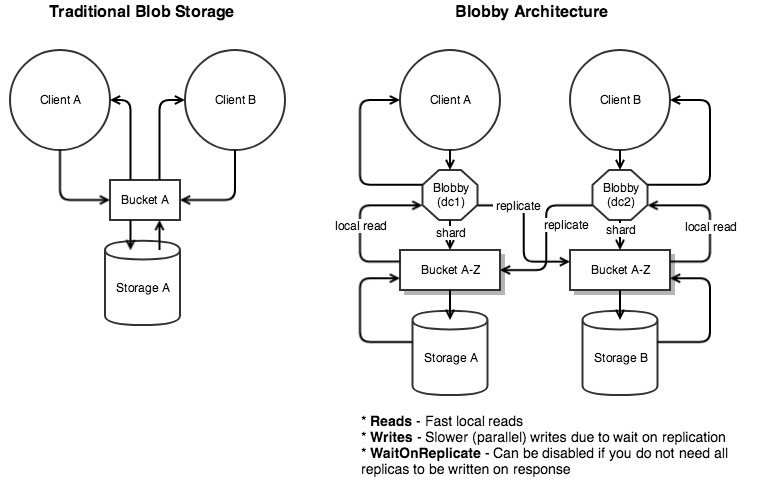 Blobby can be installed as a local dependency of your app:

A number of configuration formats are supported, including JSON, JSON5, CommonJS, and Secure Configurations.

Example for creating a secure configuration:

Default permissions will be applied via storage.{id}.accessControl, but can be overridden via the x-amz-acl header, like so:

The above examples is a perfect segway into Secure API Operations.

As indicated in Configuration, storage.{id}.auth is required to support uploads and deletes.

If you're creating your own Authorization handler, you can export a module with the following format:

Your handler can be synchronous or asynchronous, but cb must be invoked in either case.

As indicated in Configuration, storage.{id}.replicas is required to enabled replication. An array of one or more replicas can be provided, consisting of the storage identifier and optionally the configuration if the desired storage exists in a different environment (such as replication across data centers).

Format is [ConfigId::]StorageId, where ConfigId only needs to be specified if from a different environment.

Example of two replicas, one from same environment, other from a different environment:

Important: Successful uploads (PUT's) and deletes (DELETE's) are only confirmed if all replica's have been written to. This is to avoid data inconsistencies and race conditions (i.e. performing an action on an asset before it's been written in all locations). In cases where speed is more important than consistency, querystring param waitForReplicas=0 can be set. There is no way to turn off replication without removing from configuration, so this option will only return success once the local storage is successful. The downside of this approach is that high availability is expected for every replica, and uploads (or deletes) will fail if one of the replica's cannot be written to.

For comparing the difference between storage bindings and/or environments. This is a two-way comparison. Use check instead if you only want to do a one-way comparison.

Example of comparing one binding across 2 datacenters:

For repairing the difference between storage bindings and/or environments. This is a two-way repair. Use copy instead if you only want to do a one-way repair.

Example of syncing data between old and new storage:

Example of syncing one storage across 2 datacenters:

Query statistics against your storage(s).

Example of querying stats for a single storage:

Useful one-time initialization required by some storage drivers, such as pre-creating shard buckets in S3.

Example of initializing a single storage:

Useful for identifying the location of a given directory for storage drivers that support sharding.